The 11th most popular snowboarding destination in Colorado.

East of Steamboat Springs, the Steamboat ski area has 165 runs spread over 2,965 acres that are served by 16 lifts with a maximum descent of 3,668 feet. The runs have a level of difficulty ranging from 15% beginner to 40% intermediate to 45% difficult. The best snowboarding in Steamboat is typically found during the months of January and February.

With over 325 inches of snowfall annually, Steamboat is actually a complete mountain range consisting of Mount Werner, Sunshine Peak, Storm Peak, Thunderhead Peak and Christie Peak known for champagne powder and plenty of glades and chutes. And, north of the resort boundary, there is sidecountry to explore up Fish Creek Canyon. Just keep in mind that Steamboat Ski Resort is not known for its annual snowfall, but does get a few good storms each season.

The resort has taken its halfpipe and supersized it. Mavericks, the superpipe, is named after central California's famous big-wave break and is reminiscent of Steamboats western heritage. Mavericks, the largest superpipe in the Rocky Mountains, tops out with 18-foot walls, is 450 feet long and 56 feet wide. In addition, a longer transition area enables a smooth flow between tricks for superpipe enthusiasts. Mavericks dirt skeleton, constructed this summer, means the pipe is scheduled to open in early December. In addition, the terrain park will also be open with rail slides, bumps and jumps to try out your tricks. Mavericks and the terrain park are open to both skiers and riders.

When it comes to gladed snowboarding, Steamboat has a well-deserved reputation. In particular, the Shadows area has a 2,000 foot gladed descent through alpine spruce and aspens.

After a long day of snowboarding at Steamboat, the best options for apres ski are either the T-Bar at the base of the Thunderhead lift or the Gondola Pub. For some nightlife, you'll have to head into downtown Steamboat Springs and head over to Schmiggity's.

Keep in mind that the ski area is not located in the town of Steamboat, but there is a convenient bus system interconnecting the resort to the town. So, you'll have to decide if you'd like to stay in town near the nightlife, or up a the resort for easy first tracks.

To reach the snowboarding at Steamboat from Denver, head west on US70 to Silverthorne Exit #205. Head north on SR9 to Kremmling. Turn left heading west on US 40 to Steamboat Springs. To reach Steamboat by air, the closest airport is in Hayden to the west. If you fly into Denver International Airport, the drive over can be hairy if the passes are snowy.

TIP: For the Winter 2019/2020 season, the old base area gondola has been replaced with a higher speed / higher capacity gondola. This should greatly reduce the lines at the base area as it has 38% higher capacity.

Overall, Steamboat Ski Resort is the 11th most popular snowboard & freeride destination of all 30 snowboarding resorts in Colorado. 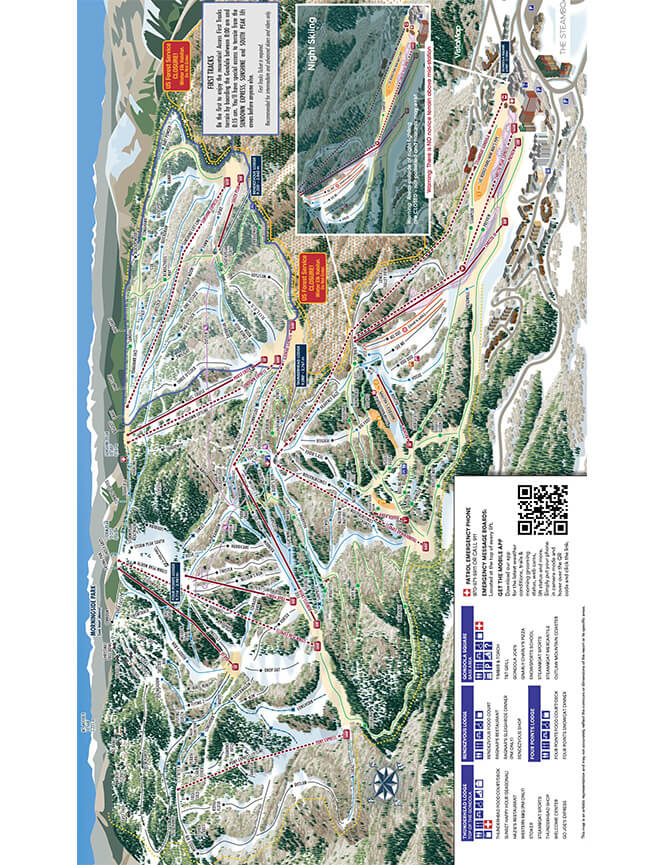