The 3rd most popular snowboarding destination in Austria.

Southwest of Salzburg, the Kitzbuhel ski region has 60 pistes served by 56 lifts accessing 180km with a maximum vertical drop of 1,300m. The ski runs are spread across numerous mountains on both sides of this quaint old town. The groomed pistes stretch 17km from Kirchberg in the west to Pass Thurn / Mittersill in the east. While the base elevation is lower than many other ski areas in the region, the higher slopes do have reliable snow cover.

Most snowboarders really don't realize how much backcountry freeriding there is throughout the Kitzbuhel ski region -- it is quite extensive. To start exploring the off-piste terrain, try one of the many excellent ski routes, including Ski Route #34 from the west end of Lift 3S leading down to Jochburg, and Ski Route #33 off the Steinberg Kogel lift leading down to Hechenmoos ski bus stop. Another line worth exploring is from the top station of the D6 lift where you can follow the remote Route #56 all the way down to the Aschau bus stop for a ride back to town. For both, make sure to get the bus time tables ahead of time to ensure a ride back to town.

On the first day in Kitzbuhel, there is a great loop that explores the entire area known as the Ski Safari. Start by heading up the Hahnenkammbahn and follow the elephant signs. They route you across the 3S Gondola chasm to Wurzhohe and then head to the top of the Zweitausender for a vista of Grossglockner. The entire loop plus lunch should take all day.

While there are pistes and ski routes from the Hahnenkamm summit back down to town including the infamous Streif, they are not that great and are worth doing only once at the end of the day. Since it is north facing, expect it to be pretty hardpacked and icy.

If you are looking for some challenge, head over to the Ehrenbach stretch of the Hahnenkamm and then down the steeps of the Ehrenbachgraben bowl. On a solid powder day, head up Steinbergkogel and check out Ski Route #33. For late day powder, check out the Kitzbuhel Horn via the Raintel chair, and on the black runs under the Steinberg-Kogel lift. Just before your done at Kitzbuhel Horn, ride down Ski Route #5 or #6 under the Hornbahn leading to the base area.

If you are in the mood for some glades, check out the off-piste freeriding from the Gauxjoch hut down into Alte Wacht and Bichalm.

If you've been to Kitzbuhel any time in the past decade, you'll probably recall the CAT skiing operation in the old Bichlam ski area located east of Kitzbuhel and north of Aurach. Recently, the single lift in Bichlam has been resurrected and the CAT skiing has been moved to the 150m above the top station. After a few laps at Bichlam, take your last run down Ski Route #51 which leads to a remote bus stop.

For the freestylers in your crew, the Kitzbuhel terrain park is located in the Resterhohe Sector. It's not particularly well known, but is high enough for sure snow.

After a solid morning of shredding, look for the on-mountain Bruggeralm restaurant near the Talsen lift. There are other good mountain huts on the pistes leading down to Skirast including Usterwies, Gauxer Stadl and Kitzalm.

When you are ready for some apres ski action, you'll find that the options in Kitzbuhel are pretty limited at the ski base areas. The best bet is Streifalm at the Hahnenkamm base. For a traditional Austrian dinner, try Alt-Kitzbuhel for local flavor in a casual environment. For nightlife, make sure to check out the Pavillion near the Hahnenkahm, Mangos nightclub, Club Take Five or Club Python.

The town of Kitzbuhel makes a great base for exploring. Located on a gentle hillside, the old village is charming with colorful pedestrian zone. The train stops in the middle of town close to the Hahnenkammbahn gondola base station, so try to stay close to there to easily access the pedestrian zone and the slopes.

To reach this area from Salzburg, follow Route 215 west through Germany. Near Lofer, head west on Route 704 and then head southwest on Route 312. Near St. Johann, head south on Route 161 into Kitzbuhel. There are two free ski buses that run a loop around Kitzbuhel and also up to Pass Thurn.

PRO TIP: If all the snowboarding in Kitzbuhel isn't enough for you, ride down to Aschau and take the bus to the lift leading up Gampenkogel, which is part of the adjacent Skiwelt Wilder Kaiser-Brixental ski area which requires a separate ski pass.

Overall, Kitzbuhel is the 3rd most popular snowboard & freeride destination of all 79 snowboarding resorts in Austria. 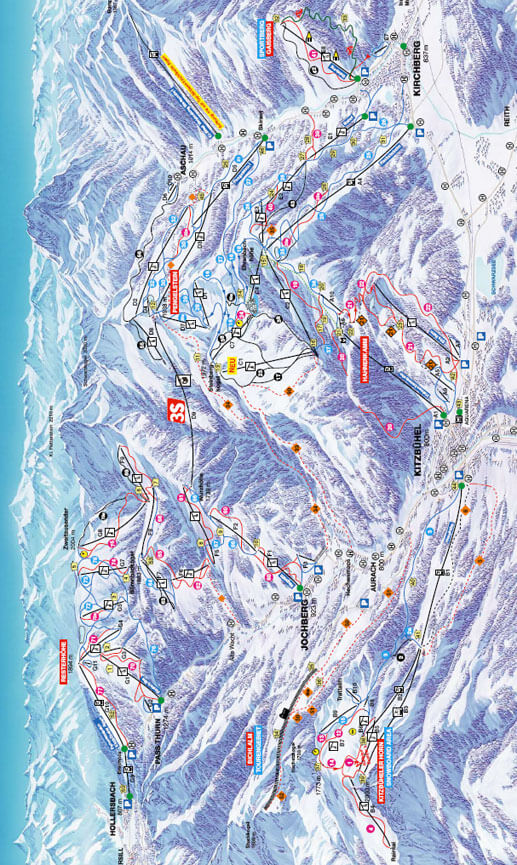