The 2nd most popular snowboarding destination in Japan.

Southwest of Sapporo near Hirafu, the Niseko United ski resort consists of four ski areas encircling the large Yotei-san volcano that offers up plenty of groomed and out-of-bounds snowboarding. While the courses are not particularly steep, they are known for consistently light, deep powder (up to 15m annually) coming across from Siberia. Many riders consider Niseko to have the best powder in Japan.

On a first trip to Japan for snowboarding, Niseko has to be at the top of the list. Niseko United is the largest ski area in Japan. The four interconnected areas include Niseko Annupuri ski area, Niseko Higashiyama ski area (Niseko Village), Niseko Grand Hirafu ski area and the smaller Hanazono ski area, which is known for glades and side-country riding. Overall, there are 30 lifts serving 61 courses (20 courses are advanced) with a maximum vertical descent of 950m.

The Grand Hirafu is the most popular of the four and has an excellent open gate policy to access vast open powder fields. Overall, there are nine backcountry gates existing Niseko (a guide is highly recommended). While off-piste and glade riding is permitted, make sure you don't duck any ropes protecting forbidden areas. Speaking of powder, you can expect to find pretty good powder stashes all season long in light of the massive annual snowfalls. The best time of year for snowboarding Niseko for deep powder is from January through mid-February.

For the freestylers in your crew, unfortunately there are very limited terrain parks at Niseko United. The main option is the King Park located near the Hirafu gondola base area. The King Park has tabletops and jibs to explore.

Unlike the rest of Japan's ski areas, there is actually some apres ski partying and nightlife at Niseko, courtesy of the Australian riders. If you are looking for some apres ski action, check out GyuBar (aka Fridge Door), Yummys, Fattys or the Ice Bar. For late night, head to the Red Bar, Jam Bar, Blo Blo, Splash or Wild Bills.

To reach the snowboarding at Niseko United by plane, fly into Sapporo New Chitose airport (CTS) on the southwest side of Hokkaido just southeast of Sapporo. There are numerous direct inter-country flights from Tokyo. From the airport, there are several shuttle bus options to the various Hokkaido ski resorts. From the airport, there is a shuttle bus service provided by Hokkaido Resort Liner. It takes about 2.5 hours on the bus to head to Niseko which is 100km to the southwest of Sapporo. Alternately, there is a train from Sapporo (JR) to Niseko. While at the airport, make sure to use their ATMs since they can be quite hard to find at the resorts and credit cards are rarely accepted.

In addition to flying into Sapporo from Tokyo, there is also a train tunnel connecting Hokkaido Island with the main Honshu Island. The train route from Tokyo northbound passes through Aomori, and the total trip takes between 9 to 11 hours.

Note - keep in mind that the ski areas on Hokkaido are not known to be particularly steep, but they are well known for big snow fall. They are also popular for their onsens, which are hot thermal spring-fed indoor or outdoor pools (be aware that they are usually naked pools). Get ready to be immersed in Japanesse culture and enjoy the plentiful hot spring spas known as onsens, such as Niseko Ground Service. But, keep in mind that Niseko has become quite popular with young Australian snowboarders on holiday. Also, you will want to avoid coming during Chinese New Year since it is overwhelmingly crowded.

Tips - If you are looking for some fresh powder lines, try contacting the Niseko Hanazono Powder Guides which offers guided first tracks on untracked slopes starting at 7:30am. It is operated by the ski resort. Also, the Niseko United is now part of the US-based Vail Resorts' Epic Pass where you can get a handful of ski days at Niseko using the Vail pass. 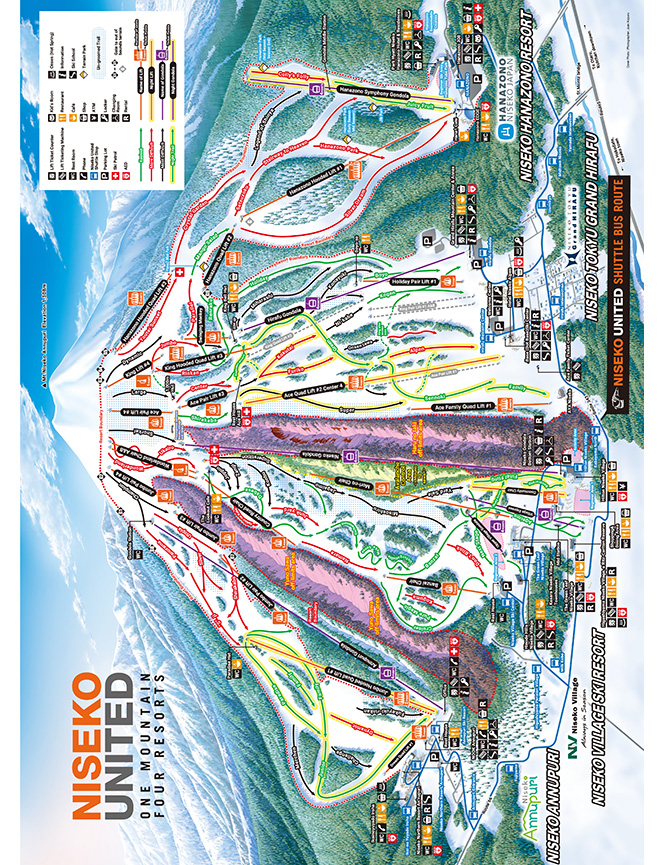