The 3rd most popular snowboarding destination in Colorado.

West of Denver and south of Frisco, the Breckenridge Ski Resort has 187 runs served by 24 lifts with a maximum descent of 3,398 feet. The ski area is spread across several named peaks, which necessitates a lot of traversing to get between each. But even with all that vert and size (3,444 acres), Breck isn't known for its big mountain riding due to only short steep pitches connected by flats. The ski area averages about 350 inches of snowfall annually. The best snowboarding in Breckenridge is normally found during the months of January and February.

Since the runs leading down to the several base areas are pretty flat and congested, most of your time will be spent on the upper half of the ski area. Therefore, while the listed maximum vertical is 3,398 feet, the practical vertical of typical laps will be around 1,500 feet. Keep in mind while planning your laps, there are quite a few slow upper lifts, including several two seaters.

From the summits of the various peaks, the runs offer short steep sections followed by long flat run-outs back to the lifts. Unless directly from the peak summits, the runs classified as blue intermediate tend to be overrated and may feel more like flat green runs. If the short steeps from the peak summits aren't enough for you, there are numerous hikeable double-black diamond runs further up, especially off the summits of Peak 8 and Peak 6.

Of the hikeable terrain, the most challenging chute is the ESP run located at the far end of Serenity Bowl off Peak 6 with a 45 degree slope entry. If you're into the hikeable terrain, keep in mind that it doesn't take much snow, wind or fog to close the double-black diamond terrain -- much of it is in avalanche terrain that is closely controlled. You'll probably need a blue-bird day for that terrain to open up. If they open up, there are three backcountry access gates within the resort.

On the snowy or windy days when the tops don't open, there are several gladed runs that could be interesting. The best of the bunch are Mustang / Blackhawk off Peak 10 and Windows off Peak 9. Avoid the newer Wanderlust glade off Peak 7 -- its very flat.

If you're into park shredding, then you've come to the right place. Many consider Breckenridge Ski Area to have the best terrain parks in the US. There are four main park, with the best being Freeway, with its pro-level jumps, and Park Lane, with cool features and plenty of jibs.

For apres ski, try The Maggie, T-Bar, Salt Creek Saloon, Motherload, Angels Hollow or RUM Tavern. Looking for nightlife? Check out Blue Stag Saloon, Cecillias, Sherpas and Yeti's, Ullrs or Liquid Lounge. If you happen to be planning a trip for early January, make sure to check out the Ullr-Festival.

The town center of Breckenridge has more charm that most of the Front Range ski areas. The surrounding region and bases areas have been heavily built up and may seem quite crowded at times, including during the week. You'll find many parking areas full by 10am even during weekdays. If it happens to have snowed in the days prior to arriving, you may find plenty of standing snow on the roads and sidewalks -- the town doesn't seem to agressively clear the roads or walkways.

To reach the snowboarding at Breckenridge ski resort from Denver, head west on US70 to Exit #203 for Frisco. Head south on US9 up to the ski area. It's about 2.5 hours from Denver. The small town of Breckenridge is known for its historic mining district that has been renovated with several familiar franchises. 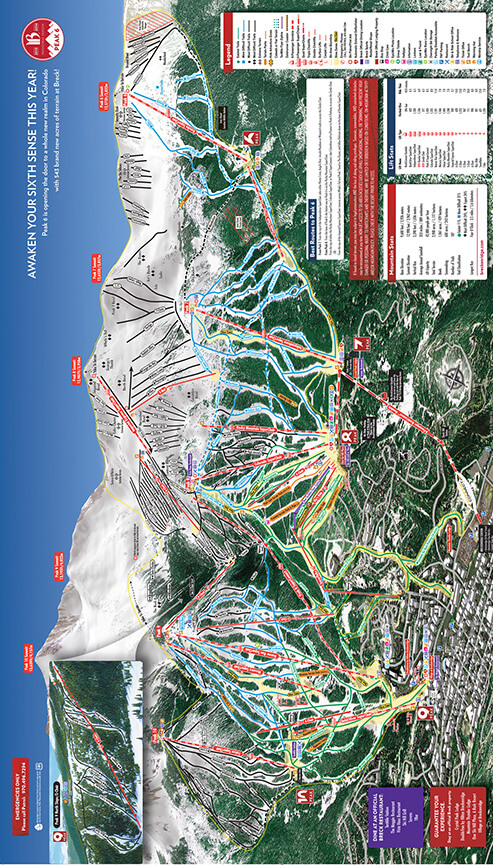