The MOST popular snowboarding destination in Quebec.

Northwest of Montreal, the Mont Tremblant Ski Resort is the largest ski area in eastern Canada. It sits on the highest peak in the Laurentain range, the oldest mountains in North America. The ski area has 102 runs totalling 82km over 755 acres served by 11 lifts with a maximum vertical of 644m. The ski area is divided into the North Side (better in morning) and South Side (better for afternoon). Mont Tremblant is not really known as a beginners mountain. About 50% of the runs are advanced and about 32% are intermediate. The best snowboarding at the Mont Tremblant ski area can typically be found during the months of January to March.

The ski area is not well-known to snowboarders but it is well-known for its glades. Matter of fact, they recently added five new gladed regions on the Northside and the Edge totalling 50 acres. So make sure to explore them, especially the double-black diamond Emotion. Keep in mind that you are really on your own when off the groomed runs so be prepared. The glades (aka woods) are very tight and generally not trimmed. It takes a lot of fresh snow to make the woods enjoyable, or even open for that matter. You really do not want to venture down the glades if there is no fresh snow since they will most likely be icy or even closed.

This ski area really needs at least a reported 40 inch base to be worth checking out. Even with 40 inches, there will be bare spots and many exposed ice sections.

Note: Before coming up to this ski area, make sure you are watching trail reports and weather reports for several weeks prior. The more challening runs will be closed if there is not enough snow or it is too icy. Watch the weather reports for warm weather or rain, which could lead to trail closures on cold days.

For most of the winter season, there is not much of an apres ski scene partially due to the cold temperatures and lack of outdoor bars. But, Tremblant is known for its springtime apres party scene. If you are looking for apres ski, try Le Diable microbrewery or Le Ptit Caribou which is down in the middle of the base village away from the slopes. It seems to be the only place to find anyone celebrating the days runs. For an authentic dinner, scope out the Le Savoie for fondue. For nightlife, you can check out the Bar Epoque (around the corner from Caribou).

Tip: Mont Tremblant Ski Resort is very crowded on the weekends -- you may want to come only on the weekdays. The best snow is typically in January or early February, but expect it to be really, really cold. Colder than most people have ever been on the slopes. You may not want to hang around the immediate base area for too long -- there are vulture like so-called Intrawest ambassadors who will try to sell you real-estate. Do check in the First Tracks program that gets you on the lifts an hour early -- it is available through many of the base area hotels.

To reach Mont Tremblant from Montreal, head north on Highway 15 to Sainte-Agathe. After Sainte-Agathe, Highway 15 North becomes Route 117. Continue north on Route 117 to Exit #119 (Montee Ryan) after Saint-Jovite. Head east on Montee Ryan for 3km to the rotary. Continue east out the opposite side of the rotary for another 2km to the base area. It should take about 2.5 hours.

Overall, Mont Tremblant Ski Resort is the 1st most popular snowboard & freeride destination of all 24 snowboarding resorts in Quebec. 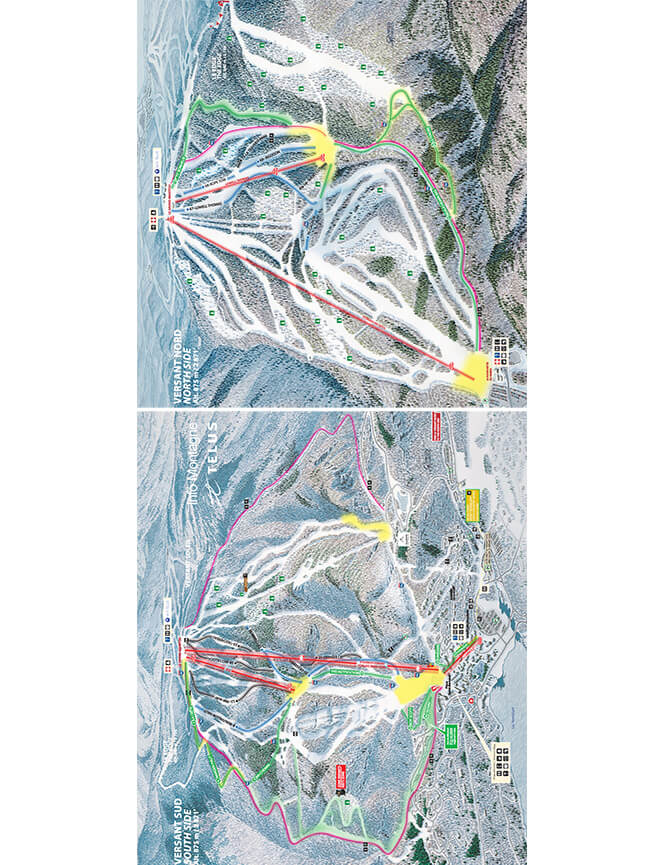