The 4th most popular snowboarding destination in Colorado.

In the San Juan Mountains of southwestern Colorado, the Telluride ski resort has 127 runs spread over 2,000+ acres served by 14 lifts accessing a maximum vertical descent of 4,425 feet. The area offers untracked and groomed trails, open bowls and narrow chutes, as well as plunges and glades.

Telluride is a remote outpost town located high in the mystical San Juans. Home to the Ute Indians, it's also home to brilliant blue skies, clear rivers and diverse wildlife. Majestic peaks form a narrow box canyon that cradles this old mining town filled with great local culture. Founded in the late 1800's, the town has been restored to its historic beauty. The small 8 by 12 block town is peppered with colorful Victorian homes and clapboard storefronts. And most importantly, the locals are down-to-earth artists and athletes who visited for a weekend a decade ago and stayed for the natural beauty and camaraderie.

Okay, enough fluff. Down to the boarding. Telluride is a mix of cruisers, steeps and glades that meet everyone's shredding desires. It's spread out over 2,000 acres serviced by 14 lifts. Get it? There's no lift lines. However, the layout makes for lots of traversing, which takes awhile to get used to, and for short runs with a typical vertical drop of less than 1,500 feet. If big vertical is your bag, you'll need to combine two slow lifts, like #8 and #9 for 3,100 feet. But it's an awesome run down Bushwacker or the infamous Plunge. If you're not into vertical, the Air Garden Terrain Park is the largest in the southwest with 8 acres of berms, banks, rails and pipes, and that is just one of three terrain parks.

If it's been awhile since you've been to Telluride, get ready for some big changes. Previously, the popular Gold Hill's extreme double black diamond runs were only accessible by hiking. Now, expert boarders can quickly shred the steeps, glades, open bowls and chutes of natural avalanche paths like Andy's Gold, Little Rose and Dynamo. Make sure to try Delta Bowl to Eagles Nest.

Off the Prospect Bowl lift are easy and intermediate cruisers for the most part. The exceptions are a few short hikable double-black diamond runs east of the lift, such as La Rosa and Crystal, and west, such as the 30 minute hike up Bald Mountain for vistas of Mount Wilson and then drop into Jackpot powder stash. For some big mountain freeriding from the top of the Prospect Express Lift, head left to the east and start boot-packing up Palmyra Peak. While you'll be tempted to drop left into Black Iron Bowl, keep hiking up for about 2 hours to the Palmyra summit (13,320 feet). After catching your breath, drop into the narrow couloir called Seniors, which descends steeply at 52 degrees.

After a long morning of snowboarding, try checking out the newer Alpino Vino Hut near the top of the new Revelation Bowl. Great food and scenery, but a little on the pricey side.

For the backcountry hounds, off the top of both new Prospect Bowl lifts are new backcountry access gates for experts only experienced with appropriate backcountry rescue gear. From Prospect Lift, you can heading out into Black Iron Bowl with it's steep chutes and open glades descending 1,000 feet of vertical.

After shredding up all the in-bound terrain, Telluride ski area provides access to plenty of hike-to freeriding spread across four areas. The Bald Mountain freeriding is accessible via the access gate on the Upper Galloping Goose from the Lift 12 area (25 minute hike). The Black Iron Bowl freeriding is accessible from Lift 12 and a short hike out Prospect Ridge then descent 1,000 feet of vertical down the expansive Mountain Quail Couloir (up to 30 minutes of hiking). The Gold Hill Chutes off the back of Revelation Bowl is best accessed from the top of the Revelation Bowl Lift and then head down the expert-only chutes while traversing right back to Andy's Gold. Lastly, the new north-face of Palmyra Peak freeriding is located east of Black Iron Bowl and offers 200 acres of hike-to terrain for a 2,000 foot vertical descent.

Another option, if open, is the uncontrolled terrain of Bear Creek, which is accessed via a 10 minute hike from the top of the Gold Hill Express.?To reach the snowboarding in Telluride by air, you will need to fly into Montrose Airport (MTJ) which is located about 65 miles to the north. From the airport, it is a 1.5 hour drive to the ski area.

Overall, Telluride Ski Resort is the 4th most popular snowboard & freeride destination of all 28 snowboarding resorts in Colorado. 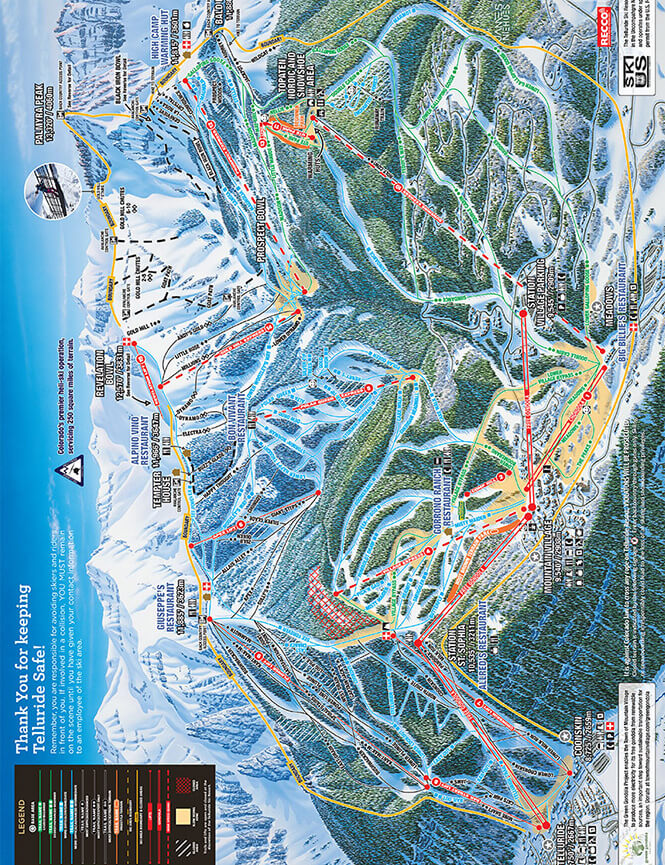