The 3rd most popular snowboarding destination in France.

Southeast of Albertville and Bourg Ste Maurice, the Tignes ski domaine has 150km of pistes served by 47 lifts with a maximum vertical descent of 1,890m. It is part of the Espace Killy ski region that interconnects Tignes with Val d'Isere. The Espace Killy ski region has a combined 250km of pistes served by 79 lifts. Overall, the region is well known for great snow reliability. Tignes is known as the quieter side of Espace Killy, though the villages are very ugly purpose-built resorts with massive high-rise apartment buildings. The more charming village in the lift system is Tignes Brevieres.

If you are heading out on a limited-visibility day, keep in mind that within the controlled ski domaine there are numerous terrain traps/sinkholes just off-piste. These could be very confusing and dangerous if you rode down into one with limited visibility to figure your way back up out. Similarly, when snowboarding at Tignes, you'll want to keep an eye out up high for the glacial crevasses, which may or may not be signed.

For warmup run, try the 10km route from the top of L'Aiguille Percee down to Tignes Brevieres. When you are looking for some challenge, the Sache piste is a remote black run with 1,200m of vertical descent. Like the rest of the black level pistes, it most likely will not be groomed but it is still avalanche controlled. Some of the easier freeriding can be found at Toviere. Then head over to the Naturide Zone called Le Spot, which is an ungroomed, avalanched controlled freeride area. For big powder, snowboarders will want to check out Chardonnet Bowl.

Many snowboarders consider Tignes to be a mecca for off-piste freeriding. You'll definitely want to go with an experienced guide and avalanche gear. A good place to start is the Lognan area between the pistes leading down to Val Claret and down to Le Lac. A more challenging off-piste route is the remote Petite Balme heading down north facing slopes. On the high end, you can start hiking from the top of the Merles chair lift for about 30 minutes to the Charddonnet couloirs where you'll usually find excellent snow.

The most popular off-piste route is the Vallons de la Sache which descends 1,200m into a scenic National Park. This route starts at Aiguille Percee and finishes in Les Brevieres below the Tignes dam.

If you are looking to go big, Tignes is also well known with freestyle snowboarders for its world class terrain parks. The main terrain park is accessed via the Gratialu lift. It has jibs and kickers followed by a full-size halfpipe. The beginner park is Gliss Park, which is served by the Millonex draglift. The big jumps are located the the Val Park which are accessed via Aeroski, and you'll find 8-15m jumps along with some technical rails.

And, after a long morning of rippin' it up, grab lunch at the on-mountain hut Lo Soli at the top of the Chau Dannes lift and Panoramic.

When it comes to apres ski action, don't expect too much, but still check out Scotty's, Grizzleys, Drop Zone or the Blue Girl. For some nightlife in Tignes, you can try the Loop Bar.

To reach the snowboarding at Tignes by air, fly into Lyon. Take the train to Bourg St Maurice and use the hourly bus to Tignes via Altibus. Keep in mind that Tignes isn't well known for its old world charm and is more of a modern purpose built resort.

TIP: If you are planning to arrive by train, keep in mind that the regular bus up to the resort is primarily during daylight hours. After dark, the bus runs infrequently, if at all. Therefore, you will need to take a cab from the train station to the resort. If you plan to fly into Lyon, you may want to check the train schedule before buying your flight to make sure there is a convenient transfer. If you plan to arrive Friday through Sunday, the shuttle Altibus might be a more convenient option. Since there are not many trains or buses up into this region, you are highly encouraged to advance purchase tickets and reserve your seat. 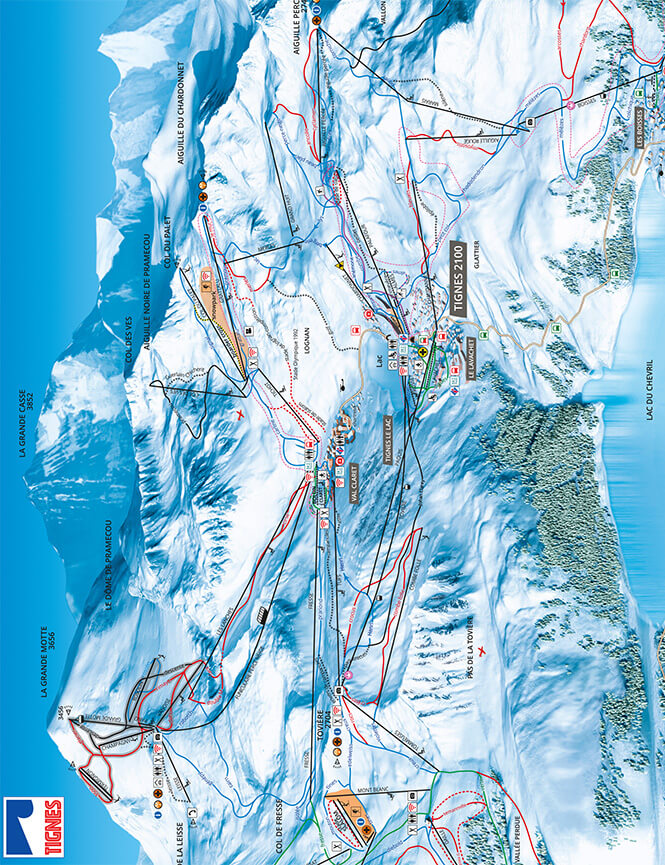