The 7th most popular snowboarding destination in New Hampshire.

North of Conway near Pinkham Notch, the Wildcat Mountain ski area has 47 trails served by 4 lifts spread over 225 acres with a max vertical drop of 2,100 feet. Situated in the shadow of Mt Washington, the ski area receives an average annual snowfall of over 200 inches, which is the most in New Hampshire. From this cold and windy mountain, there are great Mt Washington vistas. The level of difficult of the runs is spread from 25% beginner to 45% intermediate and 30% advanced. For a long starter ride, try the 2.75 mile Polecat Run.

If you can not find enough challenge in bounds, try the nearby Tuckerman Ravine for some backcountry extreme adventure. The best Wildcat Mountain snowboarding can be found during the months of January and February.

After a day of snowboarding at Wildcat, the only option for apres ski are the base area is The Pub in the base lodge. Alternately, on the way back to North Conway, you can try Tuckermans Pub in Intervale and Red Parka Pub in Bartlett. For nightlife, try Scarecrow Pub in Intervale, Wildcat Tavern in Jackson or Shannon Door.

Wildcat Mountain is located on Route 16, halfway between the towns of Jackson and Gorham, in Pinkham Notch. To reach the snowboarding at Wildcat Mountain Ski Area from Boston, head north on US95 to Portsmouth, bearing left to White Mountains on Spaulding Turnpike which becomes Route 16. On crowded days or powder days, try using the C parking lot. Keep in mind there are no base area accomodations, so you may need to stay in Jackson or North Conway. The nearest airports are Manchester, Portland and Boston.Pending approval, Vail Resorts has announced the purchase of Wildcat Mountain, thus allowing lift access via the popular Vail Epic season pass.

Overall, Wildcat Mountain Ski Area is the 7th most popular snowboard & freeride destination of all 19 snowboarding resorts in New Hampshire. 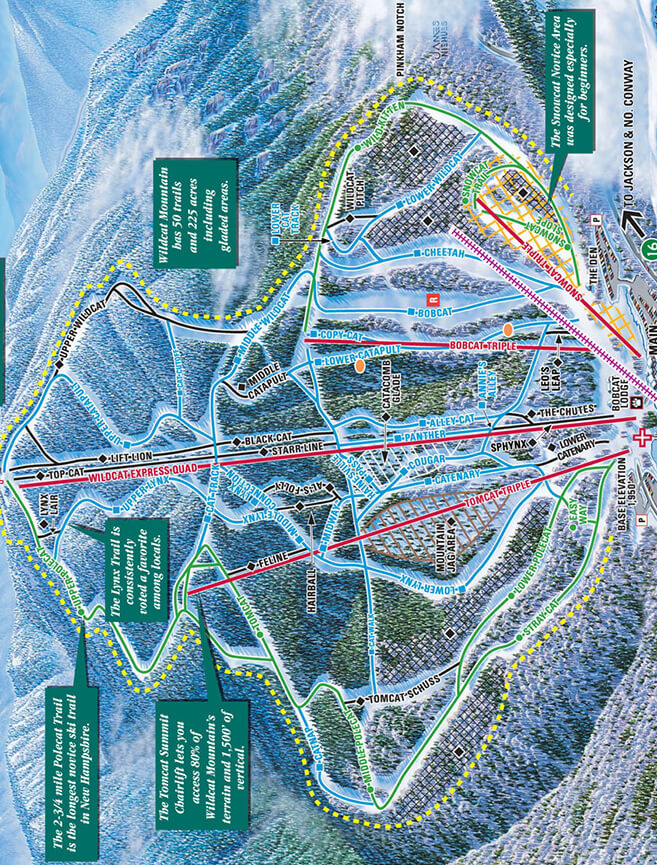