The MOST popular snowboarding destination in Switzerland.

Southwest of Zurich and Birg, the car-free town of Zermatt is the snowboarding base for the infamous Matterhorn Ski Paradise. This well-known and very popular ski area combines several interconnected mountains and even provides access over Kleine Matterhorn to a pair of Italian ski areas.

Zermatt is the perfect base for exploring the Matterhorn Ski Paradise and is surrounded by 30+ mountains over 4,000m. This charming Swiss village at 1,620m elevation hosts over 2 million visitors each year, and very few of the tourists are from English-speaking countries (<5% US and <10% UK). While you may encounter very few Americans or English, everyone here seems to know a little. But it is still recommended to know some German as well. The area is a mix of cultures with much French and Italian influence. You may start a conversation with a German greeting of guten tag, then hear some French, and then end with an Italian ciao.

The Matterhorn Ski Paradise is truly an epic destination for freeriding snowboarders, especially if you are looking for 1,000m descents on ungroomed pistes on and off marked runs. Just looking around, you will see countless, untracked, above-treeline alpine bowls waiting for you to explore. And, there are plenty of maintained runs along panoramic ridges leading deep down into the glacial valleys below. Most of the skiers tend to say within the marked, groomed runs. The few snowboarders that do come here tend to be a little more adventurous and willing to deal with the numerous traverses needed to get in and out of the ungroomed runs.

It is important to keep in mind that there are plenty of glaciers, cliff, rocks and avalanche zones within these ski areas. Therefore, unless you really know where you are going, you should stick to the marked, groomed pistes. When off-piste, the hazards such as glacial crevasses, rock faces and rocks will most likely not be marked and are extremely hazardous. If you really want to go off-piste, there are many local guides who will gladly share with you their favorite runs and this is highly recommended. It is also highly recommended to always have appropriate avalanche gear (beacon, probe, shovel, first aid) and always travel in a similarly equipped group. You can hire a Swiss mountain guide at the Alpin Center for tour of Schwaztor (black gate) across glacier covered with deep pow and seracs. That tour finishes with a narrow ice canyon and an ice cave. Or, Air Zermatt provides helicopter access to several peaks, including Monte Rosa (4,250m), Alphubeljoch (3,782m) and Plateau Rosa (3,479m).

Above Zermatt, there are nine marked off-piste ski routes to explore. While they are usually closed right after fresh snowfall, they still aren't avalanche controlled so use care. From the Schwarzsee, look for piste #58, #59 and #60. From the top of Hohtalli, try out piste #31, #32 and #33. From the Rothorn, the two ski routes include piste #16 and #17. Lastly, from Blauherd, there is ski route piste #10 that is left ungroomed. These are all big runs with big vertical.

The Matterhorn Ski Paradise is made up of several interconnected mountains and lift systems accessible from one lift pass. These areas include the following from northeast to southwest: Rothorn Paradise, Sunnegga Paradise, Gornergrat, Riffelberg, Schwarzsee Paradise, Matterhorn Glacier Paradise, Cervinia (Italy), and Valtournenche (Italy). From Zermatt, you will need to take a gondola or train up to one of three starting points: Sunnegga Paradise, Riffellberg or Furi (just below Schwarzsee Paradise). You will need to pass through one of these to get up to the higher lifts and pistes. Matter of fact, there are limited runs down from these points. Most people end up taking a gondola or train back down the mountain from these points at the end of the day to avoid long, flat traverses and walks back into town.

With that said, you will most likely not have 2,200m vertical laps all day long (or ever). Although the elevation difference between the uppermost summit and town is 2,200m, it is typically not practical to make runs of this vertical due to closed runs, flat traverses or long walks back to the base lifts or town. For example, if it has been snowing, Piste #62 and Piste #62 at the bottom of the Matterhorn Glacier Paradise area will most likely be closed due to avalanche concerns thus preventing a top to bottom run.

Matterhorn Ski Paradise is also interconnected with the Italian ski resorts of Cervinia and Valtournenche. If you feel like checking out the Italian slopes, just take the gondola to Furi and then take the cable car to Trockener Steg. From there, you used to take another cable car up to Klein Matterhorn (3,883m). Now, there is a 3S cableway with 25 gondolas from Trockener Steg station to Klein Matterhorn, which is much more reliable across a wider range of weather conditions. From up there at the Matterhorn Glacier Paradise, it is possible with a little traversing down over Plateau Rosa to descend all the way down into Valtournenche (1,524m) or 11.5km down into Breuil-Cervinia (2,050m). Getting back up is another matter, especially from Valtournenche, from here you will need to no less than six lifts to get back up to Plateau Rosa in order to get over to Zermatt. While up on Plateau Rosa near Theodul Pass, check out cafe Bontadini for an espresso.

The Matterhorn Ski Paradise is also known for having the longest ski run in Switzerland at 20.4km. You will only want to attempt this if you are ready for a lot of flat traverses to walk. There is also the Matterhorn Ski Safari which is a designated route linking most of the lifts to provide 10,000m of vertical in a day if you want to make it all the way to Cervinia or 12,500m of vertical if you want to go to Valtournenche. There is a separate mountain map that shows the combination of runs and lifts to follow this safari.

If you are looking for a family-friendly zone, the Rothorn Paradise, Sunnegga Paradise and Riffelberg areas tend to attract more families and beginners. For families heading higher up, the Gravity Terrain Park is located up on the Theodul Glacier at 3,000m. For an advanced intermediate piste with exceptional Matterhorn views and a sense of remoteness, look for piste #69 or #70 that lead down to Schwarzsee.

When you are ready for lunch, there are several great places on the mountain to enjoy. Three of the better high up restaurants include Restaurant Riffelberg, Bergrestaurant Edelweiss and Vis-a-vis at Gorner Grat. Also, make sure not to miss heading down to the quaint village of Findeln (just south of Sunnegga Paradise) and visit the Findlerhof. It offers amazing views and the menu has all the Swiss classics. If you can move after lunch, head back up to the famous moguls at the Triftji glacier on the eastern side of the Matterhorn Ski Paradise.

The apres ski scene usually depends upon where you are coming down or where you are staying. For apres ski, try the Papperla Pub, Olympia Stubli near Sunnegga, Zum See near Furi, or Simi near SimiMax. If you are still not satisfied, then check out Elsies, Postli, or Hennu Stall. Keep in mind that apres ski is pretty mellow on Sunday evenings as there is usually no live music. Speaking of music, this is a pretty low-quality affair.

For dinner, try Whymper Stube or Schwyzer Stubli (traditional). If you are looking an amusing dinner, make sure to head over to Chez Heini, which is kind of a cult favorite due to its madcap decor and live entertainment from the chef.

For some nightlife, try the Pink Elephant, Grampis, Papperla Pub (younger crowd), Old Zermatt (older crowd), Elsies Bar, Panorama Bar on top of Nicoletta Hotel or Le Broken. After midnight, make sure to take in the dancing at Schneewittchen which is next to Papperla Pub at Bahnhofstrasse.

In light of the avalanche hazards, the Zermatt Ski Paradise ski safety staff takes snow safety very seriously here. As they should with the huge peaks and big snowfall you will find here. Therefore, with any significant snowfall, you find that the steeper, more challenging pistes and related lifts will be closed. If you find a lift or piste that is not open at the start of the day, it will most likely not be open that day. Moreover, if there has been serious snow overnight, you can forget about going over to Italy. The final tram up is usually closed, as are the high lifts of Cervinia leading back up to the Plateau Rosa. And, with snow overnight, plan the start of your day carefully since Piste #62 coming down from Matterhorn Glacier Paradise will probably be closed, as well as the Stockhorn / Triftti area. So, if you arrive in snowy period and want to get over to Italy at some point, make sure to go as soon as possible, like on your first day.

Since most people coming to Zermatt arrive on Saturday and depart on Saturday, the slopes are empty on Saturdays. So, if you want first tracks and to have the place to yourself, it is highly recommended to arrive and depart such that you can be up on the mountain on Saturdays. Also, keep in mind that the lifts do not come into the village. Therefore, you really need to pick the location of your hotel carefully to be either close to the town center or close to your preferred lift.

To reach the Zermatt snowboarding by train, plan to take one of the many international connections to Birg or Visp, which is south of Zurich or southeast of Bern. From Birg or Visp, transfer to the narrow-gauge Matterhorn Gotthard railway, which only leads to Zermatt. From the Zermatt Bahnhof, there are plenty of electric taxis or horse-drawn carriages to assist you to your final destination.

To reach Zermatt by car, you will need to keep in mind that Zermatt is car-free. The closest parking is in the town of Tasch, which is 5km from Zermatt. The major roads in southern Switzerland and the Lotschberg Tunnel from the north all lead to the town of Visp. You may want to park in Visp and take the train into Zermatt. Otherwise, you can drive south from Visp to Tasch to park. From Visp or Tasch, take the narrow-gauge Matterhorn Gotthard railway, which only leads to Zermatt. From the Zermatt Bahnhof, there are plenty of electric taxis or horse-drawn carriages to assist you to your final destination. Note: there are 2,900 covered parking spaces in Tasch.

PRO TIP: If you are staying in Zermatt for a week, you may want to consider taking the train back down valley to pickup the bus up to Saas-Fee ski area, which is also exceptional. In addition, keep an eye out for the new proposed lifts coming above Zermatt. First, there is a proposed new tram from Hohtalli up to Stockhorn. Second, there is a proposed new gondola from Tuftern up to Rothorn. Both of these will provide more access to extreme terrain. 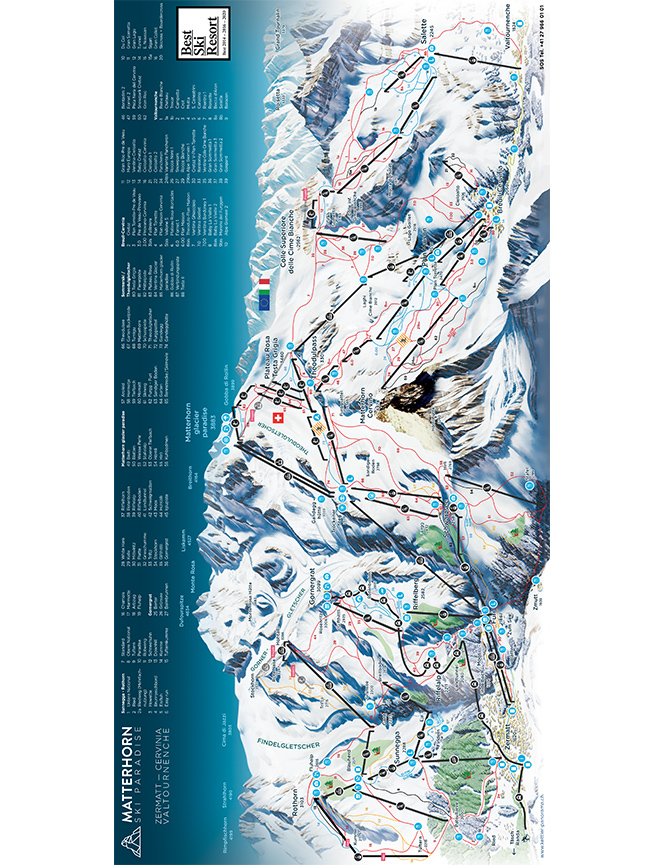