The MOST popular snowboarding destination in Austria.

West of Innsbruck, the St Anton ski area is a vast freeriding mecca with extensive off-piste sidecountry country and backcountry to explore. And, when you rip it up hard, you can expect the apres ski action to be just as big -- this ski area has the biggest apres ski scene in the world. St Anton has 71 pistes spread over 5,400 acres that are served by 46 lifts with a maximum vertical descent of 1,350m. The St Anton am Arlberg ski area is known for reliable snow (7m average annually), though it may be icy at times. There are plenty of above treeline pistes and bowls to explore, along with on-piste mogul field descents. The village of Sankt Anton am Arlberg is a charming, pedestrian Tirolean village, which makes a great base for a week or more!

St. Anton am Arlberg is part of the larger Ski Arlberg region that interconnects by lifts/buses several resort areas including St. Anton, Lech/Zurs, Warth/Schrocken and Sonnenkopf forming the fifth largest ski region in the world. Overall, there are 340km of groomed pistes spread across 12,000 acres that served by 85 lifts with a maximum vertical descent of 1,700m. If you haven't been to the Ski Arlberg region for a few years, you may not be familiar with Warth/Schrocken. In the winter 2013/2014 season, the 2km Auenfeldjet gondola opened that connects Lech with Warth via the Weibermahd lift top station in Lech to the Geissbuhel Alpe above Warth. This new heated 10 seat gondola follows an old power line route (now buried across the Auenfeld Pass). The other main change in the past couple years is the new Flexenbahn ski lift connecting Stueben to Zurs - no more Post Bus ride! The other village in the Ski Arlberg region, Sonnenkopf, is accessed only by the free ski-bus from Stuben to Klosterle. If you are up to the challenge, follow the Run-Of-Fame Runde to lap all of the Arlberg connected villages. Just start as soon as the lifts start spinning in the morning. And, try not to linger too long at any hutte - the morning outbound half of the loop is quicker with freshly groomed pistes than the reutrn route on icy, skied-off slopes.

While St Anton is known for its famous ski/snowboard school and beginner ski slope, for the most part this ski region is not a place for beginners. Solid intermediate riders or better will really enjoy exploring the wide range of slopes and destinations. There are plenty of traverses between lifts, so be ready to skate or hike often. Plus, many of the more remote lifts tend to be t-bars or rope tows, which are not well marked on the piste maps. Even some of the chairlifts can be challenging for the uninitiated rider with a tricky magic-carpet like access on the final 10 feet to the actual chair seat. Don't expect the lift ops to help you when you fall since there aren't many of them working. As a special note, when you need to take a bus between villages, the buses at lift opening and lift closing are pretty jammed. Most skiers shove their gear roughly on the back of the bus, but snowboarders can put your snowboard underneath the bus in the luggage compartment to protect it from the frenzy.

Above St Anton, the pistes directly connect St Anton with St Christoph and Stuben. The longest run above St Anton is about 10km. For glades and powder, try heading across the road the Rendl ski area (south of St Anton) via lifts Riffl 1 or Riffl 2 for a 8km long bowl leading back to town. The Hinteres Rendl route is worth trying if you are up to it and have the right gear. Rendl tends to be alittle more friendly to snowboarders. Another gladed area to explore is the Langen forest accessed by the Albonagrat ski lift above Stueben. Oddly, with the addition of the Flexenbahn lift from above Stueben over to Zurs, its seems like the crowds are now bypassing Stueben altogether. They also decommissioned the high lift directly above Stueben making it much more difficult to get to the pistes on the plateau above town, so it's become quite quiet over there.

St Anton am Arlberg is not shy about spending money on new lifts. It seems like each season offers the launch of a new or replaced lift system. For the Winter 2019/2020 season, there is the new Schindlergratbahn gondola, which replace the old chairlift and also now connects on to the summit station of the t-bar coming out of the valley off the Vallugabahn summit. That is a great addition. Now, everyone is just waiting for the lift discussed that would provide connection southeast over towards the Silvretta!

On the main mountain, you will find that the powder lines get tracked out surprising quick, especially compared to other Austria ski areas. Some of the best lines can be found on the north side of Albonagrat, such as the Maroikopf-Langen route. Also ski route 18 down to Alpe Rauz under the Valgefahr chair can be interested. Also from the Valgefahr chair, check out the challenging Pfannenkopfe off-piste route. For all the off-piste lines, a 2m base of stow is definitely needed to cover the rocks and make the routes reasonably safe.

With a guide, you can head up the Valluga Summit via the tiny Vallugabahn II tram and follow the off-piste backcountry route down to Zurs (you'll need a bus back). Also from the Valluga Summit, a guide can lead you to the best untracked powder in the Arlberg, For guides, talk to the Powder Club Off Piste Guiding through the Skischule Arlberg at 43-5446-3411.

While St Anton am Arlberg is not really known for its freestyle scene, there is a small terrain park located up at the mid-station of the Rendl area located south of town. And, if you haven't been to St Anton in a few years, there's now a new lift located on the west end of town that goes south across the highway and railroad up to Rendl - no more long trek to get over to the Rendl lift.

After a long morning of shredding, have an on-mountain lunch at the top of the Arlenmahder lift at the Ulmer Hutte, or find the Hospizalm. Plus, make sure to ride over to the village of Stuben to have lunch at Berghaus Stueben.

Long known for its apres ski scene, St Anton still offers the best apres ski in the Alps. Noone else is even close. But, while its the last bastion of apres ski, its barely hanging on. Most of the real apres action is up on the slopes well above the Galzigbahn base station. But, there have been a few changes over the years. Sadly, the old favorite Krazy Kanguruh has expanded greatly but the growth has adversely changed the vibe. As the Kangaruh has gone upscale, it's no longer the center of the rowdy action with techno and shot pouring waitresses walking on the tables. It's a much more family-oriented affair and feels like a TGIFridays. The epicenter has firmly moved downslope to the Mooserwirt where you'll still find dancing on the long tables outside, bar staff carrying trays of dozens of half-liter beers, and loud techno playing over the packed dance floor inside. Good luck snowboarding the final 200m vertical down to the base in the dark. If you make it, stop by the BaseCamp where the action continues.

Similarly, the nightlife scene has changed as well. Some of these changes are the result regulations prohibiting ski boots in town past 8pm. So, it seems like instead of just partying from apres ski straight into dance clubs, there seems to be a break in the action around 8pm now. The lower apres ski bars are now sedated after 8pm. The old favorites of Kandahar, Piccadilly and Post Keller are all gone. Your best bets are the newer Murrmel, the Underground Pub or the laid back locals joint called Platz l. St. Anton is known to attract very hard partying Scandinavians and English who catch first chair and party til 2am. You'll most-likely encounter plenty of shredders that party from 3pm-3am and are still out for first chair in the morning. Crazy!

For some local dining between apres and clubbing, try checking out the Fuhrmannstube in St. Anton and also the authentic Alt St. Anton in Nasserein (make a reservation).

To reach the snowboarding at Sankt Anton am Arlberg by air, most international travelers will fly into Zurich. From the Zurich Airport, many travelers will use the Arlberg Express ski bus (3 hours) which runs Friday, Saturday and Sunday (0043-05582-226). Alternately, you can fly into Innsbruck, which has many connections from within Europe. There is a regular bus to the main train station where you can catch a train up to St Anton. It's a two hour drive from Innsbruck. Note: a seven-night stay (Saturday arrival) is typically required at most hotels, but luckily the six-day Arlberg region lift pass is not expensive. Typically, February and early March are peak season with tons of Europeans on vacation. 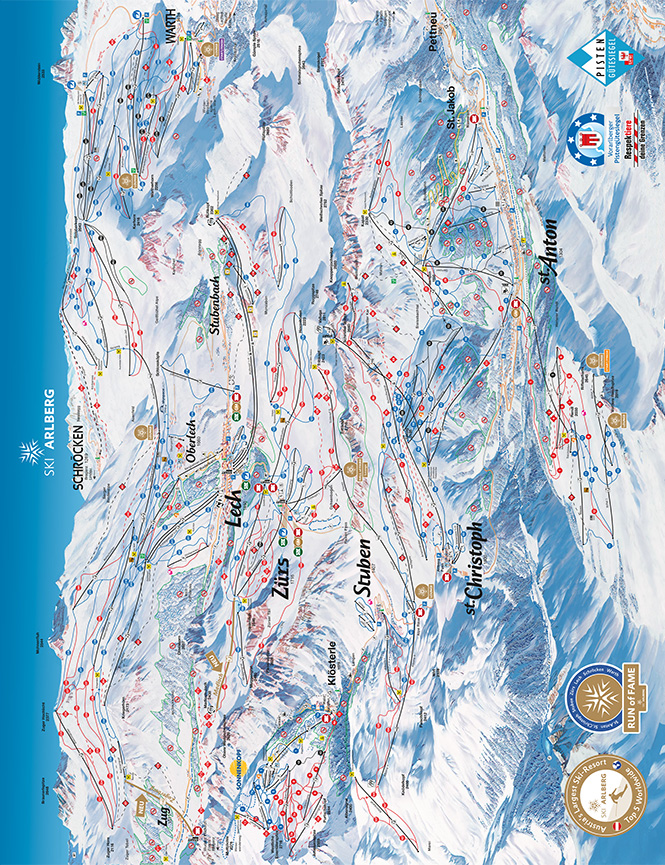