The 7th most popular snowboarding destination in Italy.

On the southside of Bormio, the Bormio Ski 3000 ski area is popular with local snowboarders. Also known as Vallecetta or Cima Bianca, it has 14 pistes totaling 63km that are served by 11 lifts accessing a maximum descent of 1775m. Although there is big vertical possible, just like the other local ski areas, most snowboarders spend the day lapping the top half of the mountain. The ski area has an unusually tall and skinny profile that is well suited for intermediate snowboarders. Make sure to watch out for "skiwegs/sciisticos" which are not maintained and have avalanche risk.

For hardcore snowboarders, there is good off-piste side-country on the upper part of the mountain above the treeline. Definitely check out the big steep Vallone bowl. For more extreme backcountry terrain, hike to Mount Vallecetia for long remote lines.

For the freestyle snowboarders in your crew, Bormio Ski 3000 has a terrain park called Snowpark Bormio. Located on the Rocca Est zone, it is ideal for intermediate and advanced freestylers with kickers, tabletops, rails and rainbows.

The Bormio Ski 3000 ski area is interconnected by free ski bus (and ski pass) with Santa Caterina ski area (20 min) to the southeast and with Cima Piazzi ski area (15km) to the northwest. It runs infrequently so make sure to check the schedule ahead of time. The best Bormio 3000 snowboarding is during the months of January and February.

The village of Bormio is a historic old village that is known for its charming cobbled, car-free pedestrian zones. It is also known for a lively apres ski scene and nightlife. The best apres ski can be found at either La Rocca or Be White. A good place for a traditional dinner is at La Rasiga.

To reach the snowboarding in Bormio, there is a connection of train and bus from either St Moritz or Milan (via Tirano).

PRO TIP: The Livigono ski area is located to the northwest of Bormio. There is a bus from Bormio to the Trepalle base area of Livigo that takes 40 minutes. The Alta Valtellina ski pass covers Livigno, Bormio Ski 3000, Cima Piazzi and Santa Caterina ski areas. 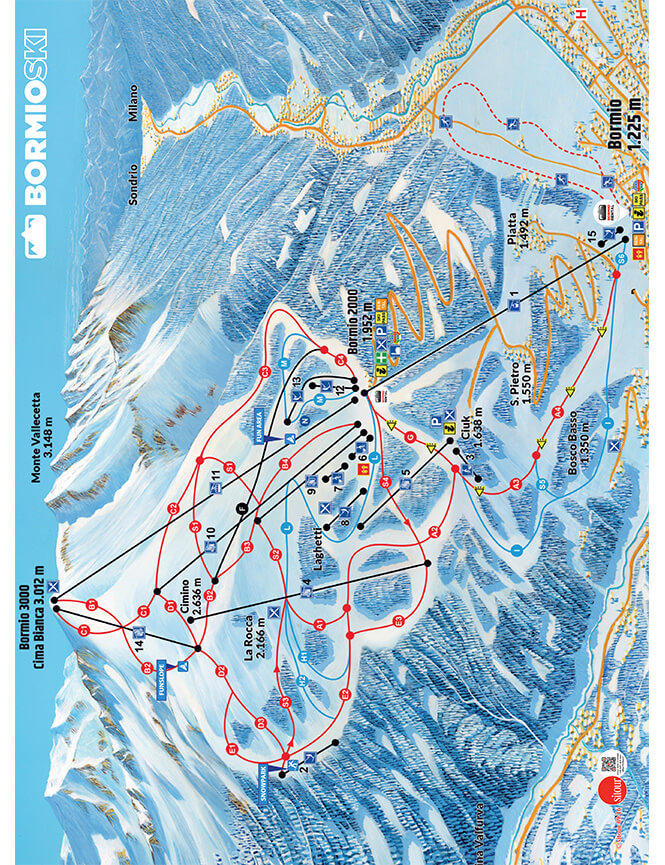