The 2nd most popular snowboarding destination in Austria.

West of Innsbruck and northeast of St Anton, the glitzy Lech / Zurs ski area has 36 lifts with a maximum vertical descent of 1,100m. Lech am Arlberg and Zurs am Arlberg are located in a scenic romantic valley accessible only by road. The village of Lech am Arlberg inparticular is known as a high-end, town catering to an older, sophisticated, upper-crust crowd with plenty of five-star hotels and restaurants. While the village of Zurs am Arlberg may be less expensive, it is mainly a collection of purpose built hotels located on the slopes.

Above the villages, there are plenty of steep, above the treeline powder and mogul fields in addition to the groomed pistes. Just keep in mind that the average annual snowfall is only about 2.5m. Around the valley, the lifts and pistes connect 7 towns: Lech, Zurs, Zug, Oberlech, Stubenlech, Warth and Schrocken. The layout of this ski complex lends itself to exploring 4 of the seven towns in one day by skiing the mountains clockwise (known as the White Ring). Starting in Lech, take the Rufikopf Tram east up to the Rufikopf summit. Head down to the south via Route #38 towards Zurs. When in the Zurs area, make sure to head over to the Trittkopf Tram and explore Route #7 before heading town into town for lunch. After lunch, head west across the road and take the Zursersee Lift and then the Madloch Lift up to Madloch-Joch Summit. Then drop down Route #33 to Zug. Take the Zugerberg Lift up and then loop around to pick up the Steinmahder Lift. At the Zuger Hochlicht summit, follow Route #35 to Route #34 into Oberlech. Hit apres ski here, or continue back down to the base.

If you're up for some off-piste backcountry challenge, there is excellent guided freeriding in the surrounding mountains. Try checking out the routes below Rufikopf such as the Schwarzewand descent, and also from the Trittkopf into Pazieltal or Stueben. Another good route is the Zurs Gams route from the summit of the Muggengrat chairlift, which has a tight, steep top entry but widens as you head down to the tunnel between Zurs and Lech (near bus stop). Make sure to grab a guide first, though.

Lech and Zurs am Arlberg are part of the larger Ski Arlberg region that interconnects by lifts/buses several resort areas including St. Anton, Lech/Zurs, Warth/Schrocken and Sonnenkopf forming the fifth largest ski region in the world. Overall, there are 305km of groomed pistes spread across 12,000 acres that served by 85 lifts with a maximum vertical descent of 1,700m. If you haven't been to the Ski Arlberg region for a few years, you may not be familiar with Warth/Schrocken. The 2km Auenfeldjet gondola opened that connects Lech with Warth via the Weibermahd lift top station in Lech to the Geissbuhel Alpe above Warth. This new heated 10 seat gondola follows an old power line route (now buried across the Auenfeld Pass. The other village in the Ski Arlberg region, Sonnenkopf, is accessed only by the free ski-bus from Stuben to Klosterle.

Solid intermediate riders or better will really enjoy exploring the wide range of slopes and destinations. There are plenty of traverses between lifts, so be ready to skate or hike often. Plus, many of the more remote lifts tend to be t-bars or rope tows, which are not well marked on the piste maps. Even some of the chairlifts can be challenging for the uninitiated rider with a tricky magic-carpet like access on the final 10 feet to the actual chair seat. Don't expect the lift ops to help you when you fall since there aren't many of them working. As a special note, when you need to take a bus between villages, the buses at lift opening and lift closing are pretty jammed. Most skiers shove their gear roughly on the back of the bus, but snowboarders can put your snowboard underneath the bus in the luggage compartment to protect it from the frenzy. After a long morning of shredding the slopes above Lech/Zurs, try checking out the on-mountain lunch at either Rud-Alpe, Kriegeralpe or the Rote Wand in Zug.

When you are ready for some apres-ski action, don't expect the wild huttes of St Anton am Arlberg. It's a much more sedate affair in Lech/Zurs. But, you can check out the S'Pfefferkorndl, the deck at Hotel Montana, the Hotel Krone or the Hotel Tannbergerhof. If you do take a break for dinner, you'll want to head to the Haus No. 8. And, how about some nightlife? Then try the Scotch Club at the Arlberg Hotel or the disco at the Krone after 10pm. The disco at the Hotel Pfefferkorn also gets going after 10pm. Over in Zurs, definitely head to Zurserl and Vernissage.

To reach the snowboarding at Lech am Arlberg by air, most international travelers choose fly into Zurich. From Zurich Airport, you can use the Arlberg Express bus (3 hours) which operates on Friday, Saturday and Sunday (0043-05582-226). Alternately, you can fly into Innsbruck which has many connections from within Europe. There are some smaller shuttle bus charters running up to Lech (2 hours). There is no train service to Lech or Zurs.

Tip: If you are coming from Germany, the new interconnection from Warth to Lech provides a new option. You can drive conveniently right to Warth and stay there inexpensively, while using the new gondola interconnect to explore the Lech/Zurs slopes.

PRO TIP: A seven-night stay (Saturday arrival) is typically required at most hotels, but luckily the six-day Arlberg region lift pass is not expensive. Typically, February and early March are peak season with tons of Europeans on vacation. Also, Lech has heli-skiing options available off either Orgelspitze down to Zug or Mehlsack down to west of Zug with a 25 minute hike back to Zug. 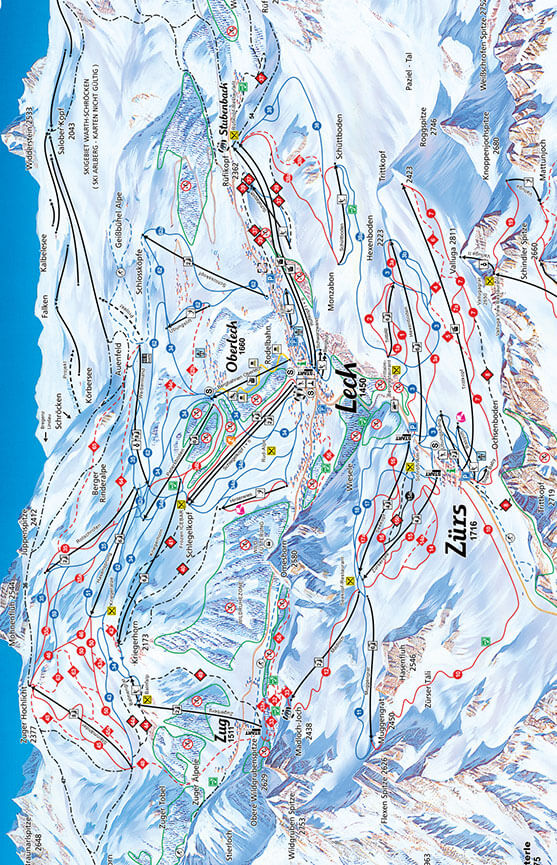