The 5th most popular snowboarding destination in Switzerland.

Southeast of Geneva and Martigny, the Verbier ski area has 56 runs totalling 192km that are served by 37 lifts with a maximum vertical drop of 1,830m. Verbier tends to attract extreme freeriding snowboarders from around the world. There is amazing off-piste freeriding but with so many extreme boarders it gets tracked out pretty quick. Keep in mind that with so many extreme boarders in residence, that they even track out the avalanche zones, so make sure to know what you are doing before following a tracks into sketchy areas since avalanches are common.

Verbier Ski Area is part of Les 4 Vallees ski domain. Located southeast of Martigny, Les 4 Vallees ski domain is one of the largest in Switzerland. Les 4 Valles encompasses 89 lifts serving 91 groomed pistes totalling 410km spread across four massive glaciated valleys. The lifts interconnect Le Chable, Verbier, La Tzoumaz, Nendaz, Siviez, Veysonnaz, Thyon and soon Bruson The pistes are 39% beginner, 44% intermediate and 17% black. In addition to the groomed pistes, there is plenty of ungroomed, marked ski-tour routes and unmarked off-piste terrain to explore under craggy peaks down steep couloirs. Keep in mind that there are plenty of t-bars and Poma platter lifts spread throughout the region, along with flat or rolling traverses between ski areas.

Overall, you are not going to find many snowboarders here, maybe 5-10%, unless it is a powder day. Speaking of powder, if you plan to explore the amazing wealth of rocky off-piste terrain, snow depth can be a problem throughout. If the quoted minimum depth is less than 90cm (36 inches), the off-piste routes are pretty sketchy to explore and you will be stuck on the icy groomed pistes. There can be some inconsistencies in published snow reports, such as centimeters reported as inches, so make sure to check several snow report sources before coming. Freeriders will want to stay in Verbier if you can afford it, otherwise consider Le Chable or Siviez. If you are on a budget, make sure to ask the tourism office about the many bunkhouse options - some are on the mountain and offer first tracks options.

For challenge at Verbier, start with the narrow Creblet above Lac Des Vaux which starts with bumps and then turns into powder. Next, head up the Mont Gele cable car which accesses only off-piste ungroomed runs and couloirs. Then try Attelas couloir, and the gladed Vallon D Arbi on the backside. For a sweet and long off-piste ride, do the short walk from the top of the 104 Funnispace cable car or the Les Attelas lift to a freeride leading down to the 107 Mayentzet lift.

Of course, Mont Fort is the epi-center of challenging snowboarding with only one marked run down but plenty of steep off-piste, off-the-back freeriding options on the Tortin Glacier. Just keep in mind that it takes 5 lifts to get to the summit. From the summit of Mont Fort cable car, hike the high traverse called Stairway-To-Heaven ascending for 15-20 minutes, which leads to several open bowls filled with powder. If the lift-accessed terrain and hikeable routes are still not enough for you, there is helicopter access to three nearby peaks: Petit Combinc (3,672m), Rosa Blanche (3,336m), and Aiguille du Tour (3,540m).

While not many snowboarders come to Verbier for freestyle riding, there are a few terrain park options in Les 4 Vallees. La Chaux terrain park at an elevation of 2260m is located off the Chaux Express lift. The park has a limited range of jumps, rails, jibs and kicker features. The better park is located in the Nendaz sector and is called the WoodPark. The Wood Park is accessible from the Tracouet lifts.

After a long morning of riding, there are several good options for lunch up on the mountain. Try the L'Olympique at the Funispace lift summit, or the Restaurant Col Des Gentianes in the Ruinettes area, the Cabane Mont Fort on the Gentianes to La Chaux piste, or the Chez Danny in the trees below Ruinettes. If you happen to be at the La Tzoumaz base for lunch, try the restaurant in the Hotel Poste.

If you are looking for apres ski action, keep in mind that there are not any bars right at the main Medran base in Verbier. Most of the action is further down the Medran strip, except for Bar 1936 which is up on the mountain. Subsequently, apres ski tends to start a little late, such as about 5pm. Many apres skiers even head home to change first. If its sunny out, start at the outdoor tables at Big Ben, otherwise, head inside at the Offshore cafe. Then move down the street to Fer A Cheval, and finally hit Farinet Apres Ski Bar. If you happen to base out at Le Carrefour at the end of the day, try the Wax Bar.

Verbier is known for its nightlife and party scene, but plan to pay to play -- it is quite expensive here. Try Loft Bar, Le Pub Mont-Fort, Casbah and then head to Tartata (call ahead to reserve a table near the dance floor). Or try the upscale Farm Club pub or Twin Peaks.

Most snowboarders do stay up in the village of Verbier, though it can be quite pricey. Verbier is a rambling collection of wooden chalets for second home owners in a purpose-built ski resort along with plenty of new massive block hotel complexes. It is not an old charming Swiss village that you may expect. Note: February and early March are peak season with tons of Europeans on vacation. If you have the chance, make sure not to miss the Verbier Extreme snowboard competition in late March.

To reach Verbier snowboarding from Geneva by car, head east on Route A1 and south on Route A9 into Martigny. Follow Route 21 through Le Chable towards Verber.

To reach Verbier by train, head to Martigny and transfer to Le Chable. In Le Chable, there are two options for getting to Verbier (no train station). First, there is hourly bus service from Le Chable to Verbier. Second, there is a new Le Chable-Verbier gondola lift that takes about 9 minutes (fee required). 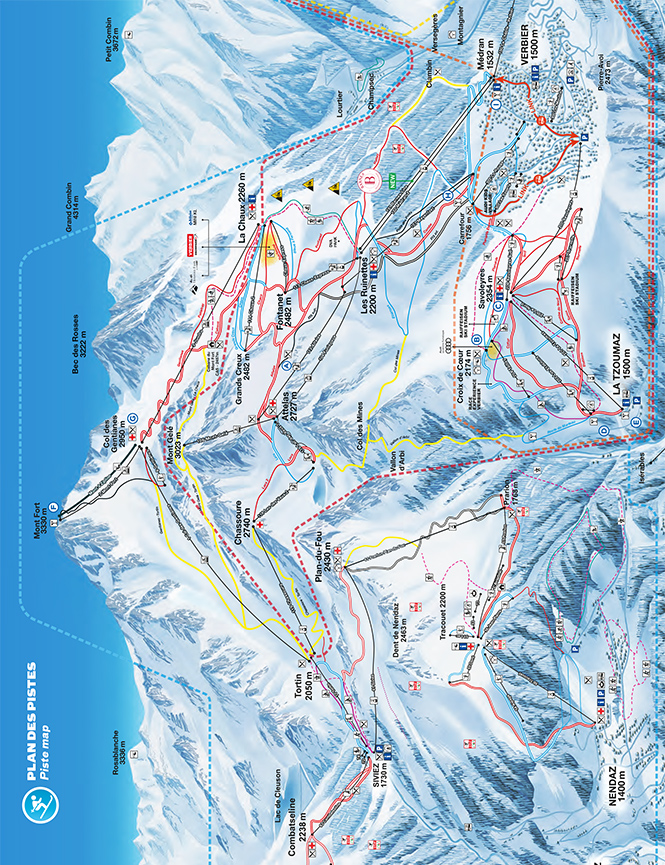