The 2nd most popular snowboarding destination in France.

East of Geneva, the Morzine Ski Area has 65 pistes accessed by 67 lifts with a maximum vertical drop of 1,000m. Morzine generally has intermediate terrain making it suited for beginners and families. One of the more popular runs descends 1,000m over 8km by combining three pistes: Arbis, Lievre and Retour Des Nants.

The Super Morzine sector is up on the plateau northeast of the town of Morzine and stretches east up to Avoriaz through a series of short lifts and pistes. The pistes do not descend from the plateau down to Morzine but are accessed only via a gondola on the north side of town.

Overall, the piste signage and layout can be very confusing. There are several very long, unexpected traverses. Plus, in low snow seasons, you will come across closed pistes, such as ones leading back to town, without any warning.

If you are looking for some challenge, check out the Nyon pistes or Chamossiere bowl for steep slopes with deep powder sides. Keep an eye out for the freeride zone. Alternately, there are several pistes in the bowl accessible by the Rosta lift an the Ranfoilly Express lift that is perfect for new freeriders. If you are into glades, try the trees near the Troncs lift and the Tetes lift.

The Portes du Soleil ski domain is one of the largest in the world linking 14 villages on both sides of the Swiss-French border southeast Geneva. The very family-friendly Portes du Soleil encompasses 206 lifts serving 283 pistes totalling 650km over 400 hectares of terrain. The pistes are classified as 41 green, 104 blue, 110 red and 28 black. From a snowboarders perspective, the classifications at Portes du Soleil can be translated as green means walking, blue means occasional walking, red means intermediate and black means difficult. In addition to the groomed pistes, there is plenty of off-piste terrain to explore under craggy peaks and down steep couloirs. Keep in mind that there are plenty of t-bars and Poma platter lifts spread throughout the region, along with flat or rolling traverses between ski areas. Overall, you are not going to find many snowboarders here, maybe 15%, except up at Avoriaz. By the way, Avoriaz makes for a great central and high elevation base to explore the entire Portes du Soleil region and it has exceptional terrain in every direction. Since the region tends to be lower in elevation, snow depth can be a problem throughout. If the quoted minimum depth is less than 60cm (24 inches), the off-piste routes are pretty sketchy to explore and you will be stuck on the icy groomed pistes. There can be some inconsistencies in published snow reports, such as centimeters reported as inches, so make sure to check several snow report sources before coming.

If you are looking for some apres ski action, try La Kinkerne, Crepuscle, Bar Robinson, and Le Rhodos. When you are ready for some nightlife, try Le Paradis nightclub, Le Dixie Bar, The Cavern, and finish with Le Paradis Du Laurys and the Opera which are open to 4am.

To reach the snowboarding at Morzine, the nearest airport is Geneva (GVA). Unfortunately, the closest train stations near Morizine are Cluses (29km) and Thonon-les-Bains (32km) which take about 45 minutes by bus to the ski area. The best bet is to prebook a shuttle bus from the airport directly to the resort (90 minutes). 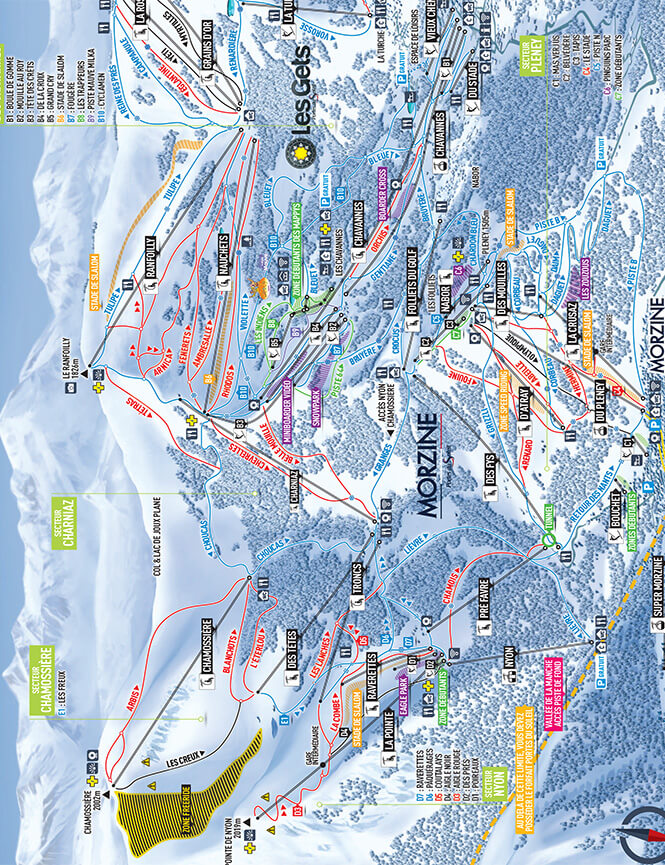