The 4th most popular snowboarding destination in Switzerland.

South of Zurich, the village of Andermatt makes a great snowboarding base for exploring the entire Gotthard Oberalp Ski Arena. The Gotthard Oberalp Ski Arena encompases three distinct ski areas, including Gemsstock, Natschen and Sedrun-Oberalp, with a total of 125km of pistes served by 20 lifts. The Ski Arena is known for its freeride ski routes and not really known for its terrain parks.

The best jewel of the three ski areas in the Gotthard Oberalp Ski Arena is the Gemsstock. Located just south of Andermatt, the Gemsstock is infamous with extreme freeriders and backcountry snowboarders, and to many, it rivals both Chamonix and Verbier. The Gemsstock ski area has 12 pistes served by 4 lifts accesing a maximum vertical descent of 1520m. But the real action here is off-piste, which is expansive. In addition to a couple marked off-piste ski-touring routes, there is plenty of off-piste backcountry powder accessible from the Gemsstock summit and off the backside as well. The lift-accessed, off-piste terrain is considered one of top three destinations in Europe. Just keep in mind that off piste routes have significant avalanche exposure and may have glacial crevasses. Start by heading up to the 2,912m high Gemstock Mountain for a spectacular panoramic vista of more than 600 summits -- then cruise down the infamous Bernhard-Russi-Run over St Anna Glacier and Gurschen Glacier. Follow this up by continuing down the yellow freeride route all the way back into town.

When heading off-piste on Gemsstock, you may wish to hire a guide, such as Bergschule Uri (bergschule-uri.ch), since there are plenty of cliffs and couloirs. The best freeride routes, which make Andermatt famous, are not on the official lift area map. You may wish to check out snowlimit.ch for GPS tracks and also consult with the folks at Internet Cafe 61 Gotthardstrasse about the snowboarding freeride routes.

After a morning of snowboarding Gemsstock, try fueling up at the mid-mountain Gada Bar at the base of the Lutersee t-bar.

The big news over the past couple years has been the construction of lifts to directly interconnect Natschen ski area with Sedrun-Oberalp ski area. In the past, you would have to use the train to get between the areas. While the combined areas don't have the massive freeriding of Gemsstock, its sheer size and side-country lines make for a couple days of adventure. Now, there are pistes and lifts providing interconnect across Oberalp Pass allowing a complete bypass of the past train connection.

Apres ski tends to be an in-town affair since there are no bars at either the Gemsstock or Natschen base areas. Try checking out the Himalaya Bar, then Spycher, and then Di Alt Apothek, but don't get your hopes up since they will all be pretty mellow (especially mid-week). If you're looking for an authentic Swiss dinner, then try the Gasthof Ochsen, the Gasthof Sonne or the Gasthaus Tell. And, if you can make it to late-night after a long day of ripping it up, try heading to the Schlesselbar or De Prato.

The base town of Andermatt is a charming village that is over 800 years old. It is known for its rambling streets with granite houses. Sadly, there's a lot of development pressure especially on the edge of town. Located on the Gotthard Massif, the region has a very good record for annual snowfall capturing storms from the west, south and even north. And, luckily, most slopes are north facing and hold snow well. By the way, some older literature still mentions the Winterhorn lift system based out of Hospental west of Andermatt -- this lift system is permanently closed.

To reach Andermatt snowboarding from Zurich by train, you'll take the regional train through Luzurne to Goschenen. In Goschenen, you will switch to the Matterhorn Gotthardbahn cog railway for a 15 minute ride up to Andermatt.

To reach the snowboarding in Andermatt from the east in the Canton of Grabrunden, you will need to pickup the Matterhorn Gotthardbahn railway starting in Ilanz. It will run west through Disentis and Sedrun heading over Oberalppass to Andermatt.

PRO TIP: Since the weekends can be crowded, hit the early Saturday cable car up Gemsstock which starts at 08:00 (verify since it is sometimes 08:30). If possible, avoid snowboarding Andermatt on Sundays which are the most crowded day of the week. Andermatt has adopted dynamic ski lift ticket pricing, so make sure to purchase you ticket online well in advance. By the way, if your snowboard is in need of service, try out the Alpina Sport, which offers an excellent wax and edging at a reasonable price (same day, too). 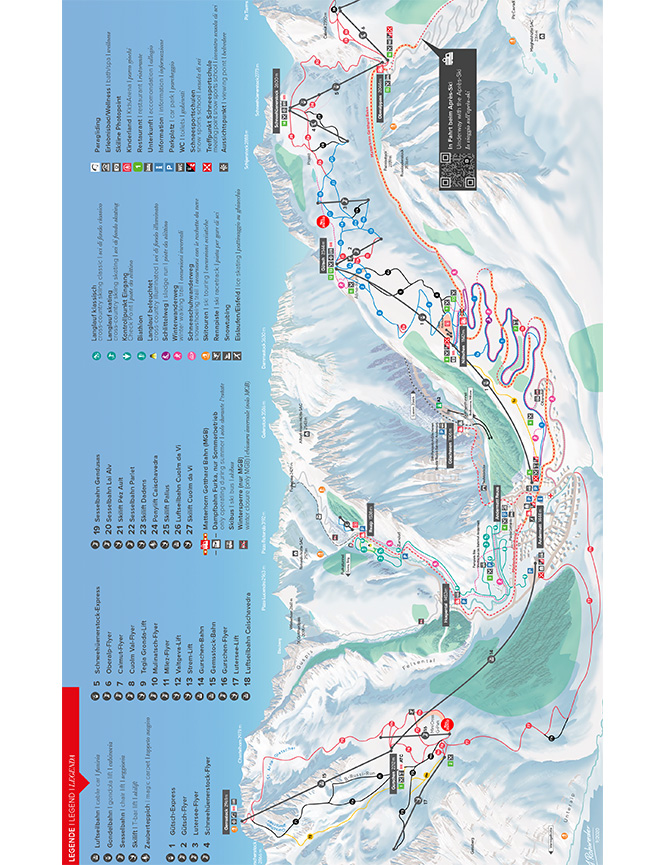