The 7th most popular snowboarding destination in Austria.

Northeast of Innsbruck and east of Worgl, the SkiWelt is a massive ski arena that interconnects nine villages. Matter-of-fact, it is one of the largest ski regions in Austria. This very family-friendly resort has 288km of pistes that are served by 90 lifts accessing a maximum descent of 1200m. The level of difficulty of the pistes range from 45% beginner to 45% intermediate to 10% difficult, so most of the pistes are well-suited for beginners and intermediate snowboarders.

The nine linked villages include Going, Ellmau, Scheffau, Söll, Itter, Hopfgarten, Westendorf, Brixen im Thale and Kelchsau. In addition, there are runs and lifts down from Kreuzjochlsee to Ki-West, which has a ski bus to Kirchberg in Tirol. Overall, the villages and summits are relatively low elevation, so it is best experienced during big snow seasons.

In addition to the SkiWelt Tour, make sure to snowboard the 7.3km route from the Hohen Salve summit down to Söll. It has a 1200m vertical descent along the route. And, if you are looking for steeps, don't miss the extreme Alpseite piste from the Choralpe mid-station that swiftly descends 500m over 1.5km. When you're ready to get off the groomed pistes, there are 23km of ungroomed ski routes spread throughout the SkiWelt that are marked with red squares. The best ski routes are off the Hohe Salve near lifts #22 and #42, and also in the Talkaser area above Westendorf. Keep in mind that true off-piste freeriding is discourage within the SkiWelt.

For the freestyle snowboarders in your crew, the SkiWelt Wilder Kaiser-Brixental ski arena has four terrain parks to session. These terrain parks include the Kaiserpark Ellmau, Hans im Glück Skiparcours, Big Playground Westendorf, and Hexenwelle Söll. The Kaiserpark Ellmau is located at the Tanzbodenbahn (Lift #99), and has two lines including an easy line with 3 boxes and an expert line with 5 boxes, rails and a kicker combo. The Hans im Glück Skiparcours is located under the Hans im Glück gondola, and has two lines with boxes, jumps, banked curves and tunnels. The Big Playground Westendorf is located off the Gampenkogelbahn (Lift #119), and has three lines to session from easy to difficult. Lastly, the Hexenwelle Söll snow park is a smaller terrain park with 3 medium size kickers and a few other features.

Within the ski arena, there are three villages that are located on the train line from Worgl. While both Hopfgarten and Westendorf are both scenic, the village of Brixen im Thale on the train line is centrally located within SkiWelt Wilder Kaiser-Brixental. The other villages connected by SkiWelt tend to be quieter and more residential.

After a long day of snowboarding the SkiWelt, there are several apres ski options. The most popular apres ski destinations include the Sternbar in Scheffau, the Papalapup in Brixen im Thale, and the Moonlight Bar in Söll.

To reach the snowboarding at SkiWelt Wilder Kaiser-Brixental from Munich or Innsbruck, take the train to Wörgl. In Wörgl, connect to the regional train leading towards Hopfgarten, Westendorf and Brixen im Thale.

PRO TIP: If SkiWelt doesn't provide enough snowboarding, there is a combo lift ticket available for access to the Kitzbuhel ski arena. There is an interconnect between the areas near Ki-West.

Overall, SkiWelt is the 7th most popular snowboard & freeride destination of all 79 snowboarding resorts in Austria. 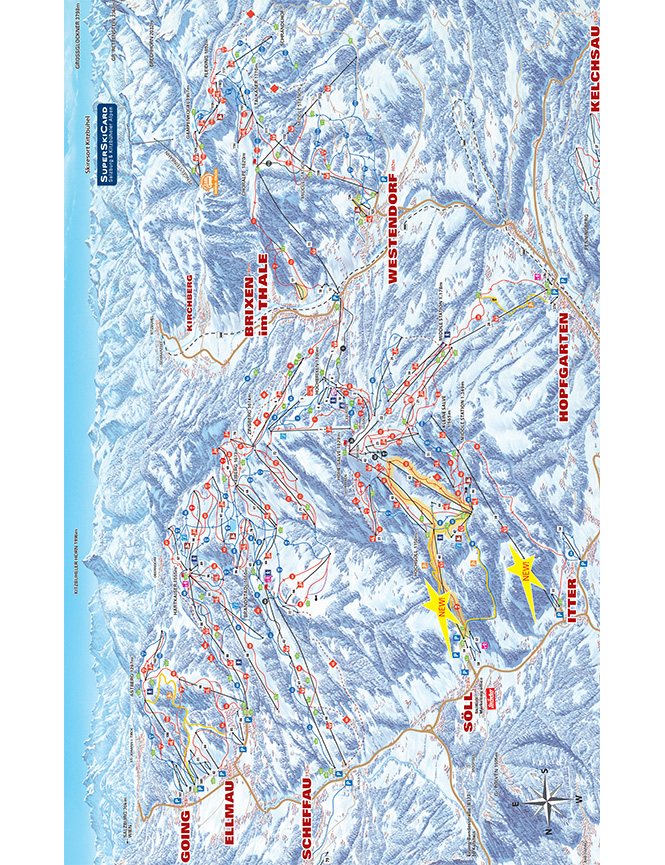