The 8th most popular snowboarding destination in Austria.

Southwest of Innsbruck in the Otztal valley, the Sölden ski area has 66 pistes totalling 100km that are served by 31 lifts providing access to a vertical descent of 1,885m. The main Sölden ski area consists of three big mountains over 3,000 meters: Schwarze Schneide, Gaislachkogel and Tiefenbachkogel. There are two glaciers above Soelden, Rettenbach and Tiefbach, that are open to lift-accessed snowboarding, but make sure to stay on the groomed pistes to avoid crevasses. The longest run, Schwarze-Schneide to downtown Soelden, is a 15km route descending over 2,000m.

Generally, Sölden is known for its moderate pistes, with very few real black-diamond runs. Make sure to check out the powder on either side of Schwatzseekogl, but watch out for rocks. If you need a grand tour, try the Big 3 Rally which covers the three big mountains for a total of 50km of snowboarding.

If you are looking for some off-piste freeriding, try heading to the top of the Gaislachkogl (3,058m) and ride on down to the Wasserkartal under the gondola while watching out for cliffs and avalanches (check conditions prior at the Soelden Freeride Centre). There's also another area under the Giggijoch gondola which starts in a powder bowl leading into glades. There is usually good powder to be found on either side of the Schwartzseekogl where it gets steep (but watch for rocks). Up on the Tiefenbach Gletscher, try taking T-Bar Lift #38 up and turn left along the ridgeline. The ridge is atop a sweet powder bowl with descents back down to the t-bar base (watch out for crevases). Lastly, the ski route down from Rettenbach to the Rettenbachtal valley is a nice freeride.

If you are seeking some park action, the freestylers in your crew should check out the large terrain park under the Silverstrass Express lift. There are usually 3 lines to choose from that include rails and jumps of varying sizes. The bigger hit line for pros typically has 2 massive kickers and long winding rails. The other terrain park, Almdudler Snopark, is above Giggijoch and accessible from the Hainbachkar lift. The Almdudler has been maintained by the QParks crew. The pro-level line is usually on the right, starts will some rollers before going big with three kicker-tabletop combos and a technical jib line. With the declining interest in parks here, Soelden discontinued their halfpipe many years ago.

For authentic Austrian food, make sure to stop by the Alm Haus. If you're up on the mountain, check out the Huhnersteign on the Rettenbach glacier ski route. Other good on mountain huts included the Eugens Obstlerhutte (coming down from Hochsolden) and Gampe Alm (on the way from Hochsolden to Gaislachhkogl). Overall, there are over thirty mountain huts to enjoy.

Solden is not known as a quaint Austrian village like some other resorts. The town is spread along a long, sterile strip divided by a busy road. When you're ready for some apres ski action, there are luckily a few good choices. If you are over in the Gaislachkogel area, definitely go up to the infamous Philips Bar in Ausserwald/Innerwald via the funicular. If you are over on Schwarze Schneide, then check out Sonnblick Bar on piste #19/20 or over at Eugene Obstlerhutte up on the mountain. Next, continue apres ski at the Kuckuck at the Gigglijochbahn base, Schrim Umbrella Bar, Bla Bla Bar, Hinterherr or Marco's Bar near the post office. For nightlife, check out Kata Pult, Black and Orange, Fire and Ice, Grizzly Bar, Kuhstall, Party Haus, Giggi Tenne, Rodelhutte, Stamperl Bar or the newer Party Haus.

In addition to the snowboarding in Solden, there are several other ski areas in the Oetztal Valley making up the Oetztal Ski Region. First and foremost, you will want to check out the nearby, high-alpine Obergurgl-Hochgurgl ski area. Other ski areas include Gries, Niederthai, Vent and Hochoetz-Kuehtai. There is a new Ötztal Superskipass that covers all of the aforementioned ski areas for a total of 361km pistes served by 90 lifts.

To reach the snowboarding in Solden, it is best to fly into the Innsbruck airport. There is a public bus from the airport to the main Innsbruck train station. Take the train west from Innsbruck to the Otztal train station. From the Otztal train station, use Post Bus #4194 from Otztal to Solden, which takes about an hour. If you're trying to choose where to stay on the long highway strip running through the valley, it is worth considering staying near the Giggijoch gondola base where there is more evening action within walking distance. 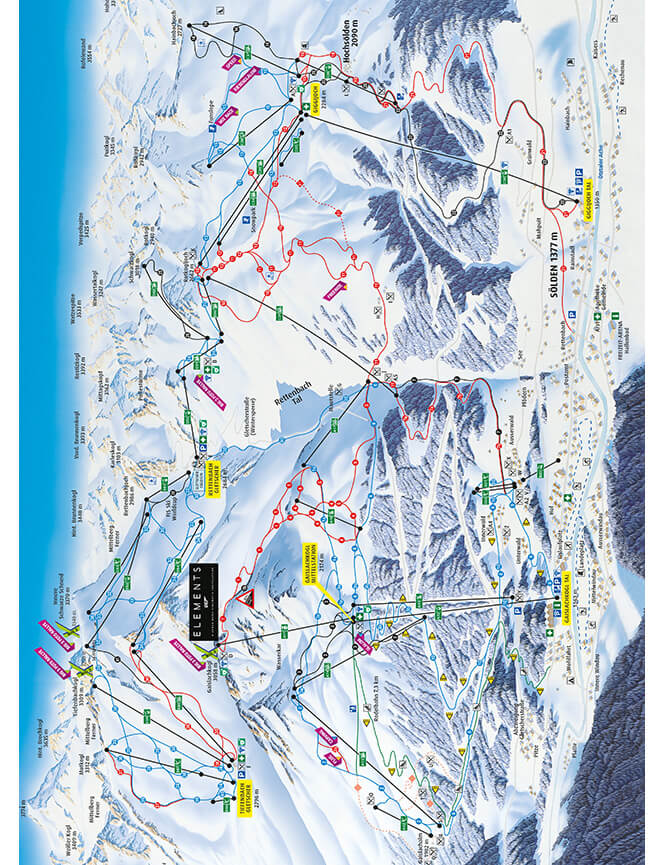