The 16th most popular snowboarding destination in Switzerland.

East of Geneva in the heart of the Bernese Oberland, the Gstaad Super Ski Region is a massive region of semi-interconnected ski areas. It consists of six separate ski areas with some having one lift and some having 100km of pistes. Overall, this ski region has over 100 pistes totaling 250km that are served by 30 lifts with a maximum vertical descent of 1000m.

Gstaad is located just east of the Röschtigraben (rösti line) in the predominantly German-speaking side of Switzerland. It has a reputation for glitz and glamour along with being expensive. Much of that glitz has faded over the years but the high expense has stayed. There are plenty of families and hardly any fur-lined designer jackets. Except in the historic pedestrian zone of Gstaad, there are few hotels while there are plenty of vacation rentals and second homes. The lift bases of each ski area tend to be a long walk from the respective towns, lodging and train stations. Since you'll need trains and buses to reach all the far-flung ski areas, it's best to stay near the train stations in either Gstaad or even Saanen.

The Gstadd region is known for unreliable snow coverage due to its low elevation slopes. None of the individual ski areas are particularly large and most have a maximum vertical of 500m. At this intermediates paradise, the spread out ski areas area connected via free ski buses and train. The layout and ski area names can be quite confusing when looking at the piste map, especially because most maps have north-south reversed!

The largest ski area is north of Gstaad above the 5 villages of Schonried-Saanenmoser-Zweisimmen-St Stephan-Rinderberg and offers 105km of pistes known for freeriding at Chalte-Brunne. The Schoenried base for the Horneggli lift looks furthest from Gstaad on the ski map, but it is actually closer than some of the other ski areas. Again, it's a long walk from the train station to the lift.

Directly above Gstaad is the ski area of Eggli, which connects with La Videmanette and Rougemont. The Eggli ski area connects the villages of Gstaad, Saanen and Rougemont. Again, the lifts are a long walk from the town center and train stations. The snowboarding gets better the further and higher you get from Gstaad. The north facing pistes leading down to the bases are wonderfully long but get harder packed and icier while descending. If you happen to hit it on the first nice day after a snow storm, then there is a surprising amount of side-country and off-piste lines to explore, especially the Chalberhoni lifts and even under the La Vidamanette gondola (guide recommended to explore the coulors from the summit). Makes ure to stop for lunch at Restaurant Waldmatte in Chalberhoni. At the end of the day, keep in mind that piste #70 down to Gstaad can be closed for many reasons (icy, not enough snow) and a down-lift on the gondola may be required. Either way, it's about a 20 minute walk back to the Gstaad train station.

The most interesting ski area for advanced snowboarders coming to Gstaad is the Glacier 3000 ski area up on the Diablerets glacier, which is a 15km free ski bus ride away. The Glacier 3000 bus stop is at the base of the Reusch lift, which is the terminus of the newer 8km expert piste descending 1700m! Glacier 3000 ski bus runs hourly to the Col du Pillon cable car base (Reusch cable car has been closed since winter 2019).

The village center of Gstaad is a quaint Swiss village and the charming core has a quiet pedestrian zone. At night, the old traditional buildings are adorned with small white lights. It isn't known for much of an apres ski scene or much nightlife. The only limited apres ski option in the Gstaad pedestrian zone is the Cable Car Bar across from Posthotel Rossli. The best traditional Swiss dinners can be found at either Saagi-Stubli (Gstaaderhof) or Restaurant Alti Poschi (Posthotel Rossl).

The freestylers in your crew will probably want to check out the Vanillaz Park, which is located above Saanenmoser on Saanerslochgrat. It has plenty of boxes, kickers and a wall ride. Depending upon the seasonal snow conditions, they may build out a quarter pipe.

To reach the snowboarding in Gstaad from Bern, head south on Route A6 to Faulensee. Follow Route 11 east to Gstaad. But before you hop in a car, this ski area is very accessible by train, which runs through the main valley.

Overall, Gstaad is the 16th most popular snowboard & freeride destination of all 87 snowboarding resorts in Switzerland. 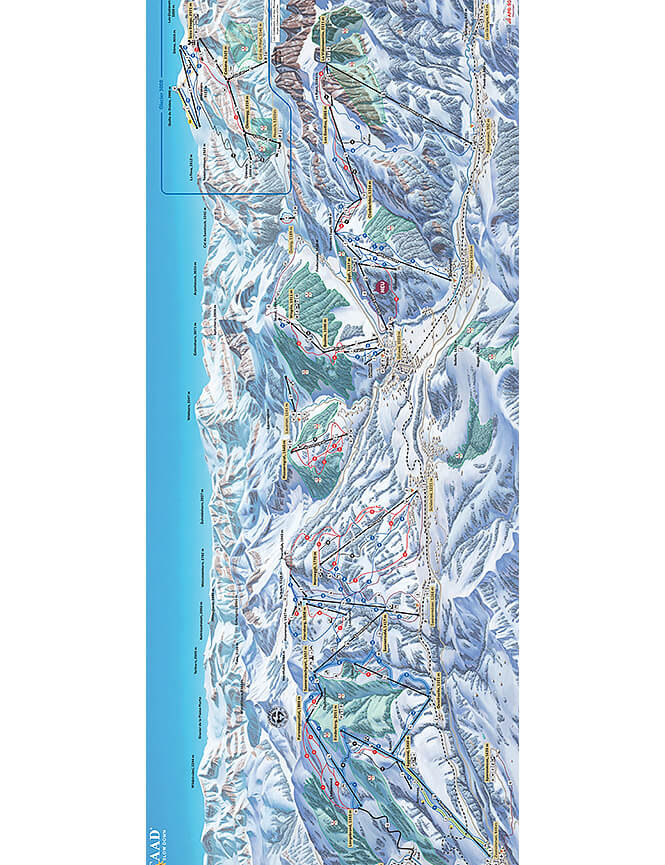