The 12th most popular snowboarding destination in Switzerland.

South of Zurich and northeast of Zermatt, the Saas Valley (Saastal) has become world-renowned as a mecca for the youthful and young at heart semi-pro snowboarders. In the Mischabel range of the Valais Alps, there are three related, but not interconnected ski areas in the valley: Saas-Fee ski area, Saas-Grund Ski area, and Saas-Almagell ski area. While one may not choose to explore more than one of these in a given day, these ski areas combined have 145km of pistes served by 38 lifts. While there is a combined lift pass covering the Saastal region, you would need to take one or more Post Buses from area to area, so you may wish to just get a single area lift pass.

The main Saas-Fee ski area has 100km of pistes divided into 35 runs that are served by 22 lifts. There are 13 blues (easy), 14 reds (moderate), 5 black (difficult), and 3 yellow (ungroomed) pistes. Generally, the pistes tend to get more difficult as you move up the lift systems. Overall, the rate system seems to overrate the difficulty of the runs relative to many other places in the Alps, so do not expect blacks to be seriously steep. But, with that said, this is big-mountain territory with the heavily-crevassed tongue of the Fee glacier covering the steepest terrain so exercise caution if you venture off-piste accidentally. Of special note, there are several lifts that provide summer service to the 20km of glacier runs, such as up on Allalin peak.

While the base area is at 1,800m and the Allalin summit is at 3,500m, you should not be expecting to do 1,700m vertical laps. First, there are two lifts required to access the summit (two trams and a vertical lift). Second, if there is poor visibility, the Allalin summit may not be open. And, third, if there is concern over avalanche conditions, pistes #17 and #10 may not be open therefore cutting off the route down. A much more practical expectation is 1,200m laps from the Felskinn summit.

This ski area is centered around the car-free village of Saas-Fee, which is situated in a deep box-valley at an altitude of 1,800m. The valley is surrounded by snow-covered peaks which soar over 4,000m. In this section of the Mischabel mountain range, there are thirteen glacial shrouded peaks, including some of the highest in Switzerland, such as the Dom (4,545m). The town of Saas Fee has that quaint Swiss feel with narrow, winding streets, wooden chalets and mostly small hotels. This town still retains its authentic charm and thankfully lacks tons tourist souvenir shops. If you are looking for vistas, make sure to head up the gondola on Allalin mountain for spectacular views of the ice-blue glaciers with crevasses and undulating ridges.

Over the past few years, Saas-Fee has become the European snowboarding mecca due to the year-round riding on the glaciers. The Professional Snowboard Association trains on the three 260 foot long halfpipes, the snow parks and the slalom course. The village is filled with baggy-clothes, world-class snowboarders seeking the stunts and the steep network of runs linking the summit-to-base with few flats. After a few of those half-hour descents through stunning scenery, you will understand how this valley became known as the Pearl-Of-The-Alps.

On powder days at Saas-Fee, make sure to check out the bowls below the Spielboden Gondola. These steep bowls hold epic powder stashes and offer a vertical drop of about 1km. On windy or overcast days, you will want to avoid the top half of the mountain. Try checking out the terrain in the Berghaus Plattjen area, which has some amazing treed glades to explore.

For uncrowded runs at the end of the day, try the Plattjen area which tends to catch the last sun of the day. There is a high-speed, six-person gondola providing access to a run with 760m of vertical drop. For some exceptional views, try taking the Felskinn Cable Car up to Mittelallalin. From here, there are a wide variety of runs down on which you can appreciate the spectacular scenery surrounding you. Note, there are two small tow-lifts that provide access from town to the lower Felskinn Cable Car station. From the top of the Felskinn Cable Car, you can take the Metro Alpin vertical lift underground about 485m vertical up to Mittelallalin. At Mittelallalin, there is a panoramic view of the dozen peaks over 3,960m. While most beginners and intermediates that actually came this far will traverse left, if you are looking for some challenge you will want to traverse right for a choice of frightfully steep descents.

When it comes time for lunch on the slopes of Saas-Fee, you have got to check out the Eispavillion, which is the worlds highest revolving restaurant. Also, make sure to check out the Restaurant Gletschergrotte below Spielboden, and Britannia Hutte, too.

The Saas-Almagell ski area has 10km of pistes divieded into 8 runs that are served by 9 lifts. This is the smallest of the three areas and sees the least amount of skiers. It is also the furtherest away at about 5km from Saas-Fee. It requires two buses to transfer to Sass-Fee, though only one bus to return. Most of the people at this ski area are either staying in Saas-Almagell or are down valley in Saas-Grund.

The Saas-Grund ski area has 35km of pistes divided into 6 runs that are served by 7 lifts. Generally, the runs get more challenging as you go up the lifts. For the most challenging runs, you will want to be on the Hohsaas gondola (which closes during poor visibility or avalanche conditions) and come down the Triftgletscher. The maximum vertical could be 1,650m, but the runs on the lower half of the mountain are pretty easy with many traverses. So many, you will be using the runs on the upper half where the maximum vertical is 800m.

If you are looking for a rowdy, Austria-style apres ski scene, this is not the place. For the most part, the Saastal is very family-oriented, and the towns have a significant year-round local population which includes many children. There are a few places in each town that you can find some people celebrating the days runs, but you will most likely not find them dancing on the tables and doing shots. The apres ski scene at the Saas-Fee base starts early since the sun descends quickly below the high western peaks and it gets cold fast. So, before it gets too cold (i.e. before 4pm), check out the outdoor patio of the No One Snow Bar or the heated patio of the Black Bull Bar or SkiHutte located in Hotel Burgener. There are also the Derby, No. 1 Bar, Muhle, Rendezvous and Christiania. When it gets too cool to be out on the terraces, head over to the Chemi Stube in the Christiania, the Saaserhof, Nestis or the Rendezvous.

What nightlife can be found, will definitely be found after 11pm. For the younger under 25 crowd, there is the Go-Inn Bar, the Poison Underground Nightclub, and the Crazy Night in the Metropol, which is known for good music. The local Swiss head over to Pic Pic, and to the Happy Bar for a quieter and less expensive night. And, of course, you really need to check out the Popcorn Shop at the Hotel Dom for plenty of music and a wide variety of locals and tourists.

The Unique Hotel Dom is the heart of the off-slope action for snowboarders in Saas-Fee. In addition to the comfortable hotel that is attuned to the needs of snowboarders, there is an excellent snowboard shop which turns into a nightclub afterhours. This Popcorn Shop is a popular place to come late night. There is also the more relaxed Lounge upstairs if you are looking for somewhere quieter to go.

It is important to keep in mind that there are plenty of glaciers, cliff, rocks and avalanche zones within these ski areas. Therefore, unless you really know where you are going, you should stick to the marked, groomed pistes. When off-piste, the hazards such as glacial crevasses, rock faces and rocks will most likely not be marked and are extremely hazardous. If you really want to go off-piste, there are many local guides who will gladly share with you their favorite runs and this is highly recommended.

In light of the avalanche hazards, the Saastal ski safety staff takes snow safety very seriously here. As they should with the huge peaks and big snowfall you will find here. Therefore, if you find a lift or piste that is not open at the start of the day, it will most likely not be open that day. Also, if it is snowing heavily in the morning, you may find that lifts start to close early so watch your exits, especially in Saas-Fee. Bad weather is known to regularly close the ski area for one or more days.

To reach this area by train, plan to take one of the many international connections to Birg or Visp, which is south of Zurich or southeast of Bern. From Birg or Visp, transfer to the Post Bus heading to Saas-Fee. This bus will make numerous stops along the way in Saas-Grund and in Saas-Fee.

Overall, Saas-Fee is the 12th most popular snowboard & freeride destination of all 87 snowboarding resorts in Switzerland. 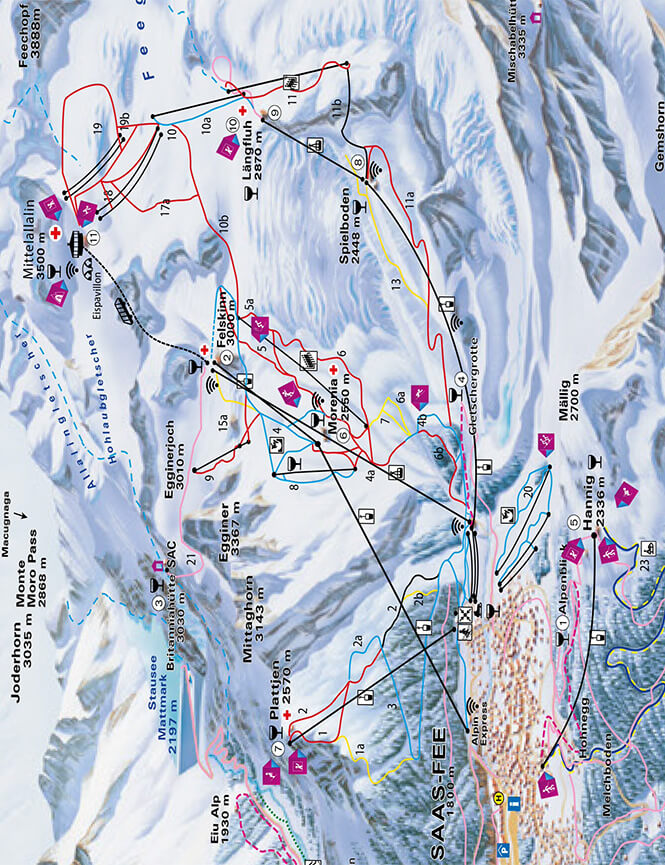