The 10th most popular snowboarding destination in Switzerland.

Southwest of Zurich and south of Interlaken, the Jungfrau region offers a wide range of terrain spread across three related, though not interconnect, ski areas. Overall, there are 44 lifts and railways serving these areas which comprise 213km of pistes. Since 33% of the runs are blue and 46% of the runs are red, that means only 16% of the runs are marked black (difficult). So, if you are looking for challenging groomed snowboarding runs, this may not be the place for you. The three ski areas in rough order of difficulty include the following: Grindelwald-First, Kleine Scheidegg-Mannlichen, and Murren-Schilthorn.

The Kleine Scheidegg-Mannlichen ski area is the more popular of the two snowboarding areas directly accessible from Grindelwald. The area has 110km of pistes served by sixteen railways and lifts. While you could do a 1,500m vertical run down from the high point, it really isn't practical to do this more than once a day and there are many flat traverses along the way. The maximum effective vertical is about 1,000m that you could do regularly. The Kleine Scheidegg-Mannlichen area tends to be a crowd-pleaser to a majority of the tourists. It has shallow, less-steep pistes and some gentle rolls. There are many traverses that you need to be alert for or you will find yourself doing a lot of walking, especially near Kleine Scheidegg.

On a powder day, there are two options. Option A would be to go for the longer powder runs by heading up the Mannlichenbahn gondola early to the summit and doing laps back down to the mid-station at Holenstein. Option B would be to then work your way over to the runs south of Kleine Scheidegg such as off the Eigergletscher making sure to hit the Lauberhorn summit along the way.

There are three types of lift passes sold: the Sportpass Grindelwald-Wegen for Grindelwald-First and Klenie Scheidegg-Mannlichen, the Sportpass Murren for Murren-Schilthorn, and the Sportpass Jungfrau which covers all three ski areas. The later would not be too useful for a single day of skiing since it takes almost two hours to make it from Grindelwald to the Schilthorn summit via the trains and lifts. Typically, you would only visit one of the three ski areas in a given day due to the time required for transfer logistics.

If you are looking for powder, it is best to visit the ski areas in the Jungfrau in January and early February for the lightest powder and best coverage. With that said, if it has snowed overnight, you may find that many runs are closed the next day while avalanche conditions settle. Generally, if the run does not open at the start of the day, it probably will not open that day. This is very true at the Grindlewald-First ski area. Surprisingly, you may find many of the seemingly dangerous avalanche routes at Murren-Schilthorn are open after big snows, so make sure you use your own good judgement before jumping in.

Due to the proximity to both Bern and Zurich, the ski areas in this region get a heavy weekend crowd. Therefore, it is best to avoid the weekends.

Overall, it is important to note that the marked level of difficulty for most of the slopes are over-rated. In other words, compared to other ski areas in the Alps, the most difficult marked runs are not that difficult and are pretty intermediate. Also, on all levels of difficulty, you can expect to find extensive flat traverses on many pistes.

If you choose to explore terrain outside of the sticks marking the groomed pistes, watch out for barbed wire fences that may be partially hidden by the snow, especially in the glades and on the lower slopes approaching towns. Of even greater imporance, avalanches, rocks and cliffs are a further hazard for freeriders. If you go outside of the markers, you can expect to find plenty of rocks just below the snow surface. Many of the cliffs are not well marked or signed. If it is snowing heavily during the day, the ski patrol does not tend to close avalanche prone areas so you are on your own to monitor conditions.

If you are looking for a rowdy, Austria-style apres ski scene, this is not the place. Honestly, there really is not any apres ski scene. The best you'll find is in one of the towns away from the lifts. In Grindelwald, you will find some people celebrating the days runs at the Avacado Bar and at the Espresso Bar. If you are looking for some nightlife, plan to stay up late since the action starts after 11pm, especially at the Espresso Bar or the Mescalero Disco which are both at Hotel Spinne.

To reach this area by train, plan to take one of the many international connections to Interlaken Ost, which is southwest of Zurich or southeast of Bern. From Interlaken Ost, transfer to the local Berner Oberland Bahn railway, which serves both Grindelwald and Lauterbrunnen. Once in either of those towns, there are a variety of Post Buses, trams and cog railways to get you to your final destination.

Note: If you plan to head to Kleine Scheidegg for snowboarding by train, here are two great options offered by the Swiss train system SBB. First, there is the discounted Swiss Transfer Ticket which provides a round-trip train ticket from an airport directly to the town near the ski area, plus 50% off any additional train or bus tickets. Second, there is the Snow-N-Rail ticket which provides a round-trip ticket from anywhere in Switzerland combines with a ski lift pass for as long as you need at a total 20% discount (see: http://www.sbb.ch/snownrail ). 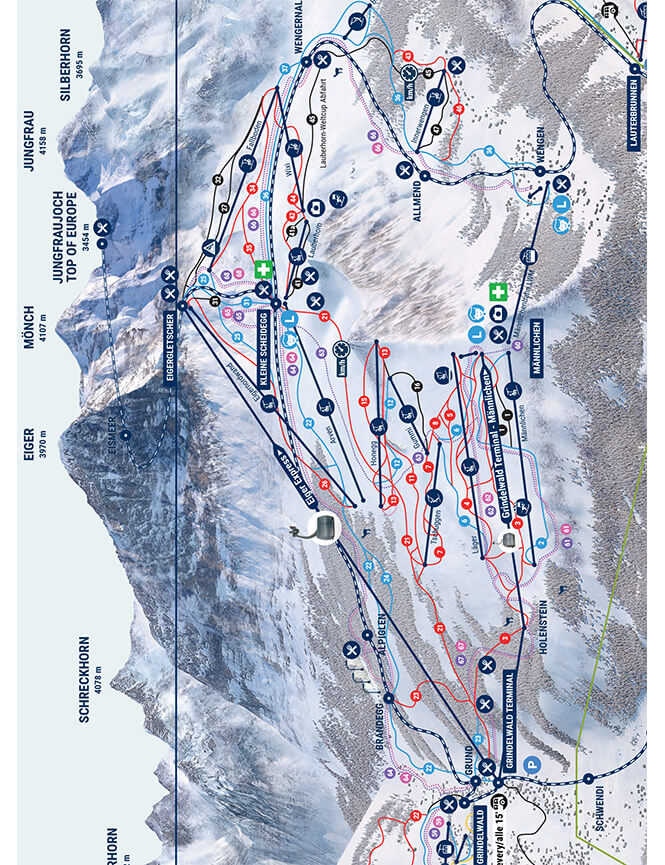