The 9th most popular snowboarding destination in Italy.

North of Venice and northeast of Balzano, the Cortina d' Ampezzo ski area has 66 pistes totaling 70km that are served by 34 lifts with a maximum vertical drop of 1715m. The Cortina area is known for its impressive vistas of the sprire limestone towers making up the Dolomites, but not for it's reliable snowpack. The ski runs immediately surrounding Cortina d'Ampezzo are divided into a fragmented three sectors including Tofana, Faloria Cristallo Mietres and Lagazuoi/5 Torri along with a free ski bus interconnecting them. Watch for the new lift that will finally provides a connection from Pocol to Cinque Torri which results in expanded lift-accessed terrain. The best Cortina d' Ampezzo snowboarding is during the months from January to March, and best on the weekdays since its slammed with weekend tourists.

If you are looking for some challenging big mountain snowboarding runs at Cortina d'Ampezzo, start from the Tofana summit. The best bet for powder runs are from up here, as are the steeps. The upper steeps lead down to gladed sections. Another section to explore is at the top of the Pomedes that leads down the face on an amazingly steep piste.

For the freestyle snowboarders in your party, Cortina d'Ampezzo has two terrain parks to session. The SnowPark is located on Socrepes, and the Freestyle Station is located on Faloria.

After a long morning of shredding, there are several good options for on-mountain lunch. Check out Rifugio Duca D'Aosta on Tofana or Rifugio Averau in Cinque Torri.

It can be challenging to get to Cortina d'Ampezzo for snowboarding. There isn't a train, so you'll need to plan on long bus connections. When coming from the north, there is a train station to Dobbiaco and then a bus (#445) acros the pass heading south to Cortina (50 minutes). If you fly into Venice, then take the bus to the Venezia Mestre train station. From that station, there is a regular bus heading up to Cortina (2.5 hours).

Most snowboarders prefer to stay in the charming old town section of Cortina d'Ampezzo which has cobbled pedestrian zones. While it's just south of the Sud-Tirol border, you won't find any German spoken in this solidly Italian-speaking town. When booking hotels, keep in mind that the star-ratings tend to be a little exaggerated by at least a full star.

PRO TIP - This ski area is only 2 hours north of Venice, so it gets a big weekend crowd. You may wish to only come for weekdays. Also, most people start the day later than usual so get up early if you want to have the slopes to yourself. Cortina is not really known for its apres ski or nighttime club scene, so if you are looking for somewhere to party, this is not it. The best bet for apres ski would be up on the mid-mountain huttes (if you find one going off at the end of the day, stay and hangout). If you are going to push it, you could check out the nightlife scene after midnight at Enoteca, Villa Sandi or VIP Rooms (late).

Note: Since the Dolomites are craggy spires, you may want to hire a guide if you plan to head off-piste especially since the plentiful cliffs are not marked. But if you know where you are going, there is amazing freeride terrain and steep narrow couloirs. Also, the lift system is known to be pretty antiquated and slow. 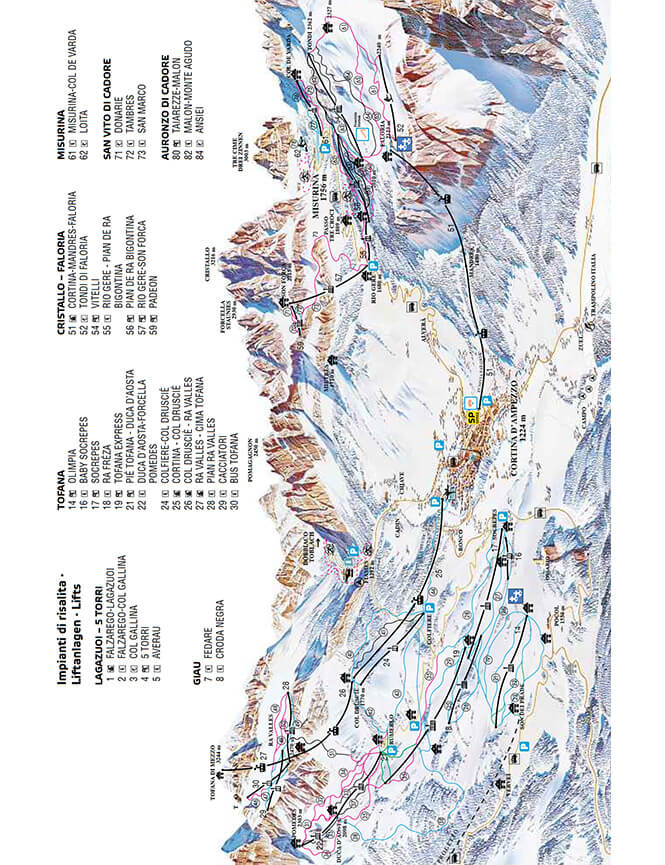