The 8th most popular snowboarding destination in Italy.

Northeast of Milan and Trento, the Livigno ski area has 74 pistes totaling 85km served by 30 lifts with a maximum vertical drop of 900m. Spread across both sides of the isolated Valtellina Valley, the Livigno ski area is generally considered a family-friendly paradise with 42% intermediate and only 8% difficult pistes. And, most snowboarders consider the piste ratings to be over blown -- most blacks are really reds. The best Livigno snowboarding can be found during the months of January and February.

There are two separate ski mountains in Livigno that share a common ski pass. On the east side of town is the Mottlino ski area, and on the west side is larger Carosello 3000. It's just a short walk across town between the two.

The Livigno ski area is popular for its two excellent terrain parks. The Mottolino side of the valley has the main expert level terrain park, the Mottlino Snowpark, with a variety of lines by difficulty. Accessed by the Trepalle chairlift, there are over 60 features along the jib lines and kickers usually spread across 4 routes. Watch for the epic 25m booters and long kicker lines. Over on the Carosello 3000 side of the valley, there is a 1km long terrain park designed for intermediate freestylers with a mix of jib features and kickers. Next to the park is also the Boarderzoo boardcross course.

If you are looking for a little challenge, try the black run down from Della Neve. Otherwise, you'll need to do some hiking to access the bowls. It is a good idea to hire a guide if you really want to find some challenging runs. Until recently, off-piste freeriding has been prohibited and subject to a healthy fine. But the times have changed and there are now many exciting freeride routes. The ski area aggressively promotes safe freeriding and being prepared. And, while freeriding is now permitted in designated areas, it is still aggressively prohibited in protected zones for wildlife. When you're ready for the challenge of freeriding off-piste, look for one of the three designated freeriding routes marked by entry gates. There is also a dedicated freeride map available at the tourist information centers. Local freeriders consider the best to be in Mottolino starting from the top of the Valfin chairlift at Monte della Neve. After heading through the freeride gate, the route descends down to Trepalle. In addition, in recent seasons they have also added six designated freeride routes from the summit that are shown on the new freeride map.

After a long morning of shredding, there are two good on-mountain huts for lunch. Try checking out Passo d'Eiria or La Costaccia.

While not known for its nightlife, you can check out the apres scene at Camanel Di Planon and then head to Stalet at the Carosello base before checking out Tea del Vidal. Then look for nightlife at Echo Bar, Kuhstall Disco Bar or Kokodi, which gets going late and is open until 5am.

With its location in the remote Valtellina Valley, Livigno still have the feeling of a charming traditional village. But, with its isolation, come some challenges in order to get to Livigno. There is no train to the town, so you'll need to drive or take the public bus from the north (Zernez, Switzerland) or from the south (Tirano). If you are coming from the south in Italy, you will need to be prepared from some high elevation mountain driving with tire chains. If you are coming from the north in Switzerland, there is the Munt La Schera tunnel coming from Zernaz, but the lines coming through customs at the border are known to be lengthy in the winter, especially on the weekends. Also, the region is prone to avalanches, so come prepared. While deciding where to get loding, just keep in mind that the village is spread about 5km along the valley floor and the two main base areas are spread 2.5km. There is a public bus that runs the valley from 7am to 8pm.

To get to the snowboarding at Livigno by air, you will need to fly into Milan. From Milan, you can either rent a car to drive through Bormio to Livigno, or take the train to Tirano-Ferrovie dello Stato and then take a bus to Livigno.

Overall, Livigno is the 8th most popular snowboard & freeride destination of all 57 snowboarding resorts in Italy. 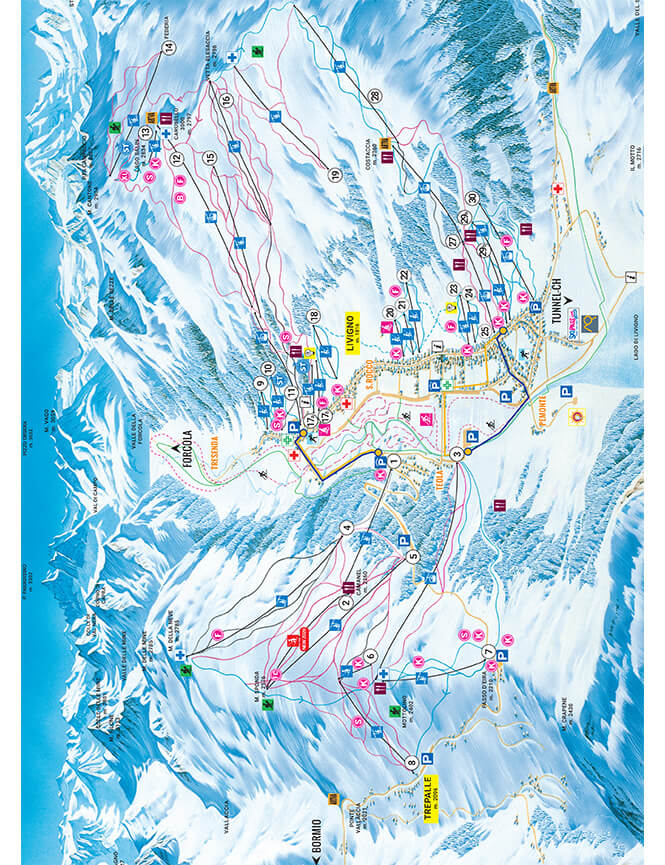