The 13th most popular snowboarding destination in Austria.

Southwest of Salzburg between Neukirchen and Bramberg, the Ski Arena Wildkogel has 16 pistes served by 15 lifts. There are two long runs from the summit down to both Neukirchen and Bramberg, there are usually only done once a day since they are narrow and the snow conditions at the lower sections can be questionable. With that said, the practical vertical drop of most pistes is about 300m -- short, easy and scenic.

While most of the on-mountain facilities are new, there are a few good old huts worth checking out after a long morning of snowboarding, such as the Geislalm, the Wildkogel Haus and the Thurnerstube.

For some apres ski action, check out the outdoor bar at the end of piste #6 as it enters Neukirchen, called Schelfies. For nightlife, the only choice is the Nightlife Disco Bar in Neukirchen.

After a long day of snowboarding, check out the authentic local dinner at Restaurant Johannes Stuber'l in Gasthof Neuhof.

The Ski Arena Wildkogel has been improved and expanded over the past few years. There are new gondolas up to the summit from both Neukirchen and Bramberg. It appears that there are still a few lifts missing from the ski area, though, so watch out for some dead end pistes with no return up, such as #1 and #15.

The Pinzgau valley now has privately-owned, narrow-gauge, hourly train service all the way up to Neukirchen and beyond to Krimml.

Overall, Wildkogel is the 13th most popular snowboard & freeride destination of all 72 snowboarding resorts in Austria. 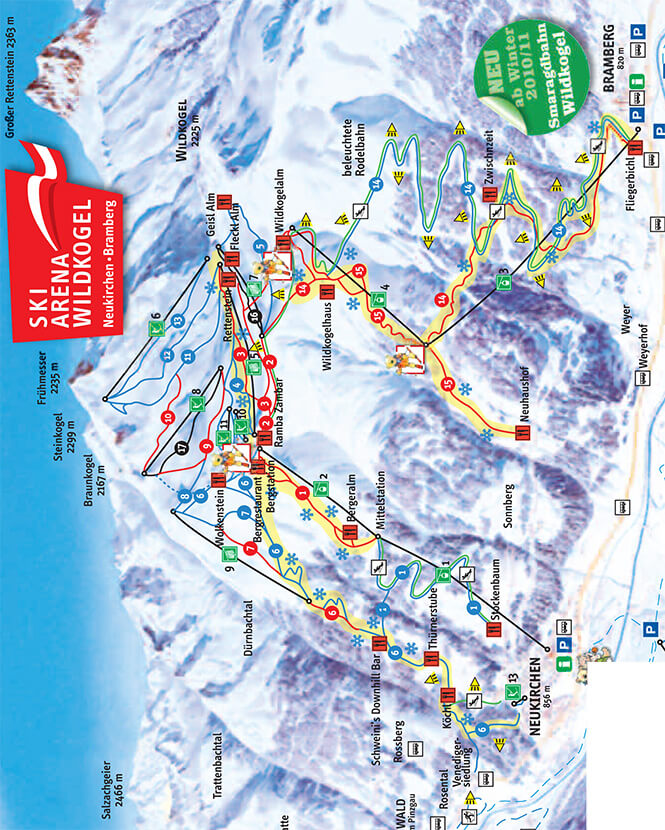