The 24th most popular snowboarding destination in Switzerland.

Southeast of Geneva and east of Martigny, the Veysonnaz ski area 9 lifts accessing 10 pistes. When snowboarding at Veysonnaz, keep in mind that there are a lot of drag lifts, especially when traversing towards Nendaz or the freeriding opportunities in Verbier.

Veysonnaz Ski Area is in a very small mountain community. It is part of Les 4 Vallees ski domain. Located southeast of Martigny, Les 4 Vallees ski domain is one of the largest in Switzerland. Les 4 Valles encompasses 89 lifts serving 91 groomed pistes totalling 410km spread across four massive glaciated valleys. The lifts interconnect Le Chable, Verbier, La Tzoumaz, Nendaz, Siviez, Veysonnaz, Thyon and soon Bruson The pistes are 39% beginner, 44% intermediate and 17% black. In addition to the groomed pistes, there is plenty of ungroomed, marked ski-tour routes and unmarked off-piste terrain to explore under craggy peaks down steep couloirs. Keep in mind that there are plenty of t-bars and Poma platter lifts spread throughout the region, along with flat or rolling traverses between ski areas. Overall, you are not going to find many snowboarders here, maybe 5-10%, unless it is a powder day. Speaking of powder, if you plan to explore the amazing wealth of rocky off-piste terrain, snow depth can be a problem throughout. If the quoted minimum depth is less than 90cm (36 inches), the off-piste routes are pretty sketchy to explore and you will be stuck on the icy groomed pistes. There can be some inconsistencies in published snow reports, such as centimeters reported as inches, so make sure to check several snow report sources before coming. Freeriders will want to stay in Verbier if you can afford it, otherwise consider Le Chable or Siviez. If you are on a budget, make sure to ask the tourism office about the many bunkhouse options - some are on the mountain and offer first tracks options.

After a hard morning of riding, there are several good options on the mountain for lunch. Check out rustic Les Chottes Restaurant near the Les Chottes t-bar lift. Also, the cafe Le Remointze midway down the piste under the Veysonnaz gondola is definitely worth trying. For apres ski action, you want to sech out either Magrappe Bar or Le Tipi.

To reach Veysonnaz, you'll want to fly into either Geneva or Zurich. There is reliable train service from either airport to Sion. From Sion, there is a bus up to Veysonnaz. 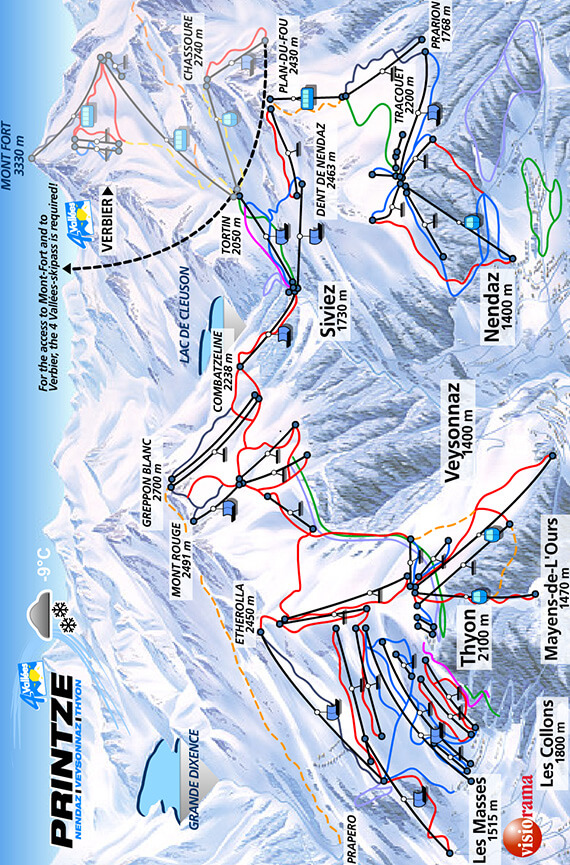