The 35th most popular snowboarding destination in Switzerland.

Southeast of Sion and south of Sierre, the Grimentz-Zinal region is located in a spectacular valley that is truly an undiscovered treasure. There are many Swiss snowboarders that feel it has the best slopes in the Alps with the best powder. The interconnected Grimentz-Zinal ski area has 13 lifts accessing roughly 34 pistes totaling 115km with a maximum vertical of 1200m. The lifts and pistes interconnect the villages of Zinal (1,670m), Grimentz (1,570m) and one-way down to St Jean (1,327m) on a ski route. The newer cable car links the snowboarding routes from Zinal and Grimentz.

Although not well known to most snowboarders, the southernmost Sorebois sector of Grimentz-Zinal has a large freeride zone above Zinal for expert snowboarders called Gardes Bordon. The freeride zone offers unsigned, ungroomed pistes spread over 100 hectares that are only open when the Avalanche Level is #1 or #2.

If you're looking for something big and are very experienced, there is a very long ski route from the top of the Grimentz ski area over to the Vercorin ski area. Starting from the Orzival top station, the remote Vallon d'Orzival ski route leads down to the Tracui lift base in the Vercorin ski area. It is best experienced with a guide and appropriate avalanche safety gear.

Unfortunately, it doesn't take much fresh snow or wind to close the upper lifts and the freeride lines along with the Chamois piste back from Zinal to Grimentz. Overall, these ski areas are best enjoyed when the snow base exceeds 2m.

One of the best routes is the long intermediate Piste Du Chamois from Sorebos summit that runs all the way down to Grimentz. Also, the only run into Zinal called Aigle piste is worth checking out. Taking it up a notch, you'll want to head up to the Becs de Bosson top station to ride down the long Loma Sup piste descending into Grimentz.

After a long morning of snowboarding, the best option for lunch is the mid-mountain La Marmolada hutte above Zinal (informal but takes reservations). While Grimentz is a quaint village, there is very little apres ski or nightlife to speak of. With that said, you can always check out Le Tele Pherique (Zinal base), Chez Florio (Grimentz base), and then try Country Pub, Domino or Disco Shaddock for some nightlife. There are not many hotels in Grimenz or Zinal, especially near the lift bases. The villages are predominantly vacation rentals and second homes.

To reach the snowboarding at Grimentz Ski Area by air, the closest major airports are Geneva and Bern, which are both about 2.5 hours away. There is also a small airport in Sion.

To reach Grimentz by train, the nearest railway station is in Sierre, which is about 25km away. There is regular Post Bus service from the Sierre train station. The bus trip requires a change of bus in the village of Vissioe, and takes about 75 minutes. If you are planning to explore several Val d'Anniviers ski areas, a good base is the village of Vissioe where all buses interconnect.

PRO TIP: While Sierre is exactly a ski town, it does make a great base for exploring multiple ski areas (if that's important to you). Sierre is a central location for trains, bus and funicular. Sierre is about equidistant time-wise between the lifts at Crans Montana (45 min) or Anzere (40 min) or Val d'Annivers (55 min) or Leukerbad (40 min). And, no surprise, the round trip public transport cost is roughly similar. 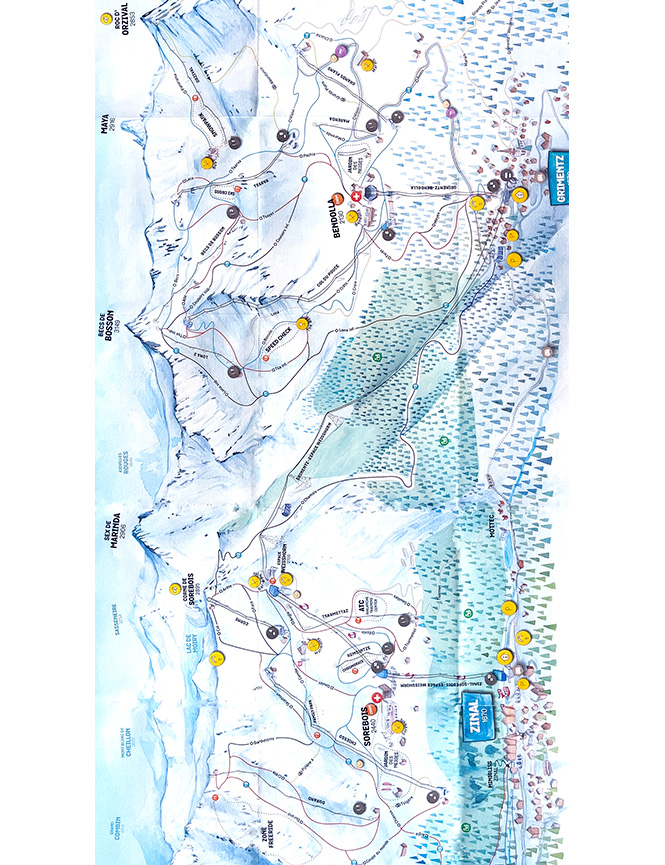