The 10th most popular snowboarding destination in Austria.

Southwest of Salzburg and north of Zell Am See, the Saalbach-Hinterglemm / Leogang-Saalfelden region is the largest interconnected ski area in Austria with 69 lifts serving 270km of pistes accessing 1,070m of vertical. The pistes truly interconnect the towns of Saalbach, Hinterglemm and Leogang, although the lower elevations can make some of the lower slopes alittle crusty or thin. In addition to the vast amount of terrain to explore, this ski region is well-known for it's on-mountain hut system -- there are 40 huts providing traditional meals and apres ski opportunties.

This may not be the place for advanced snowboarders who like to stick to the groomed pistes -- only 15km of the 200km are rated difficult. For solid intermediates, a popular way to explore the groomed pistes is Ski Circus circuit which links all the main areas in a counter-clockwise loop around the Glemm valley. With the excellent lift system and few drag lifts, this is truly a groomers paradise to ride a lot of kilometers.

While the region is not known in the past for backcountry freeriding, there is still plenty of off-piste powder to explore. First, start with the marked off-piste ski routes, such as the Schattberg West from Hintermaisalm or Spieleckkogel from Walleggalm. There are powder bowls to explore in the Seekar, Schattberg and Zwolferkogl areas. If you are looking for glades, try the off-pistes lines on the way down to Leogang. With the addition of the lifts to Fieberbrunn, there is now access to the several off-piste ski routes. Matter of fact, Fieberbrunn is home to an annual Freeride World Tour event.

For freestyle boarders, there are two snowparks. The first is at the base of Hinterglemm called the Nightpark and has three lines ranging in difficulty from beginner to pro. It is lighted at night for evening riding. The second park over in Leogang is called the Nitro Park and has 300m of rails, boxes, jumps and two big airs. It is located off the Asitzmulden lift.

For lunch up on the mountain, try either Pfefferalm mountain hut or the Wiesser Alm for traditional Austria meals. There's also the Alte Schmeide above Leogang and the Rosswald Hutte near the Hockalm lift.

While the Saalbach-Hinterglemm area tends to attract an older crowd, it still has a reputation for it's apres ski scene, though some may think it's a rather tame affair relative to St Anton or Ischgl. In the Hinterglemm area, snowboarders will want to check out Goasstall (make sure to see the goats inside), Hotel Dorf Schmiede, Hexanhausl, and Tanzhimmel. In the Saalbach area, after ripping it up on your board, hit the Hinterhagalm up at the Turm t-bar and then the Bauer's Schi-Alm at the Taum t-bar. For some nightlife, try London Bar in Hinterglemm, the Arena in Saalbach or the Berger's Hotel disco in Saalbach.

The villages of Saalbach and Hinterglemm both lack that authentic Austrian charm that can be found in many of the ski towns. They seem alittle purpose-built and there is no sense of the locals still living there year-round. But, Saalbach is still considered the more charming of the two with more nightlife. Hinterglemm is definitely more family-oriented.

To reach the snowboarding in Saalbach, you'll want to fly into Salzburg. It's worth the connection time. If you want to take the train, head to the Zell Am See station. Then, catch the local bus up to Saalbach, which takes alittle over 30 minutes (there is no train station in Saalbach). Alternately, if you rent a car, from Salzburg head to Saalfeder and then to Maishofen before continuing to Saalbach. In the Saalbach valley, there is a free ski bus running from Jausern in the east to Hochalm in the west, but only from 9am to 5pm.

While there is a train stop in Leogang, it is a hike from the small railway stop to the accomodations and lifts. The actual village of Leogang is about a kilometer or so east of the ski lifts.

Note: You may experience difficulties trying to book hotels for this region online and there may be little info in English. Also, contrary to most European destinations, many tourists here eat early resulting in overcrowded restaurants -- dinner reservations are highly recommended.

Overall, Saalbach-Hinterglemm is the 10th most popular snowboard & freeride destination of all 75 snowboarding resorts in Austria. 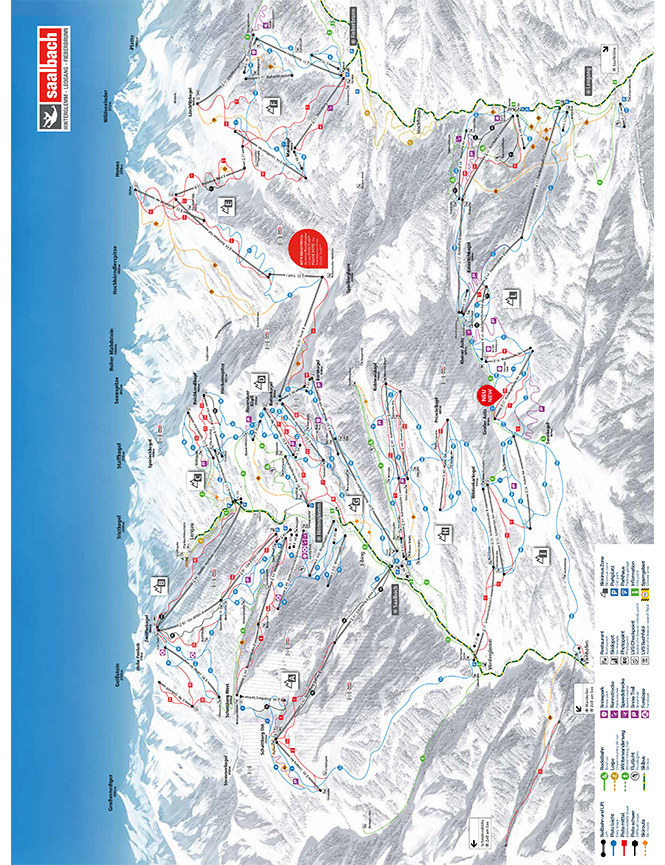