The 11th most popular snowboarding destination in France.

East of Geneva, the Avoriaz Ski Area has 37 lifts providing access to 50 pistes totaling 153km with a maximum vertical drop of 1,466m. The pistes are rated at 55% beginner, 33% intermediate and 12% advanced.

The Avoriaz Ski Area is one of the most popular resorts in France with snowboarders, most likely due to its natural terrain park and the Snowcross Zones, which offer ungroomed slopes. The Stash terrain park has all wood stunts and is located in the dense Lindarets Forest.

Avoriaz is a car-free town perched atop a cliff that is mainly accessible by cable car. Avoriaz is not one of those quaint alpine villages -- it has very modern architecture that has a strange appearance being arranged on top of the plateau.

The latter Les Lindarets section is pretty family friendly and also has some nice off-piste freeriding when theres fresh snow, such as the Snow Cross zone off the Brocheaux lift. If you are heading down to Les Lindarets from the top of the Des Rochassons lift, head under the rope on skiers left to access a steep face for powder turns.

Overall, freeriders in search of powder head over to Les Hauts Forts, especially the skiers left side. There is a natural gully over there that funnels into glade on the way over to Les Prodians.

The only negative about freeriding in Avoriaz is thy the runs tend to be short. Also, keep in mind that there are a lot of unmarked cliffs and rocks just off the marked pistes.

If you are into parks and freestyle, Avoriaz is the place with five parks. The Chapelle terrain park near the Procluo lift is by far the most popular.

The Avoriaz Ski Area is part of the Portes du Soleil ski domain, and is known for the best snow conditions due to its high base elevation. TThe Portes du Soleil ski domain is one of the largest in the world linking 14 villages on both sides of the Swiss-French border southeast Geneva. The very family-friendly Portes du Soleil encompasses 206 lifts serving 283 pistes totalling 650km over 400 hectares of terrain. The pistes are classified as 41 green, 104 blue, 110 red and 28 black. From a snowboarders perspective, the classifications at Portes du Soleil can be translated as green means walking, blue means occasional walking, red means intermediate and black means difficult. In addition to the groomed pistes, there is plenty of off-piste terrain to explore under craggy peaks and down steep couloirs. Keep in mind that there are plenty of t-bars and Poma platter lifts spread throughout the region, along with flat or rolling traverses between ski areas. Overall, you are not going to find many snowboarders here, maybe 15%, except up at Avoriaz. By the way, Avoriaz makes for a great central and high elevation base to explore the entire Portes du Soleil region and it has exceptional terrain in every direction. Since the region tends to be lower in elevation, snow depth can be a problem throughout. If the quoted minimum depth is less than 60cm (24 inches), the off-piste routes are pretty sketchy to explore and you will be stuck on the icy groomed pistes. There can be some inconsistencies in published snow reports, such as centimeters reported as inches, so make sure to check several snow report sources before coming.

If you are looking for some nightlife in Avoriaz, check out The Place, then head to Shooters and finish at Le Choucas.

To reach the Avoriaz Ski Area, you will need to head to Morzine and then either drive up the plateau to the outskirts of the town, or park in Morzine and take the cable car up to Avoriaz. Either way, it can be a 2 hour transfer from Morzine in high season.

If you are arriving by air, the nearest airport is Geneva, which is about 65km from Morzine. There is regular bus service from Geneva to Morzine

If you are arriving by train, the Cluses train station and the Thonon-les-Bains trail station are each about 30km from Morzine and both have high speed TGV trains. 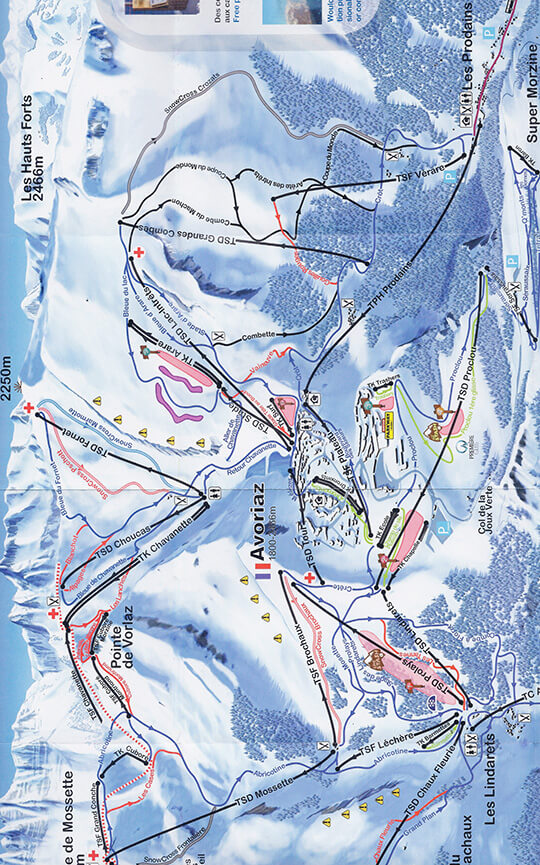