The 21st most popular snowboarding destination in Austria.

Southeast of Innsbruck and southwest of Mayrhofen, the region between Tux and Hintertux offers a wide range of pistes and glacial runs to explore by snowboard. There are two separate base areas in Hintertux and Tux that are only connected via ski bus. Overall, the region has 30 pistes served by 13 lifts accessing 225km of pistes with a practical maximum vertical drop of 1,200m.

Hintertux is popular for all of its off-piste ski routes. There is one set of ski routes that are adjacent to the Lamstange lift including Pistes #2, #13 and #13A. In addition, there is the infamous Ski Route #1 called the Schwarze Pfanne that runs from the Tuxerjoch Haus down to the Hintertux base area.

In addition to the pistes, the freestyle snowboarders in your crew will enjoy Hintertux terrain park, which is located up on the glacier. Called BetterPark, it is served by the Olperer t-bar lift. There is year-round lift access to the glacier snowboarding.

After a morning of shredding, there are two good mountain huts for lunch called the Gletscherhutte and the Tuxer Joch Haus.

At the end of a long day of snowboarding, try apres ski haunts like the Spannaglehaus and then head to Hohenhaus. For some nightlife, check out Tux 1 and Batzen Keller Tenne.

To reach the snowboarding in Hintertux, take the train from Innsbruck or Munich to Jenbach. Then, transfer to the Zillertalbahn to head up the valley to Mayrhofen. From Mayrhofen, take the local bus up to Hintertux (about 1 hour).

PRO TIP: Hintertux offers a combo ski pass for the ski area above Landersbach to Mayrhofen. There is a convenient Post Bus that runs the valley and provides reasonable quick bus-interconnect to the other lift base stations. 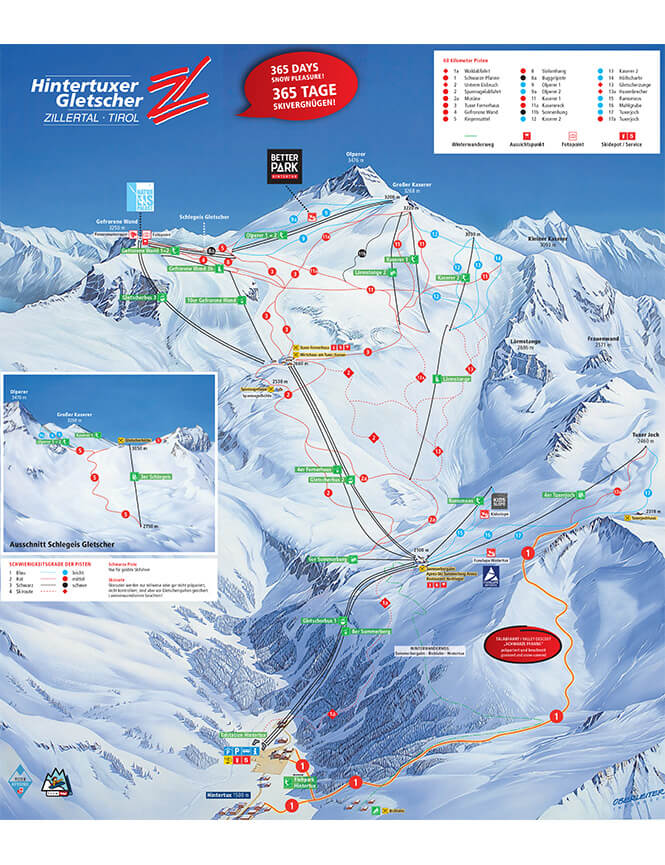