The 10th most popular snowboarding destination in Italy.

North of Venice and southeast of Bolzano, the Val Gardena ski region is in the spectacular heart of the Dolomites. Surrounding the Sella Massif, the ski region has 70 pistes totalling 176km that are served by 53 chairlifts (plus 25 drags) which access a maximum vertical descent of 1458m. The lifts system interconnects several villages including Ortisei, Val Gardena, Alta Badia, Arabba and Canazei. Overall, the pistes surrounding the Sella Groupo are generally known for it gentle pistes ideal for beginners and intermediates. With all the flat runs, make sure to look ahead when snowboarding or you'll be walking!

A challenging ski route in the region is the Sella Ronda circuit, which is a 40km loop around the Sella massif that links Val Gardena with Val di Fassa and Arabba. The Sella Ronde can be snowboarded in either the clockwise or counter-clockwise direction. For some powder and glades, check out Mont Se Seura. If you get over into the Alta Badia area of the Sellas, the Val di Mezdi route is a classic off-piste line that is best done with a guide. It begins at the Bambergerhutte refugio, which is above the Sass Pordoi cablecar top station. On the way down, it runs several couloirs on the approach to the village of Colfosco.

For the freestyle snowboarders in your crew, the Val Gardena ski area has the Gran Paradiso terrain park to session. It is located above Plan de Gralba.

The Val Gardena ski center is also popular for its on-mountain huts. For lunch, try the Rifugio Emilo Comici in the Plan de Gralba area.

If you are looking for some apres ski action, try the Piz Secteur in Plan de Gralba, Apreski Snowbar on Ruacia in Santa Cristina, or back in Selva head to La Stua. For nightlife, check out the Kronstube, Cafe Saltos, Luislkeller, Dali Disco or the Sun Valley Discoteque.

Within the Val Gardena proper, there are three main villages including Selva Gardena (Wolken Stein in Groden), Santa Cristina and Ortisei (St Ulrich), which is the largest but furtherest away from the majority of the lifts. The village of Selva Gardena provides the best lift access.

To reach the snowboarding in Val Gardena from Milan, head east on A4/E64. In Brescia, turn north on Route 5545. In Trento, follow Route A22 north and then turn east on Route S548 into Val Gardena.

To reach Val Gardena from Balzano, there is a regular bus. 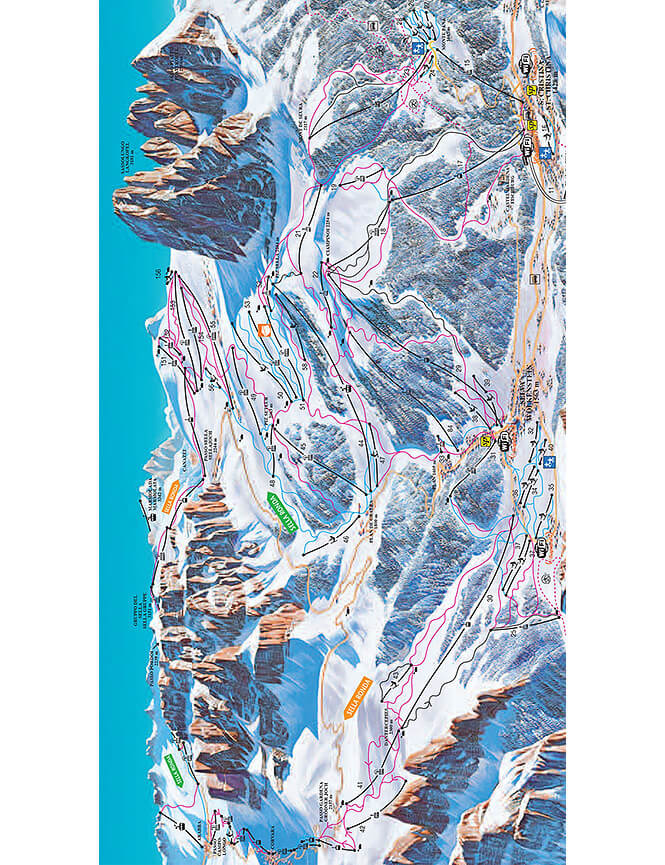