The 20th most popular snowboarding destination in Austria.

Southeast of Innsbruck and south of Jenbach at the head of the Zillertal, the town of Mayrhofen provides direct access to two ski areas on either side of the valley. The Penkenbahn in the center of town heads west up to the larger ski area; most people also use this gondola for downloading at the end of the day. The Ahornbahn on the south edge of town heads south up to a smaller, more gentle ski area perfect for families. Combined, they total 133km of pistes served by 23 lifts with a maximum vertical descent of 1870m. While the maximum descent may be 1870m, you may end up doing that only once a day, so the effective maximum descend is more on the order of 1400m. Overall, both areas are ideal for beginners and intermediates, but expect to find long lift lines.

Mayrhofen is typically not known by snowboarders for advanced terrain. The only exception is super steep Harakiri piste down to Hornbergtal, which is considered Austria's steepest, or the lines off the Tux150 lift down the Penken face. But, luckily, it is part of the Zillertal Arena so you'll have access to the ski areas further up at Hintertux (30m bus) and down valley at Zell Am Ziller (train/bus). In a big snow year at Mayrhofen, try the ski route from Rast Kogel down to Eggalm in Finkenberg, or try Ski Route #30 from the Penkenbahn summit station down to Hippach at the Horbergbahn base. There are also two other ski routes to explore including #13 on Horberg and #69 on Rastkogel.

For the freestyle snowboarders in your crew, the main snowpark is the Vans Penken Park accessed off the Sun-Jet lift (1820m). It has three lines of kickers and rails to session ranging from intermediate to pro-level.

After a morning of shredding, head up the Schneekar lift to the top of Horberg and check out the Schneekar hutte for lunch. The best apres ski action can be found at the Ice Bar near the Penken Gondola base (Europop and table dancing) or the Speak Easy Arena at Hotel Strass. For some late nightlife, try the Schlusselalm Disco and Scotland Yard Pub (aka Scotties). Whether at apres or later, stop by the Bruck'n Stadl at the Ahorn base.

If you are looking for a traditional Austrian meal, try the Wirtshaus Zum Griena. It is a 400+ year old farmhouse. Alternately, head over to Tiroler Stub'n, which is owned by local snowboarder Thomas Eberharter.

To reach the snowboarding in Mayrhofen by train from Innsbruck or Munich, head to the Jenbach station. Then, transfer to the Zillertalbahn to head up the Zillertal to Mayrhofen. 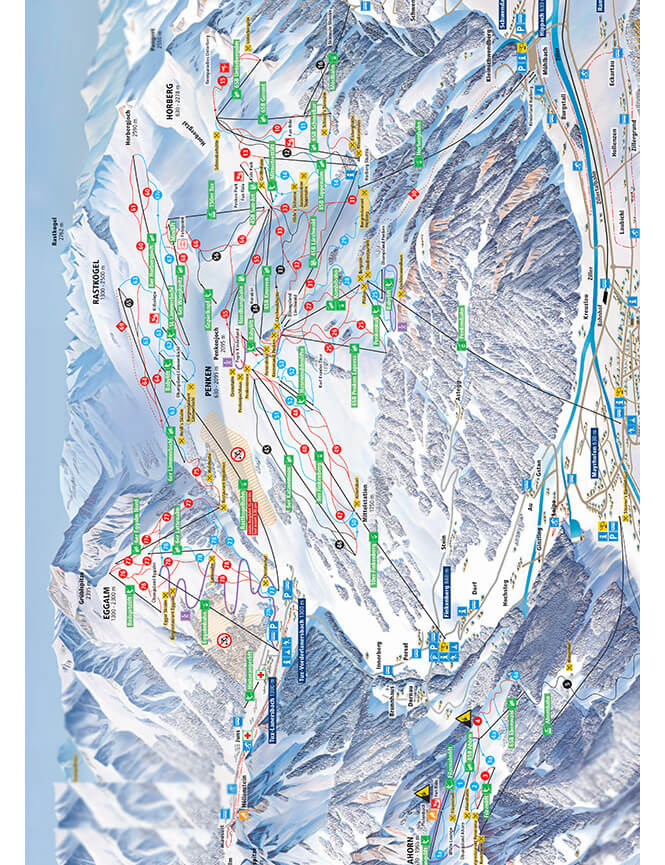