The 16th most popular snowboarding destination in Austria.

Southwest of Innsbruck and Neustift, the Stubaier Gletscher ski area has 35 pistes totaling 75km spread over 1,450 hectares that are served by 26 lifts with a maximum vertical descent of 1,450m. Spread across the largest glacier in Austria, this ski area also offers extensive off-piste freeriding, including 10 ski routes and 14 freeride snowboard routes totaling 29km. The new 3S Eisgratbahn gondola from the base runs parallel to the old Gamsgarten lift to the mid-station and above - it heads up 1,200m of vertical in 11 minutes in the comfort of a 24 person gondola with heated leather seats and wifi. While this does make getting to the mid-station pretty quick and comfortable, you'll still find that most of your day is spent riding lines above the mid-station so most laps will be about 900m of effective vertical instead of the maximum quote vertical of 1,450m. If you are coming in here in December or January, you should know that the sun barely hits these north-facing slopes during the day.

If there are any freestylers in your crew, there is a terrain park called Snowpark Stubai Zoo which is located on the Gaisskaferner mountain.

The ski areas covered by the pass are Stubaier Gletscher, Schlick 2000, Neustift Elfer 11 and Serlesbahn.

There are 10 marked ungroomed ski routes spread across the ski area. One of the newer hardcore ski routes is the Bildstockljoch Ski Route that runs 1.1km from the Wildspitz mountain station back down to Piste #1 (Eisjochferner). While the maximum vertical descent is 1,450m if you follow the ski route all the way down, it is more likely that you'll be riding a maximum vertical of around 850m. The other new ski route is the Fernau Ski Route runing 3.8km from Fernau Mittelstation down to the Mutterberg Station. But, keep in mind, that whether ski route or freeride route, this ski area really needs about a 2m snow base for any of these to really open up for riding.

Freeride Route #1 (Freeride Zoo) starts at the Pfaffengrat lift top station and quickly runs down to the Fernau top station. While its not a particularly long off-piste route, it offers a great into to riders that are new to the backcountry. There are some mini-cliffs that some riders like to jib over so watch out for the avalanche conditions.

Freeride Route #2 (Highway) begins at the Rotadl lift top station and flows back to the Rotadl base. There are actually two routes on the north side of the lift that are pretty steep approaching 40 degrees.

Freeride Route #3 (Panorama) starts from the summit of the Daunjoch lift and floats back down to the Daujoch lift base. As the name states, there are amazing views of the entire ski area. It's a good early morning intro to freeriding in Stubaier Gletscher.

Freeride Route #5 (Fernau Xpress) starts at the Eisjoch t-bar lift top station and flows diagonally to the base of the Fernau t-bar base station. It rolls over wide open slopes across the glaciers. Just keep an eye out for glacial crevasses and practice glacial terrain safety measures. The wide open slopes turn sketchy near the end of the route before the Fernau base.

Freeride Route #6 (Gamsgrat) begins at the Gamsgarten top station and follows the north line back down to the base station. While its not a long run, it does have a few cliff drops near the end.

Freeride Route #7 (L'Utimo) starts near Dresdnerhutte just above the Fernau mid-station and runs roughly along the 3S Eisgrat lift line back down to the Eisgrat bottom station. It is a very long off-piste route that is very sketchy. There is very high avalanche risk, so make sure to check the conditions first.

Freeride Route #9 (Direttissima) begins at the Murmelebahn lift summit and traverses all the way down to the 3S Eisgrat lift base station through remote off-piste terrain. It runs parallel to the Wilde Grub'n ski route in a narrow valley on wide slopes.

Freeride Route #10 (The Wall) starts at the summit of the Fernau lift and runs down to the Fernau middle station. It starts a little mellow and then descends through steep 40 degree slopes near the finish in avalanche terrain.

Freeride Route #12 (Hidden Valley) begins at the top of the Kitzlift near the Gamsgarten top station and then flows back to the Gamsgarten base station. It usually requires about a 10 minute hike to get to the start of this hidden route.

Freeride Route #13 (Cannonball) starts at the Eisgrat top station and follows a challenging line north of the 3S Eisgrat lift line on the way back down to the Fernau middle station. There is a very steep channel with plenty of rocks.

Freeride Route #14 (The Wildspitz) begins at the summit of the Daunferner lift and runs to the 3S Eisgrat top station. This is a very, very steep route with 45 degree slopes. This is for experts only since falling is not an option. If the entrance looks to hairy for you, there is an alternative bypass on ski route Bildstockjoch.

After a long morning of shredding, try checking out the on-mountain Jochdohle or Dresdner Hutte for lunch.

When you're ready for some apres ski action, try the Gamsgarten Bar or Eissee Snow Bar or Rossini. For nightlife, head to the Dorf Pub in Neustift or Down Town Pub, then on to Nachkastl or Scala Club or Club Reverze.

About two-thirds of the way up the Stubaital, the village of Neustift is a traditional Tirolean village and makes a great base, especially if you'd like to check out the other ski areas in the valley. Plus, there's great rodeln accessible right from town.

To reach the snowboarding at Stubaier Gletscher by air, fly into Innsbruck international airport (INN). There is a quick public bus from the airport through downtown to the Innsbruck main train station, if necessary. While the Stubaier Gletscher is about a 45 minute drive from Innsbruck, most of the accommodations are located about 20km prior to reaching the ski area and some of the hotels offer a free shuttle bus from the airport. From the Innsbruck main train station, there are regular public Regio Stubai bus #590 every 30 minutes (except at lunch) that runs up the Stubaital valley all the way to to Stubaier Gletscher ski area. Also, within the Stubaital, there is a free ski bus that runs from Schonberg up to the Mutterberg Station at the ski area base. 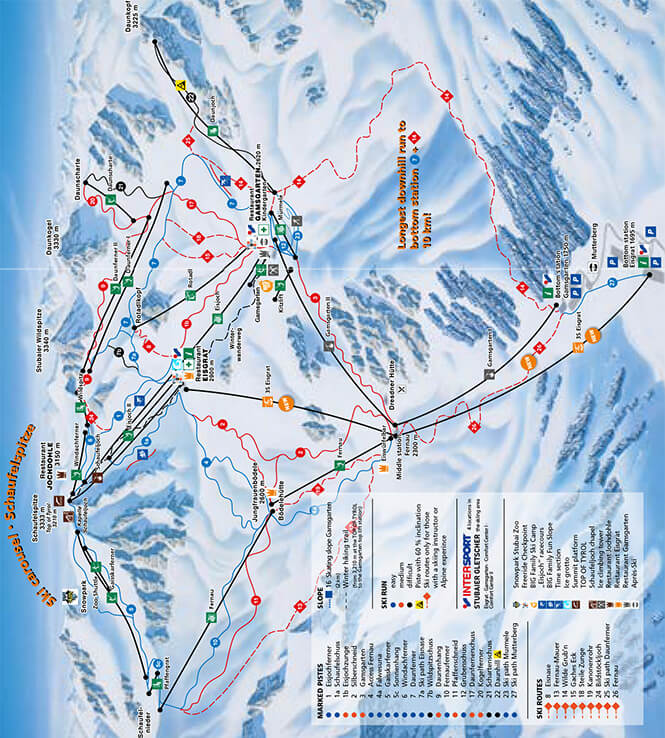