The 27th most popular snowboarding destination in Austria.

South of Salzburg and Bischofshofen, the Salzburger Sportwelt ski region has 200km of pistes intereconnecting 6 villages spread across five valleys. Separated by 15km, the lift system connects Alpendorf, Wagrain, Kleinarl, Flachau, Flachauwinkl and Zauchensee. Traditionally, it was divided into a northern and southern sector, but now there are lifts connecting the sectors including the horizontal traversing 3km Panorama Link. Overall, a majority of the pistes are at relatively low elevations and really need a good snow season to enjoy to the fullest.

The family-friendly Salzburger Sportwelt is known as an intermediates paradise with limited off-piste freeriding or glades to explore. For freeriders, the best options are accessible from Flachauwinkl over in the Zauchensee zone. Alternately, head to the Sonntagkogel peak and hike to the backside for a line down to the Sonntagskogel 1/2 lift base. Also, from the Gernkogel top station, there is a ski route that appears to start off pretty flat before it drops. As for glades, head to the top of the Griessenkareck and ride towards Moadorfll-Wagrain where you can look for legal lines into the trees off to the sides. Sadly, most tree riding is forbidden and there are plenty of roped off areas. On the way to Wagrain, you'll come across a short ski-route starting from the gondola mid-station.

If you're looking for a way to explore the entire Salzburger Sportwelt, try the 12 Peaks Trophy tour. It loops through all the villages while crossing 12 peaks and 5 valleys. There are 30 lifts accessing 21 runs for a total of 46km. Just make sure to start at first chair and plan to be finishing just as the lifts stop spinning for the day.

For the freestyle snowboarders in your crew, the Salzburger Sportwelt has several terrain parks to session. The main terrain park, Absolute Park, is located in Flachauwinkl at Shuttleberg Flachauwinkl Kleinarl. It extends over 1.5km with a halfpipe, jib line, rails and kickers. Along with Burton The Stash, there are over 80 stunts to test your skills in the Flachauwinkl area. Above Flachau, the smaller Alpendorf Betterpark is located between Wagrain and Alpendorf below Hirschkogel Peak. There is usually a pro level 22m kicker along with more moderate 14m kickers and plenty of rails.

After a long day of shredding, you can try the apres ski action up on the mountain at Auhofalm or at Griesenkareck. Next, you'll want to head to Yeti's party house in Lacknerhof Hotel or to Kuhstall at the Flying Mozart. The real nightlife kicks off at Musicstadl in the Flachauer Gutshof, or you can head over to the Downtown Bar.

To reach the Salzburger Sportwelt snowboarding from Salzburg, follow A10/E55 south for about 40+km. While some of the better snowboarding is more quickly accessible from Flachauwinkl, there is more evening action in Flachau.

To reach the ski region by train from Salzburg, the nearest train stations are St Johann im Pongau or Schwarzach-St Veit where you'll need to catch a bus to Alpendorf or a little further to Wagrain.

PRO TIP: When staying a week, look into the Ski Amede regional ski pass. It includes SportWelt, Hoch Koenig, Schladming, and Gastien ski resorts, which are interconnected by ski buses.

Overall, Salzburger Sportwelt is the 27th most popular snowboard & freeride destination of all 79 snowboarding resorts in Austria. 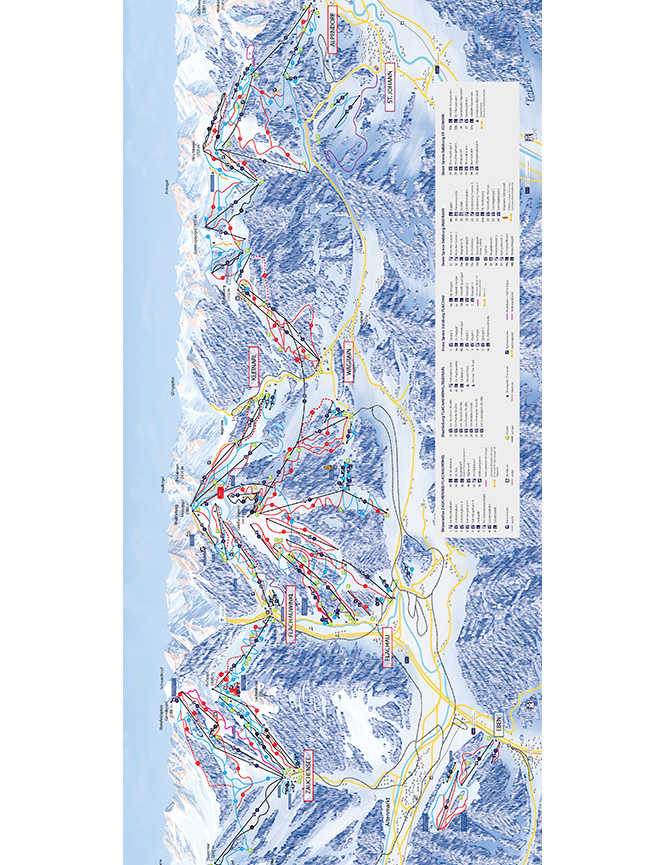