The 11th most popular snowboarding destination in Switzerland.

Located in the eastern Swiss canton of Graubünden (aka Grisons), the Davos Klosters ski region consists of six ski areas in the Rhaetian Alps spread along the Landwasser valley. Lining both sides of the Landwasser valley the six ski areas include: Parsenn Gotschna, Jakobshorn, Madrisa, Rinerhorn, Schatzalp-Strela and Pischa. Overall, there are 110 pistes totaling 318km that are served by 55 lifts (27 drag lifts) with a maximum vertical descent of 2,030m. The Parsenn Gotschna ski area is the largest and most accessible from both Davos and Klosters, Jacobshorn is popular for its freestyle options, and Rinerhorn is known for its off-piste freeriding. The Davos Klosters ski region is infamous for all of the off-piste freeriding opportunties. Many hardcore snowboarders feel that the Davos Klosters region would be ideal to spend an entire snow season.

Heading right out of Davos Dorf and Klosters Platz, the popular Parsenn Gotschna ski area is the main ski area of the Davos region. This massive ski area spreads over the Alps to directly interconnect with the villages of Davos & Klosters. It's known for big descents and also a 12km pistes running from the Weissfluhjoch all the way down to the remote village of Klubis on the train line back to the Kloster lift. From either base town, it's a production to get up to the ski areas each morning. From Davos Dorf, it requires 2 funiculars to reach summit station at Weissfluhjoch (train connect literally in same room so watch where you're going). And from Klosters Plaz, takes 2 cable cars to reach summit station at Gotchnagrat. So, with 40+ minutes to get back to the top, you'll probably not do a bottom run (1800m) except at the end of the day. Therefore, the typical practical vertical during the day is 1100m.

The Parsenn ski area may not have massive off-piste freeriding lines, but there are plenty of side-country freeride lines to explore off almost every lift. There are two short designated ski routes including Ski Route #8 off Weissfluhgipfel to the Haupterfali t-bar and the Ski Route #9 to Arosa. At Parsenn-Gotschna, there are extensive off-piste lines, but beware of small avalanche paths above you which can still have big slides even five days after last snowfall. The real backcountry line for splitboarders is that Ski Route #9 off the Weissfluhgipfel leading northwest through sketchy avalanche terrain to Arosa (guide recommended and it then takes 2 trains to get back). Also, look for the off-piste routes leading to Fideris or Jenaz.

In addition to the off-piste lines, there are some interesting deadend runs that you should be aware of. For example, both the #13 and #16 black pistes descend from the bottom lift stations down to Wolfgang, where you need to take a bus back to either Davos or Klosters. In addition, on the Kosters side, there are pistes from Schifer to either Kublis (#56) or Serneus (#53) which require a long walk to a bus to return to Klosters. Matter of fact, the 14km route from Weissfluhjoch down to Klubis descend 2000m. Lastly, there is a red piste (#49) from Schwarzeealp leading down to Seifranga on the edge of Klosters.

Davos Parsenn Gotchna ski area has an unusual mountain layout that takes a while to get used to. It doesn't help that they have most likely the worst piste map in the Alps considering the size of the ski area. The map is only about 5 by 7 inches for a place with 16 lifts spread across 20 km. There are many confusing lift and piste intersections that don't show on the small map. Inevitably, you'll end up committing down the wrong run at some point. Unfortunately, the map also doesn't do justice so some amazing pistes, which aren't drawn correctly on the small resolution. For example, from the map it's hard to realized that from the Weissfluhgifel summit down Piste #1 and #24 descends almost 1300m, let alone if you continue on to Küblus or Serneus for another 600m (both require a hike out to the bus or train).

After a long morning of ripping it up, you can find good on-mountain dining at the Chesetta Hutte off Piste #24 or Berghaus Alte Schwendl. Noteworthy, the valley village restaurants in this region are particularly disappointing especially compared to neighboring Tirol and Süd-Tirol. Their menus tend to have limited variety and are very pricey. The exception tend to be the lone Italian pizza/pasta restaurant. Luckily, mountain hüttes tend to be very good with traditional specialties at more reasonable prices. So plan on enjoying long late lunches up on the mountain.

If you do stay in Davos and are looking for some apres ski action, then check out the Postli Club, the Cabanna Club, the Ex-bar or the Piano Bar. In Klosters, stop at the Grastrochni umbrella bar on the final piste just before the Gotschnabahn cable car base area. Apres ski is a very tame affair and can be kind of hit-or-miss. Of course, it's best on the weekend evenings, but that's still not saying much.

To reach the snowboarding in Davos from Zurich, the best bet is by train. It's a 2.5 hour ride with a single transfer in Landquart. This is the same train line that also services St Moritz, which is 30 minutes further along the line. If you are coming from the airport and don't want to use the trains, you can always use the Davos Express transfer bus service.? 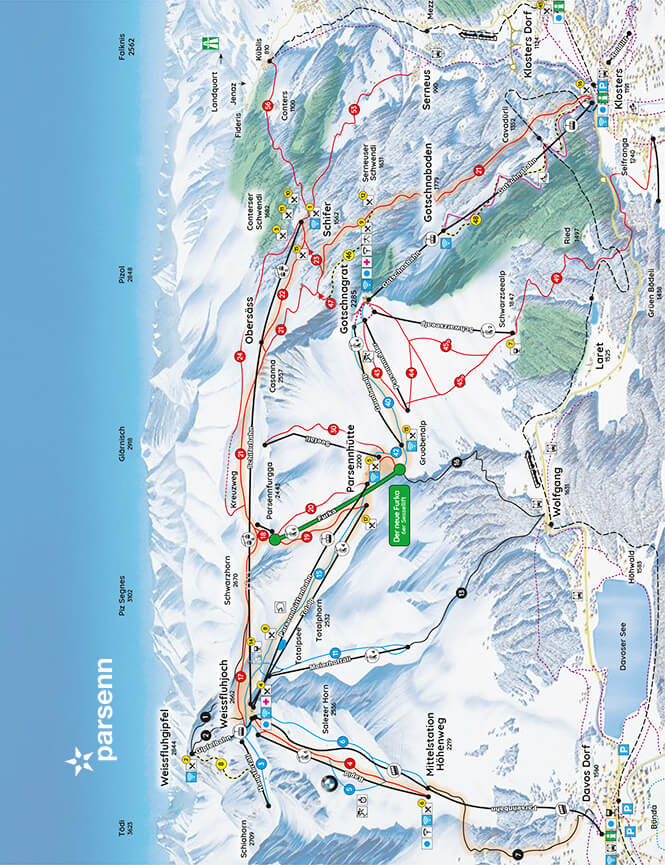