The 37th most popular snowboarding destination in Switzerland.

South of Zurich and northeast of Brig in the Valais region, the Aletsch Arena ski area has 73 pistes totaling 104km that are served by 19 lifts with a maximum descent of 650m. Known to be uncrowded, this family-friendly ski area is popular with beginner and intermediate snowboarders. With that said, there aren't very many snowboarders to be found here since it has numerous challenging traverses. The best Aletsch Arena snowboarding is normally found during the months of February and March when there is better chance for a deeper snow base.

The ski area is spread wide across the south facing side of ridges above the spectacular Aletsch Glacier. While there are plenty of beginner and intermediate pistes, there is limited advanced terrain. Luckily, there's plenty of off-piste sidecountry for snowboarders to explore but it takes a minimum 2m snow base to really enjoy. The sunny south facing terrain is known to melt out pretty fast and becomes ice-packed without recent fresh snow. If it hasn't snowed in over a week, the sun-crusted snowpack becomes treacherously icy even for advanced riders. The ski area even starts to close some of the uppermost black pistes.

Situated on an alpine shelf well above the Rhone River valley, the Aletsch Arena links the car-free resorts of Bettmeralp, Fiescherlap, and Riederalp. There is good train access on the valley floor, and then the three valley villages have lifts up to the resort base villages on the plateau at 2,000m. There's only one infrequently used piste that actually descends from the plateau shelf down to the valley floor at Fiesch, so plan to up-lift and down-lift from the train stations up to the car-free base towns above the valley.

The village of BettmerAlp is the ideal base for exploring Aletsch Arena. It is located mid-mountain and is only accessible in the winter by two cable car systems, so it is naturally car-free. The charming "streets" are snow-covered pedestrian walkways that are shared with skiers and snowboarders passing through town. The only mechanized transport are the threaded over-snow "taxis" and the nightly walkway groomers. Bettmeralp is located east of the Röschtigraben (rosti line) in the German-speaking side of Switzerland. If you are looking for easy access, Hotel Waldhaus was one of the first in BettmerAlp and is conveniently located next to the cable cars. You can ski out the door down to the lift base. While it has a new addition for comfort, most of the rooms are older and smaller but well cared for. The friendly German-speaking staff is very attentive, but they don't speak much English if that's important to you. Since there are very few dinner restaurants in the village, make sure to get half-board included at the hotel. Hotel Waldhaus has an excellent restaurant with a local authentic menu.

If you are looking for a grand tour of the ski area, try the Glacier Panorama Tour. This 28.6km signposted circuit combines the best slopes and vistas throughout Aletsch Arena.

One of the best Aletsch snowboarding runs is the 12km piste from Eggishorn. In addition, when the snow is deep enough, it is possible to combine groomed and off-piste lines all the way down to the valley floor at Fiesch, thus skipping the down lift on the cable cars. For advanced snowboarders, the better lines are off Bettmerhorn and Eggishorn, such as Ski Route #87 and the double black #70, respectively.

For the freestyle snowboarders in your crew, Aletsch Arena has three terrain parks to session. The TFI Snowpark has kicker and rail lines along with a halfpipe. It is situated above Bettmeralp on the Kanzel/Salzgab piste. The Funpark Konkordia has banks, rollers and jump. It is situated above Fieschalp. The Funpark Eggishorn is located on the Konkordia piste, and has both rails and jumps. After a morning of Aletsch Arena snowboarding, grab an on-mountain lunch at either Berghutte Heidis Hutte above Fiesch or the centrally located Berghutte Horli-Hitta. There is minimal apres ski action which is pretty much done by 5pm.

As you might expect with a very family-friendly ski area, there really isn't much of an apres ski scene. The little apres ski you may find is normally over by 5pm. And, don't even think about nightlife.

To reach the snowboarding in the Aletsch Arena by air, the best bet is to fly into Geneva Airport (GVH). There is a direct train from the airport to Brig, which is about 10km away. From Brig, there is a regional train providing access to the valley villages of Morel, Betten and Fiesch. From those valley train stations, there are cable car or gondola lifts up to the base villages on the plateau of Riederalp, Bettmeralp and Fiescheralp, respectively, which transport luggage, too. The Betten Talstation train station has convenient cable cars inside the building providing direct access up to Bettmeralp. Similarly, the Fiesch train station also has quick access to the gondola up to Fiescheralp. 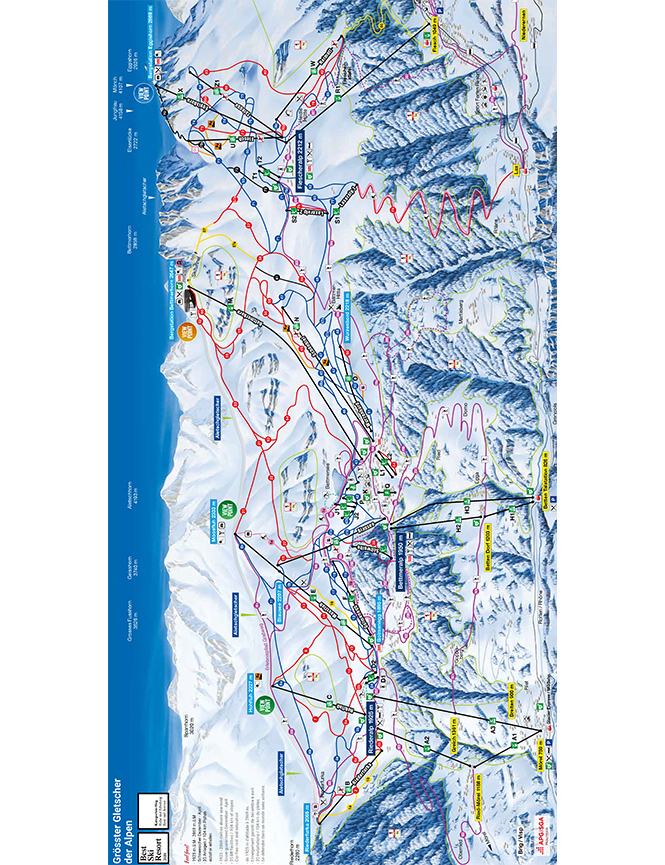