The 41st most popular snowboarding destination in Switzerland.

Southeast of Zurich and south of Chur in the Graubunden region, the Lenzerheide ski area has become a true freeriders paradise. It has 155km of pistes served by 25 lifts accessing 1365m of descent, along with plenty of off-piste lines to explore. Lenzerheide is spread across both the east and west sides of the valley, and its groomed pistes are rated about 40% intermediate and 15% advanced. While it has a maximum descent of 1365m, it will be more typical to do descents of 950m or less.

To make it even more enticing for snowboarders, there is now a traverse gondola interconnecting Lenzerheide with the slopes at Arosa to the northeast. This newer connection from Parpaner Rothorn to Arosa Hornli opens up the expansive snowboarding lines above Arosa. Of course, there is still the lift connection to Churwalden, the next town north of Lenzerhiede.

In terms of freeriding, keep in mind that there aren't many marked ungroomed ski routes at Lenzerheide. The best freeride options are from Parpan Schwarzhorn and off Parpan Rothorn. The couloirs off Rothorn are known to be narrow, steep and rocky. If you are experienced and looking to go further off-piste, there are two popular guided backcountry trous including the Safari Tour and the Sonnaspans Tour from Rothhorn summit leading all the way back down to Lenzerhiede. The Arosa-Lenzerheide Ski Safari isn't like other resort ski safaris which just tour the groomed trails. The Arosa-Lenzerheide Ski Safari is an off-piste route from the Rothorn summit above Lenzerheide that descents to Arosa and then down to the quaint village of Tschiertschen. Overall, this ungroomed, unmarked route descends 3000m of deep snow lines. Starting from the Rothorn summit, the first section is a 1000m off-piste descent down to the Hornli Express lift bottom station. After ascending the Hornli Express and then traversing the Urdenbahn cable car, head north on the long off-piste 1200m descent to Tschiertschen. Next, use the Gürgaletsch lift to head back up before the final off-piste descent to either Churwalden or Parpan.

For a typical lunch up on the mountain, you're best bets are at ACLA Grischuna or the June Hutte. After a long day of snowboarding at Lenzerheide, don't get too excited about the apres ski action or nightlife. With no central base area or village, there are limited places for apres ski and late night partying. But, with that said, the best apres ski options are up on the mountain at the Wannerbar and then the Freeride Bar.

To reach Lenzerheide from Zurich by train, take the hourly train south from the main Zurich train station to Chur. In Chur, there is also an hourly bus heading south to Lenzerheide. Keep in mind that there really isn't a central base area nor a charming, authentic town centre.

Note: It really doesn't take much wind to close the upper lifts for the day. Watch the weather if you're planning to head across to Arosa and want to make it back in the same day. 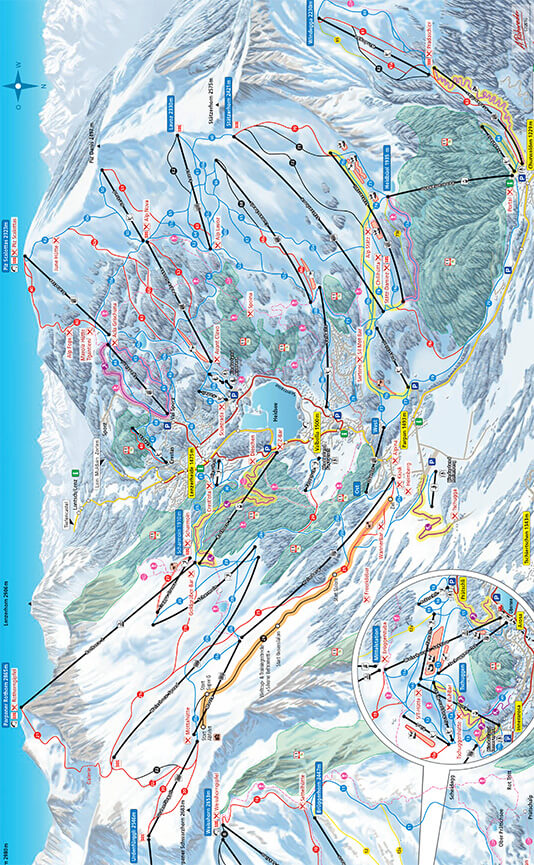