The 16th most popular snowboarding destination in Italy.

West of Turin, the Sestriere ski area has 58 pistes served by 19 lifts with a maximum descent of 1500m. It is known as a family-friendly intermediate groomer paradise and makes a great base for exploring adjacent lift-connected ski areas. Even with the limited advanced terrain around Sestriere, there is challenging off-piste and heli-ski opportunities for expert snowboarders with avalanche awareness training.

The Sestriere ski area is typically divided into two sectors including Monte Sises and Monte Motta. The Monte Sises sector is directly above town, and the Monte Motta sector is on the other side of town leading to the interconnect with Borgata towards the east. While it is situated at a high elevation, there still is low natural seasonal snowfall, so you should expect to encounter a deep artificial snowpack. The best Sestriere snowboarding can be found during from the months of January to March.

The Sestriere ski domaine is part of the massive Vialattea ski arena. The Vialattea consists of several lift-interconnected ski domaines including Sestriere, Pragelato, Sauze d'Oulx, Sansicario, Cesana, Calviere and Montgenevre in France. Overall, Vialattea offers 238 pistes served by 70 lifts accessing a maximum vertical descent of 1500m. One way to explore the entire Vialattea is by following the 70km Giro Della Vialattea ski safari route that loops through all of the ski domaines in the ski arena.

Also known as the Milky Way ski arena, Vialattea is typically pretty quiet on the weekdays and slammed on the weekends with day trippers coming up from Turin. While it is recommended to snowboard here on the weekdays to avoid long lift lines and crowded slopes, the apres ski scene is absolutely dead. So, if you're looking for a party scene, you'll want to include at least a Friday or Saturday evening.

While Sestriere is a centrally located and high elevation base village, it is important to know it is a purpose-built resort with high-rise hotels that lacks the European charm and quaintness you may be expecting. Also, many visitors feel that the hotel ratings here tend to be a little inflated so adjust your expectations accordingly. Some snowboarders will stay in adjacent villages like Pragelato or Sauze d'Oulx and leverage the lift-interconnects to explore the Sestriere ski domaine.

After a long day of snowboarding at Sestriere, the best option for apres ski is at Du Col or Pinkys. For some nightlife, you'll want to check out Al Kovo, the Irish Igloo and then head to Tabata nightclub late night. The weekday scene is pretty low key and the weekends are slammed. 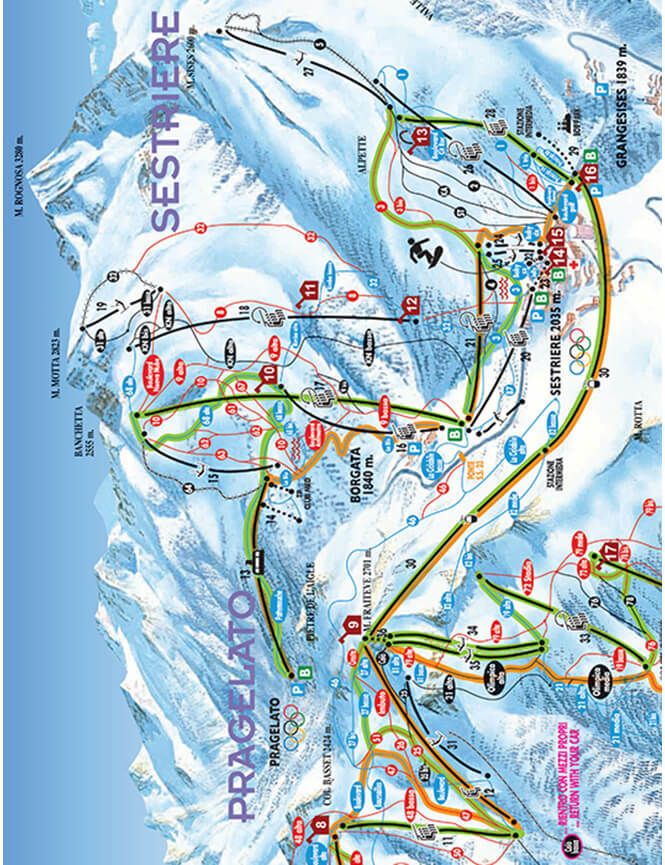