The 34th most popular snowboarding destination in France.

Southeast of Grenoble near Bourg d'Oisans, the Alpe d'Huez ski domaine has 185km of piste served by 81 lifts with a maximum vertical descent of 1,920m (6,300 feet). Alpe d'Huez is known by snowboarders for its extensive and varied slopes that are mostly above the treeline. The village of Alpe d'Huez is a modern, planned resort town on the Grand Rousses Massif. There are numerous south facing ski slopes that can be affected by sunny days and requires good snow coverage.

If you are looking for some challenge, try the steeps under the Pic Blanc cable car. Also from the Pic Blanc summit, there are exceptionally long descents down to the remote villages of La Villette (2035m), to L'Enversin d'Oz (2205m), and the 15km route down through Gorges de Sarenne (1820m).

When you're geared up to head off-piste, there are several good choices. First, start by trying either side of the Sarenne piste. Next, the Grand Sablat piste drops 2,000m down the east face of Massif des Grandes Rousses. Finally, if you don't mind a little hike, start from the Pic Blanc summit and hike 40 minutes to the Col de La Pyramide for a 2,000m descent to the Vaujany pistes.

After a long morning of shredding at Alpe-d'Heuz Grand Domaine Ski, there are a couple good on-mountain huts including the Combe Hut at the base of the Chalvet lift and the Airelles Hut at Mont Frais. The Chalet du Lac Besson is more remote, but worth it for a memorable lunch.

When you are ready for some apres ski action, you can check out the Folie Douce, the Free Ride Cafe and the Underground. And, for nightlife, you'll want to head over to the Crowded House or the Igloo.

If the Alpe d'Huez ski domaine doesn't offer enough snowboarding for you, the six day pass includes a couple days at nearby Les Deux Alpes ski domaine. There is a reasonably inexpensive helicopter right over there.

To reach the snowboarding at Alpe d'Huez by air, try to fly into Grenoble or Lyon. There is daily bus service from Grenoble to Alpe d'Huez. While most snowboarders tend to stay right in the village of Alpe d'Huez, it isn't very quaint with all the concrete, purpose-built resorts. You may want to consider the older vilage of Vaujany, which has several major lifts making it quick to get up to the best snowboarding in Alpe d'Huez.

Overall, Alpe d Huez is the 34th most popular snowboard & freeride destination of all 52 snowboarding resorts in France. 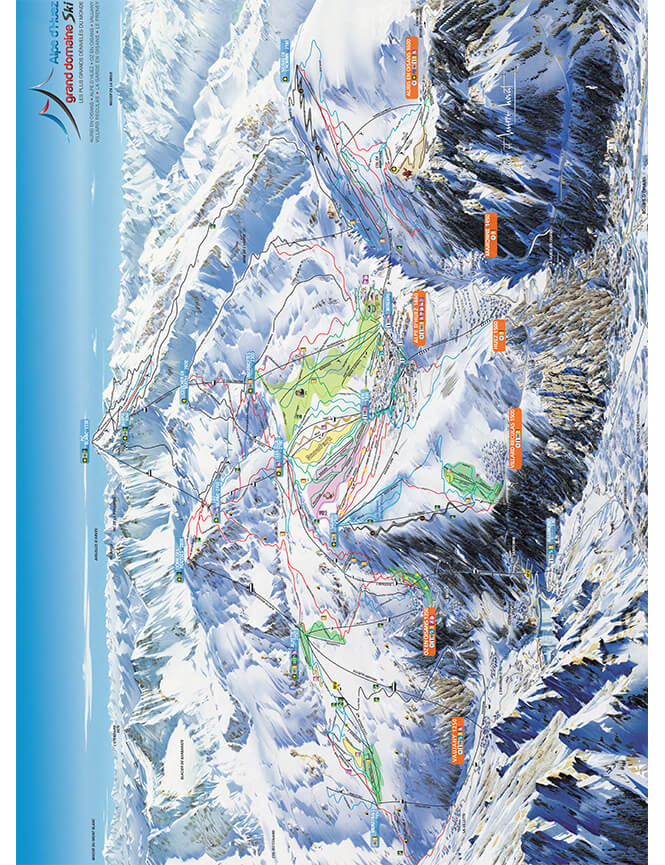