The 26th most popular snowboarding destination in France.

Southeast of Chambery and Bourg d'Oisans, the Les Deux Alpes ski domaine has 150km of pistes that are served by 53 lifts with a maximum vertical descent of 2,270m. Les Deux Alpes links the two villages of Venosc and Mont de Lans. While the Les Deux Alpes ski domaine is best known by snowboarders for its summer riding, it is also known during the winter for its easy intermediate pistes above treeline. This includes the 17km long, but gentle descent of 2,270m from the Dome De La Lauze summit down to Mon-de-Lans. The more gentle above treeline pistes are known to be windy and there can be very low visibility in bad weather. Oddly, as you descend towards the base, the pistes become steeper and usually more icy.

Generally, the layout of the Les Deux Alpes (aka L2A) is a narrow ski domain that sadly rides like a small area. In case you find yourself needing more to shred, the six-day lift pass comes with a couple days at other nearby ski ares including La Grave, Alpe d'Huez, Montgenevre and Serre-Chevalier. From the summit of L2A, it is actually possible to hike or catch a snowcat tow over to the summit of La Grave. Keep in mind the tow is one-way from L2A towards La Grave, so you'll have to hike back.

When snowboarding Les Deux Alpes 3600, you'll be pleasantly surprised to find 1,400 hectares of off-piste terrain. There are numerous off-piste routes that are even shown on the older piste maps. First, check out the Clots de Chalance route from the Serre Pallas piste below the glacier that descends 1,000m down to the Fee 1 piste. Second, you'll want to try freeriding the North Rachas zone that is accessed from a traverse at the top of the Grand Couloir piste. It starts with an open bowl that leads into one three couloirs varying in level of difficulty. Third, there are some good off-piste freerides on either side of the Bellecombes piste, but watch out for the small cliffs. Fourth, from the Super Diable base, you can head left out of the ski area for off-piste riding before you'll eventually reconnect with the Diable piste well below. Lastly, there is a nice descent from the summit down to St Christophe but it requires a ridee back to the L2A lift system.

For the freestylers in your crew, they'll want to head to Freestyle Land off the Toura chairlift. While there are some other park elements around the ski area, the Freestyle Land terrain park at 2600m is where you'll find the main action with multiple lines to session.

Cons
• Remote location.
• All above treeline riding.
• No real base village.

After a long morning of snowboarding, try looking for lunch at either Chalet la Fee or Diable au Couer. When you're ready for some apres ski action, you can check out Smokey Joes, Pano Bar La Toura, and then over to the Yeti Bar. And for nightlife, head on over to the Secret L'Avalanche followed by Smithy's. When looking for accomodations, try to stay near the Diable lift and near Jandri gondola.

PRO TIP: A multi-day pass also works for a day at Alpes-d'Huez and there is a reasonable helicopter ride over there.

Overall, Les Deux Alpes is the 26th most popular snowboard & freeride destination of all 53 snowboarding resorts in France. 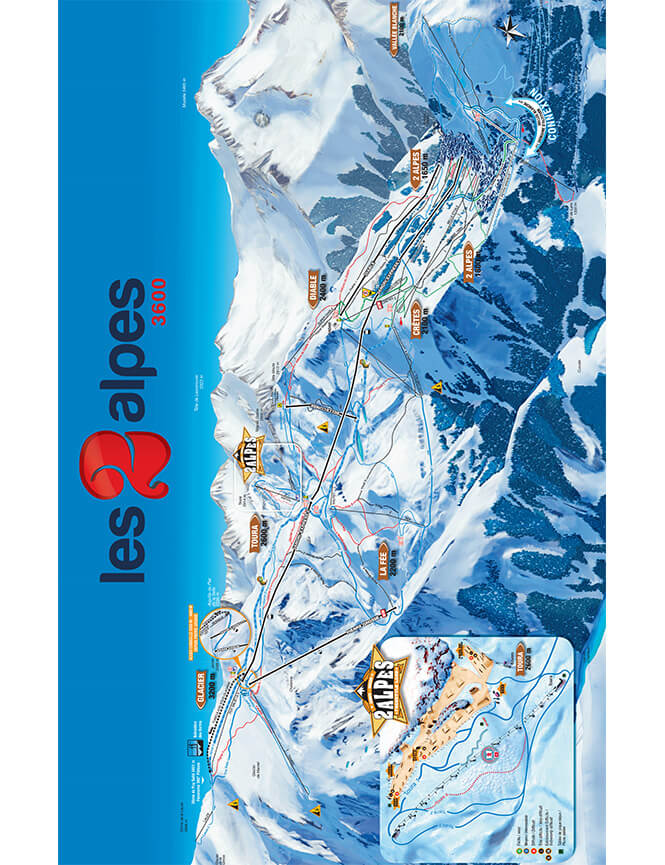