The 31st most popular snowboarding destination in France.

Southeast of Grenoble and northeast of Briancon, the Montgenevre ski domaine has 110km of pistes served by 32 lifts with a maximum vertical descent of 950m. Along the Italian border, it is known for its intermediate cruisers and reliable snow. Sadly, it is also known for brutally slow lifts. Overall, the level of difficulty ranges from 45% beginner to 40% intermediate to 15% expert terrain. The best Montgenevre snowboarding is during the months from January to March.

For some challenge, try the Free Ride Zone in Les Gondrans sector, which is ungroomed off-piste but avalanche-controlled. Also, there is a good off-piste freeride route from the top of the Rocher de l'Aigle lift following the bowl to the Brousset Lift. In addition, there are also a heli-ski operation to provide access to untracked backcountry.

The Montgenevre ski domaine is part of the massive Vialattea ski arena. The Vialattea consists of several lift-interconnected ski domaines including Sestriere, Pragelato, Sauze d'Oulx, Sansicario, Cesana, Calviere and Montgenevre in France. Overall, Vialattea offers 238 pistes served by 70 lifts accessing a maximum vertical descent of 1500m. Note: some of the lifts between Montgenevre and the other Vialattea ski areas in Italy may be closed for repairs.

Many snowboarders consider Sestriere to be the main resort of Vialattea, but is it known as an uncharming, purpose-built resort village. Not that Montgenevre is particularly charming either. The Claviere base area may be the best option. Once onsite, a great way to explore the entire Vialattea is by following the 70km Giro Della Vialattea ski safari route that loops through all of the ski domaines in the ski arena.

Also known as the Milky Way ski arena, Vialattea is typically pretty quiet on the weekdays and slammed on the weekends with day trippers coming up from Turin. While it is recommended to snowboard here on the weekdays to avoid long lift lines and crowded slopes, the apres ski scene is absolutely dead. So, if you're looking for a party scene, you'll want to include at least a Friday or Saturday evening.

Even with the limited advanced terrain around Montgenevre, there is challenging off-piste and heli-ski opportunities for expert snowboarders with avalanche awareness training. It does boast the best snow depth and quality within the Vialattea ski arena.

After a long day of snowboarding at Montegenevre, the best option for apres ski is at Le Graal. While Montgenevre is not known for its nightlife, you can try the Blue Night. The weekday scene is pretty low key and the weekends are slammed.

PRO TIP: The six-day pass also includes days at Les Deus Alps, Alp d'Huez and Serre-Chevalier. All of these alternate ski area are not too far away from Mongenevre. 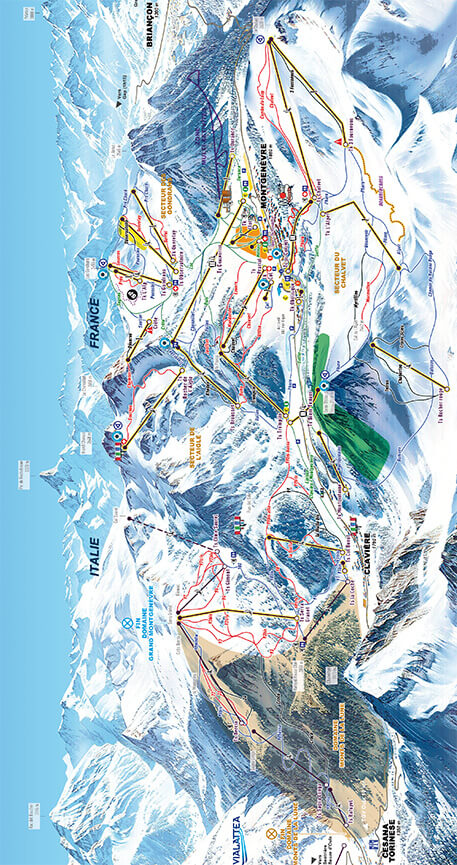