The 17th most popular snowboarding destination in France.

Southeast of Chambery and Moutiers, the Meribel ski domaine has 150km of pistes served by 42 lifts with a maximum vertical descent of 1,550m (5,100 feet). The Meribel ski domaine interconnects several villages in the valley including the three main Meribel villages, Brides Les Baines, Les Allues and La Raffort. The village of Meribel Centre is a purpose-built resort with no old-world charm you might be expecting.

The Meribel is part of Les Trois Vallees ski arena that accesses 600km of pistes served by 173 lifts with a maximum vertical descent of 1,980m (6,500 feet). Meribel is the central valley in the Les Trois Vallees ski arena, so it makes a great base. The Meribel ski domaine itself is not known for its steeps and is more ideal for intermediate snowboarders. So you'll need to snowboard across into Val Thorens for some real challenge.

On a pow day, there is a great spot located off the top of Roc de Tougne drag lift, and also on the face of Mount Vallon.

If you're looking to drop into the terrain park, Meribel does have an excellent park known as Area 43.

After a morning of shredding, grab some lunch at the on-mountain Les Rhododendrons at the top of Altiport.

Before heading back to Meribel at the end of the day, keep in mind that there is a difference between the centre of Meribel and Meribel Village. There are plenty of signs point to Meribel Village which might not be where you want to go.

While Meribel may not be known for steeps, it is known for its apres ski scene. Try starting off at the on-mountain at La Folie-Douce located just below the Saline Express mid-station. Then, ride on down to the Rond-Point bar accessible from just below the Rhodos mid station.

To reach the snowboarding at the Meribel ski domaine by air, fly in to Lyon Saint Exupery airport. Take the train to Moutiers Salin Brides les Bains and then the hourly bus 18km to Meribel. In addition, there is a shuttle bus from Lyon Saint Exupery airport to Meribel that operates on Friday, Saturday and Sunday only. The village of Meribel Centre is the best location, and inparticular, the Chalet-Hotel de L'Adray make a great base right in the slopes. There is a convenient ski bus that loops through the Meribel villages.

Note, there are access lifts from the lower valley town of Brides-Les Bains. Also, you may find that Meribel is quite popular with tourists from the UK, so it may not be quite the classical French resort experience.

TIP: If you are planning to arrive by train, keep in mind that the regular bus up to the resort is primarily during daylight hours. After dark, the bus runs infrequently, if at all. Therefore, you will need to take a cab from the train station to the resort. If you plan to fly into Lyon, you may want to check the train schedule before buying your flight to make sure there is a convenient transfer. If you plan to arrive Friday through Sunday, the shuttle Altibus might be a more convenient option. Since there are not many trains or buses up into this region, you are highly encouraged to advance purchase tickets and reserve your seat. 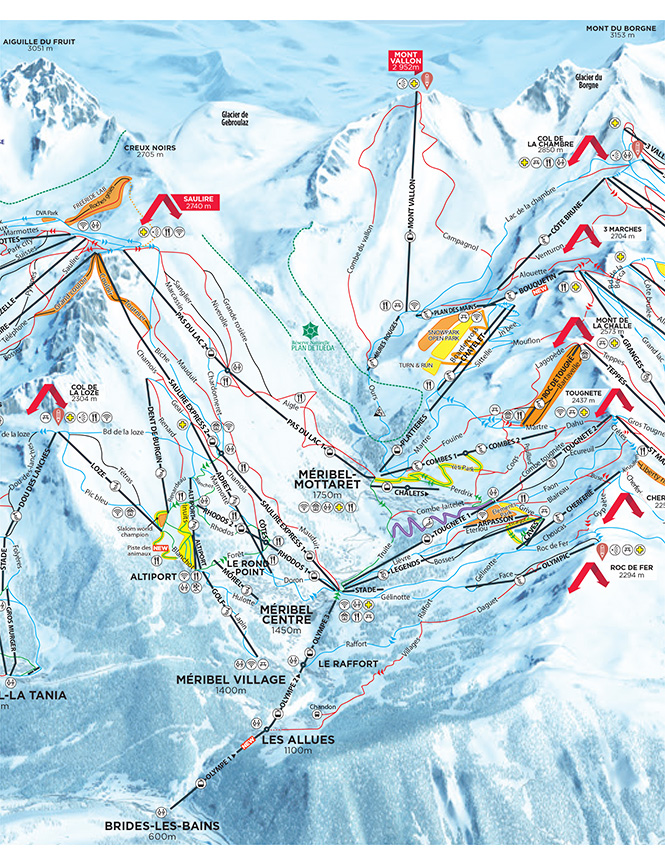