The 23rd most popular snowboarding destination in Italy.

Southeast of Brunico and Dobbiaco in the Pustertal, the 3 Zinnen Dolomites consists of four non-connected ski centers. The largest of the ski areas is located above the village of Sexton. There are future plans to lift-interconnect that ski area to the south with Padola (Val Comelico) and to the east over to Sillian, Austria, via Hochgruben (2538m). The pistes are usually pretty empty on weekdays and known to be slammed on the weekends. There is very limited off-piste snowboarding and very limited expert groomers. But, with that said, they are known to have one of the steepest black runs in Italy. Many feel that the 3 Zinnen area gets more snowfall annually than any other resort in the Dolomites.

There is convenient train access through out the Pustertal from Bruneck (accessible by train from Innsbruck or Venice). The quaint historic town of San Candido/Innichen is on the train line and makes a great base. However, it does require a short train ride or bus to the lifts. Alternately, another option is to take the bus up to Sexten im Hochpustertal from the train and stay there close to the lifts. It is also considered charming and authentic.

PRO TIP: For daytrippers coming on the train from Bruneck, use the Versciaco Elmo / Vierschach Helm station which has direct access to the gondola. 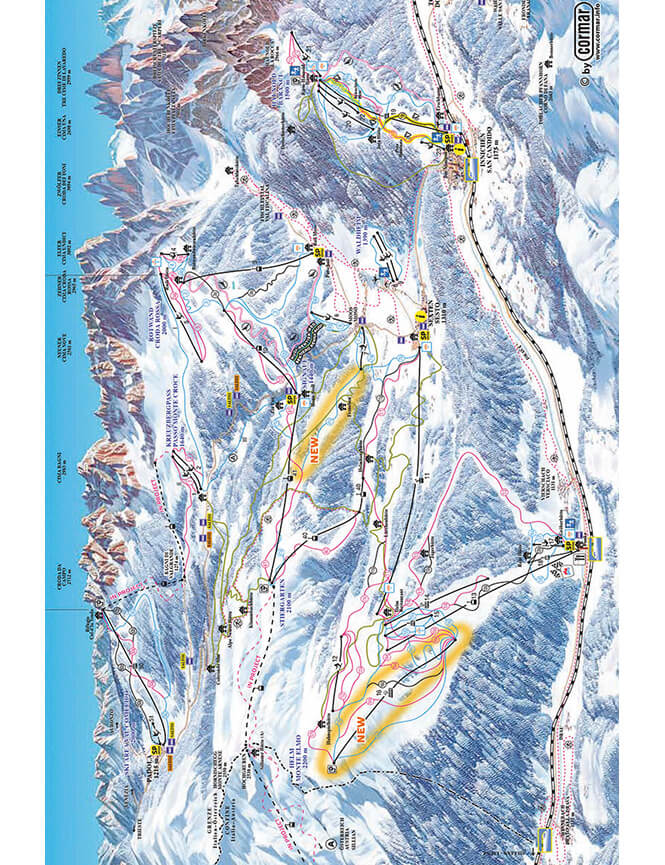