The 15th most popular snowboarding destination in Italy.

South of Brunico in the Pustertal, the Kronplatz (Plan de Crones) ski area has 44 pistes totaling 78km served by 32 lifts with a maximum vertical descent of 1,325m. As a weekender, family-friendly ski area, it is known as a beginner/intermediates mountain with limited expert level and off-piste terrain. The best Kronplatz snowboarding can be found during the months of January and February. Agressive snowboarders enjoy the big five black pistes which include Piculin, Sylvester, Herrnegg, Pre da Peres, and Erta.

For the freestyle snowboarders in your crew, the Kronplatz ski area has two terrain parks to session. The southeast facing Kronplatz Snow Park is located between the Plateau and Belvedere slopes, and is served by the Belvedere gondola. It is designed for beginner to intermediate snowboarders with easy and medium lines, along with a Family Fun line. There are kickers, boxes and rails. The more challenging Korer Park is located near the valley station in Bruneck/Reischach off the Korer gondola. It is known for its link of 6m boxes.

If you are looking for apres ski action, check out the Biwacco Hut on the mountain. Afterwards, you'll want to cruise down to either K1 Bar at the Reischach base area or the Gassl at the Olang base.

The Kronplatz ski area has numerous access points spread around the mountain. In the Pustertal valley, there is an excellent local train line running east-west along the valley floor. So it is possible to stay in the larger city of Bruneck and take the train daily to snowboard at Kronplatz. For direct access from the train, the station in Percha has a built-in ski lift station for convenience. There are also a few loding options in the very small village of Percha. For a more quaint village experience, you'll want to consider staying in either Reishach or San Vigilio, which are accessible by bus from Bruneck. The latter village of San Vigilio has some charm and also accesses another Dolomiti Superski area to the west from town heading to Piccolino. However, San Vigillo requires a bus to reach from the Brunico train station.

PRO TIP: Further east in the Pustertal along the train line is the massive 3 Zinnen ski arena. It's only a 20 minute train ride from Percha to 3 Zinnen. Alternately, if you're staying in San Vigilo, you can snowboard west over to Piccolino and then catch a 20 minute ski bus connecting to the Alta Badia ski area. 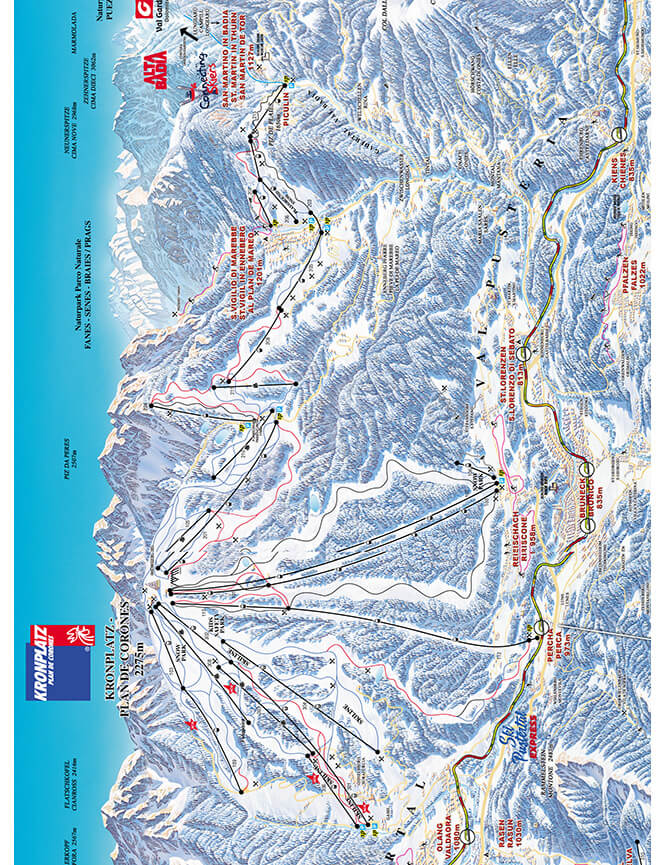