The 21st most popular snowboarding destination in Switzerland.

Southeast of Zurich and Chur, the Arosa ski area has 25 pistes totaling 70km that are served by 12 lifts accessing 914m of vertical descent. Located in the Schanfigg Valley, this family-friendly ski area is popular with beginner and intermediate snowboarders. When it comes to the maximum vertical descent, don't plan on doing 914m laps. With lift lines and piste layout, the effective typical vertical is more like 650m. The slopes are located to the west of the village and are split with 56% intermediate and 6% difficult. To make things even more enticing, there is now a traverse gondola interconnecting Arosa with the slopes at Lenzerheide to the southwest. This newer connection from Arosa Hornli to Parpaner Rothorn opens up the expansive snowboarding lines above Lenzerheide. It is important to note that it doesn't take much wind to close all the lifts except for the Weisshorn cable car.

If you are looking for some challenge, Arosa also has an amazing 40km of ungroomed pistes open to freeriding. There are freeride ski routes off all three summits including off the so-called "Freeride Mountain" Bruggerhorn (2477m), Weisshorn (2653m), and Hornli (2511m) with Routes 1A, 3A, 12, 12A. When it comes to off-pistes lines, there are some hardcore, guide-recommended backcountry routes right off the backside via the North Faces.

The Arosa-Lenzerheide Ski Safari isn't like other resort ski safaris which just tour the groomed trails. The Arosa-Lenzerheide Ski Safari is an off-piste route from the Rothorn summit above Lenzerheide that descents to Arosa and then down to the quaint village of Tschiertschen. Overall, this ungroomed, unmarked route descends 3000m of deep snow lines. Starting from the Rothorn summit, the first section is a 1000m off-piste descent down to the Hornli Express lift bottom station. After ascending the Hornli Express and then traversing the Urdenbahn cable car, head north on the long off-piste 1200m descent to Tschiertschen. Next, use the Gürgaletsch lift to head back up before the final off-piste descent to either Churwalden or Parpan.

Another major undertaking is the Moilinis route starting from behind Bruggerhorn. It drops through rolling bowls and steep forests for a 1600m descent over 6km into Moilinis down in the Schanfigg Valley.

For the freestylers in your crew, there are two terrain parks in Arosa and also two over in Lenzerheide. The Arosa parks include the Park n Pipe Tschuggen and the Wood Ranch. The Park n Pipe Tschuggen has three lines of varied difficulty and also a mini-pipe. The Wood Ranch is ocated on the descent into the Weisshornbahn valley and makes use of natural features through a fir pine forest.

There are a couple good on-mountain restaurants to feed the machine from a long morning of snowboarding. You'll want to try either Alpenblick, Sattelhutte, or inside at the Carmennhutte.

After a long day of snowboarding at Arosa, don't get too riled up for a wild apres ski scene - this isn't the place. But, you'll definitely want to try starting off on the mountain at centrally located Kuh Bar under the Kulm Gondola or up above at the Carmennhutte outside terrace. Then, your best bet is at the Innerarosa base area where you'll find Bruggli Bar. For an authentic local dinner, try heading over to the Restaurant Burestübli (Hotel Arlenwald) or Kachelofa-Stübli (Waldhotel). For some nightlife in Arosa, check out either the Nuts Club or Kitchen Club, but again, don't expect much action.

Arosa can be divided into two zones called Innerarosa and Ausserarosa. The older Innerarosa is considered the typical main base area, while slightly down valley is Ausserarosa where the train station is located. There is a free regular daytime shuttle bus between the villages along the main road - it does not go to any of the main hotel side roads on the hillsides above and below the main road. Both base areas provide direct access to the lifts. When coming down off the mountain at the end of the day, watch out for the deadend pistes with no return lift access or bus including Route 1H and 11H.

Even with Innerarosa and Ausserarosa, you really don't get a sense of a real town center from a historic stand point. Arosa is terraced along a steep hillside with the main road splitting the middle. Many hotels are steeply well above or below the main access road making walking very difficult. Choosing lodging can be challenging since you'll want to both 1) be on the main road for ski bus access but 2) also be near a main ski lift base like Hornli Gondola or Weisshorn cable car. Don't even consider staying on a road above or below the main drag (even if ski-in / ski-out) or you'll end up doing a lot of climbing or taking one of the crazy expensive local taxis.

To reach the snowboarding in Arosa from Zurich by car, head south on A3 to A13 toward Chur (130km). In Chur, head east on the winding road up to Arosa (30km). This is a very, very long drive which can be treacherous if there is any fresh snow. To reach Arosa from Zurich by train, start from the main Zurich train station and take the hourly train to Chur. In Chur, transfer trains to the Rhaetian Railway, which is a slow one hour ride to Arosa on a single track line. Once in Arosa, try to take the public bus to your hotel if possible since the local taxis are shockingly expensive. 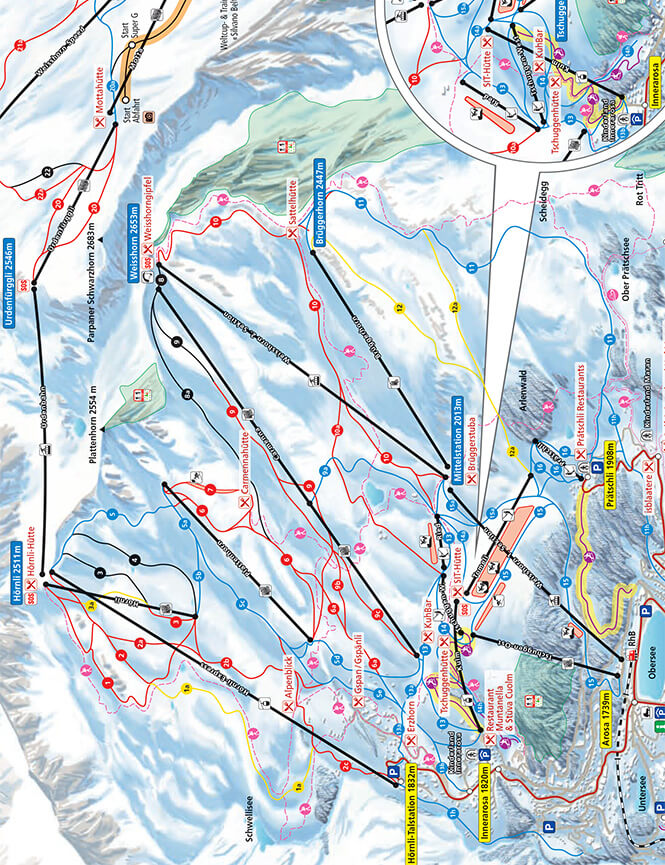