The 51st most popular snowboarding destination in Switzerland.

Northeast of Martigny and northwest of Sierre, the Crans-Montana ski area has 50 pistes totaling 142km that are served by 24 lifts with a maximum descent of 1,400m. Most of the pistes are above treeline offering scenic vistas of the high alps to the south. This is a high-elevation ski resort known for excellent snowfall. While Crans-Montana is known as a uncrowded family-friendly intermediates paradise, keep in mind that a large percentage of the lifts are drag-lifts. Even though there are plenty of beginner and intermediate pistes, hardcore snowboarders will find plenty of ungroomed ski routes and side-country freeride terrain to explore.

As it sounds, Crans-Montana is really a combination of two main interlinked villages of Crans-sur-Sierre and Montana. Both villages are located just west of the Röschtigraben (rösti line) in the French-speaking Romandy region (La Suisse Romande). Overall, the ski resort is divided into four sectors including Crans, Montana, Barzettes-Violettes and Aminona (no return lift - ski bus stop). There is a free ski bus every 20 minutes between the base lifts in each of the aforementioned four sectors. The village of Crans-sur-Sierre is typically considered the main base village of the resort though not near the funicular down to Sierre (533m). None of the villages are well-known for that quaint Swiss village charm, and there is a surprisingly high percentage of second-homeowners who come up and don't even ski. With so many predominantly south facing slope, the snow quality on these sun-baked pistes can be variable to say the least.

One of the more popular routes is the challenging 12km piste from Plaine Morte down to the Barzettes base. Just keep in mind that the cable car up to Plaine Morte will be closed if its windy or if there has been more than just a dusting of snow overnight. Similarly, many of the black groomers and ski routes will be closed if more than 15cm of fresh snow has fallen overnight.

If you are looking for some challenging pistes, the steeper routes can be found in the remote Aminona sector. This base area does not have a lift and requires a bus back to the other sectors. Also, many of the Aminona sector pistes close if there is even minimal fresh snow overnight. On the first blue bird day after a pow day, head up to Petit Mont Bonvin and watch for the opening of Ski Route 22B towards La Teche hut on the way down to Aminona.

On a pow day, you'll want to head up the Barzettes-Violettes gondola very early and then head to either the Toula lift or the Plaine Morte lift (if you have a guide, the off-piste lines below Petit Mont Bonvin can be good too). The best Crans-Montana off-piste snowboarding can be found at 1) La Toula, 2) Chesteron, 3) La Tza and 4) Col du Pochet to Les Violettes. Truly advanced or expert snowboarders may want to hire a guide to explore the steep off-piste terrain of Les Faverges, which is accessible from the southeast end of the glacier. If that's not enough for you, there is heli-snowboarding available through Air Glacier from the base.

If you're into freestyle snowboarding at Crans Montana, there is a 50000 square meter terrain park that is considered to be one of the best in the Alps. It has plenty of jumps, rails, boxes and rainbow rails. In addition, there is a halfpipe and a SBX course.

After a long morning of shredding, try grabbing an on-mountain lunch at Etape de Lourantse hut, the Cabane de la Tieche, or the Cabane des Violettes. As one might expect from an upscale family-friendly resort, there is minimal apres ski action to be found especially at the lift bases, weekdays or overcast/snowy days. The best option is to look for a hütte somewhere on the mountain that is open past 3pm. For some apres ski action, try checking out the Zero Dix at the Crans Base, the Punch Bar, the New Pub or the Number Two Bar. For nightlife, the best bets are Amadeus, Monk's, Xellent and Pacha. With that all said, don't expect too much since the action is usually pretty quiet. If you find a place going off on your last run down, stop and hangout there before descending to the base area.

Oddly, it's not easy picking where to stay when visiting Crans Montana ski area. The two natural choices for lodging would seem to be near the Montana or Crans lift bases. But, there really aren't too many hotel options near the lift bases since it's mainly vacation rentals and second homes. Both villages have their own benefits and challenges. Montana seems like a larger village with more hotels, restaurants and shops. Plus, it's closer to the SMC funicular down to the Sierra train station. But, the access to the lifts is a hassle when factoring in all the stairs and the long escalator just to reach a short gondola up to yet another chair just to reach mid-mountain. On the other hand, the Crans base is much quieter and much further from the funicular, but it has a fast gondola (without all those pesky access stairs) that speeds you directly up to mid-mountain. Plus, Crans is closer to the bus leading across the plateau to the nearby Anzere ski area as a bonus.

Alternately, you could stay down in Sierre near the train station. While Sierre is exactly a ski town, it does make a great base for exploring multiple ski areas (if that's important to you). Sierre is a central location for trains, bus and funicular. Sierre is about equidistant time-wise between the lifts at Crans Montana (45 min) or Anzere (40 min) or Val d'Annivers (55 min) or Leukerbad (40 min). And, no surprise, the round trip public transport cost is roughly similar. By the way, before you consider staying in Sierre for Crans, there's a time and cost penalty. Between the round trip funicular travel time, the wait time for the funicular and the wait time for the ski bus, it probably adds 90 minutes round trip to staying down in Sierre. Plus, it's over 25 CHF round trip.

To reach the snowboarding in Crans-Montana from Geneva airport, take the train to Sierre (2 hours). It is a 5 minute walk to the SMC Funiculaire railway base station railway up to the Montana (not part of the ski pass). The funicular departs every 30 minutes or so, and takes between 15-25 minutes (make sure to take the express train). The Montana funicular top station is still about a 15 min uphill walk to the lifts. Luckily, there is a free SMC ski bus stop across the street that runs every 20 minutes. It's two stops away to the Ycoors stop for the info center and then entrance to the long escalator (and stairs) up to the Montana gondola lift base.

PRO TIP: If you are staying in Montana, make sure you know how to find the Montana Grand Signal gondola lift base the night before. It's really not easy to find. There is a hidden passage way, and even then, you'll need to follow a tunnel to stair to a few ramps. You don't want to be hunting around on a pow day morning. 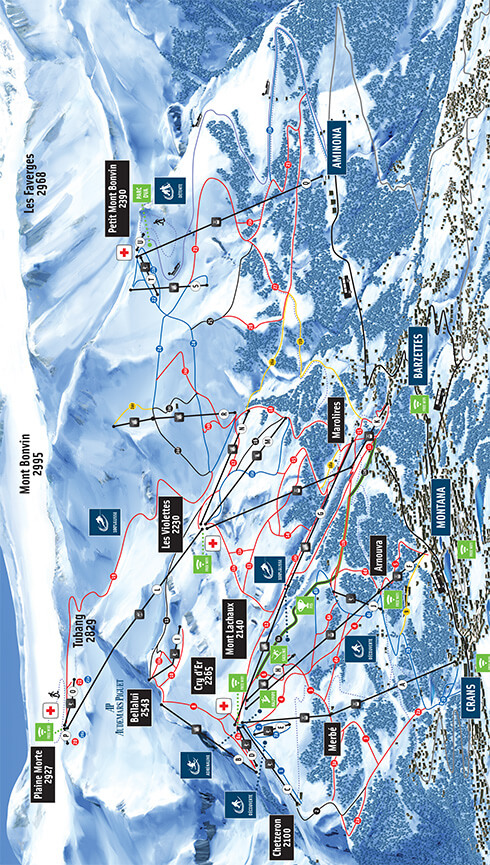