The 22nd most popular snowboarding destination in Italy.

North of Turin and northeast of Aosta, the Champoluc ski domaine is well known with local freeriders for its massive, legal off-piste snowboarding. The Champoluc ski domaine is known as the highest ski area in the Alps and is over 16km wide. When heading off-piste, you'll want to start by hiring a guide -- ask them about Col d'Olen. In addition to the lift-accessed off-piste, there are heli-ski opportunties. The best Champoluc snowboarding can be found during the months of January and February.

A main draw to Champoluc are the popular off-piste lines that start from the top station of the Indren cable car (extra fee required). Oddly, the off-piste lines are shown with green lines on the map (ski routes), such as those from Passo Salati and Coll Betta Forca.

The Champoluc ski domain is situated on the western side of the greater Monterosa Ski Consortium. Monterosa spans 20km across three major valleys to interconnect with lifts the villages of Alagna, Gressoney and Champoluc. In addition, there are several smaller ski areas that are interconnected by bus (Champorcher, Frachey, Brusson, Antagnod). With the lift and bus interconnects, there are 88 pistes totalling 80km that are served by 32 lifts and are accessible under one ski pass. While there are plenty of groomed intermediate slopes, the real attraction Monterosa to snowboarders is the extensive off-piste freeriding routes spread across the three valleys, such as the 1000m descent off Indren. Make sure to pay attention to the winds and forecasts during the day since high winds will close the interconnecting lifts between valleys.

Overall, Monterosa is not well known for deep snowpack, but it is very powdery when it comes due to the high elevation of the pistes. The villages and slopes are known to be quiet during the week with limited nightlife even on the weekends. If you're looking for a long warmup run, try the piste from Passo Sacati down 1760m over 7km into Alagna.

After a long morning of shredding at Champoluc, grab lunch on-mountain at Rifugio Guglielmina, Aroula above Crest, or Frantze Le Rascard below Crest. For apres ski action, check out Atelher Gourmand. For nightlife, you can check out Pachamama.

Located in the Ayas Valley, the village of Champoluc is a purpose-built resort, which is not nearly as charming as those in the Gressoney valley. It is interconnected by bus with several smaller ski areas located in Frachey, Brusson and Antagnod, which is nice on those days when Champoluc's high lifts are closed. A six-day ski pass for Monterosa includes 2 days at other Aosta Valley ski areas in case you feel like taking the long bus ride back down valley.

To reach the snowboarding in Champuloc by air, the two nearest airports are Turin Caselle (TRN) and Milan Malpensa (MXP). The Turin airport is served by European airlines, and the Milan Malpensa airport is served by both European and major international airlines. While a rental car is fast and convenient with a sense of independence for getting to the ski resort, it can be a huge source of stress with complex road network navigation, locating the expensive resort overnight parking, and challenges with narrow roads during poor winter weather. But, unlike the easy public train and bus options for Swiss and Austria ski resorts, the public transport options out of Milan and Turin are very complex with difficult connections from multiple non-integrated transportation companies. While driving can be a couple hours, the public transportation options stretch into 4-7 hours of additional travel.

From Milan Malpensa airport, the only train option is the Malpensa Express leading into downtown Milano Centrale (45 minute ride every 30 minutes). From Milano Centrale, take the train to Chivasso (may require a connection) where you will change trains leading up into Valle d'Aosta. The main train stops in Valle d'Aosta for public buses up to ski resorts provided by Arriva Savada (savda.it) include Verres train station for Brusson and Champoluc ski areas. So, in all, it could take five trains plus a final bus. Alternately, if your time works right, there is bus service that skips the trains directly to the final train station mentioned from Arriva Savada (savda.it), which runs three times a day during winter months. From the train station in Verres, there is a bus heading to Champoluc (1 hour).

PRO TIP: There is a proposal to interconnect Champoluc to Valtournenche to the northwest via a gondola. Make sure to check with the ski areas before coming about this proposed interconnect. 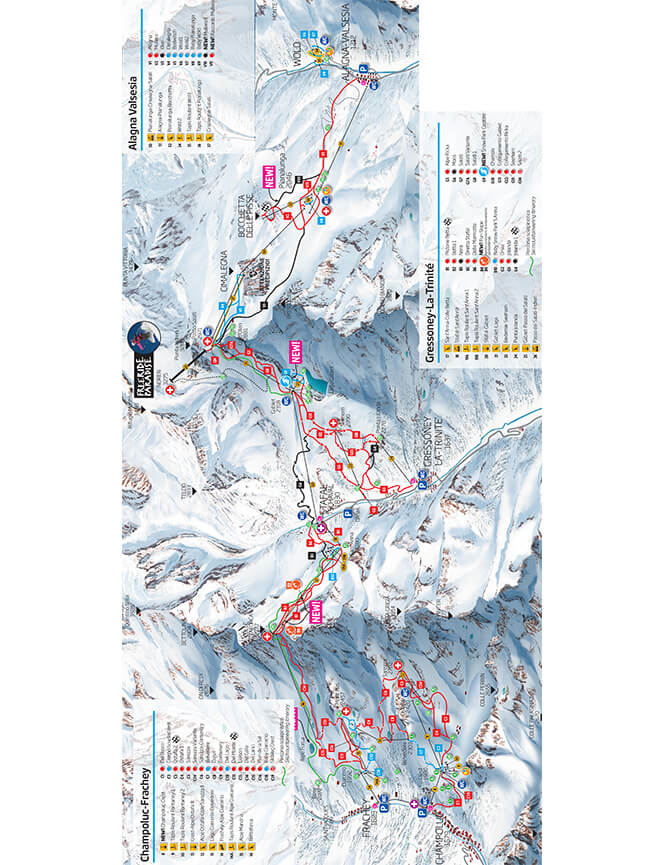