The 30th most popular snowboarding destination in Italy.

North of Lake Como and west of St Moritz on the Swiss border, the Madesimo-Valchiavenna ski area has 29 pistes totaling 37km that are served by 10 lifts with a maximum vertical descent of 1,500m. Most of the snowboarding is high on the mountain from the base. You'll need to use the funicular to uplift and down-lift to Cortl. The best Valchiavenna snowboarding can be found during the months of January and February.

The Madesimo-Valchiavenna is known for its amazing lift-accessed freeriding. If you are up for off-piste freeriding, the popular Canalone piste from the Pizzo Gruppera summit is now left ungroomed and is considered a freeride route along with its side route called Camosci. If it's your first time exploring the off-piste terrain further from the lifts, you may want to hire a guide on your first freeriding exploration. For expert splitboarders, you'll want to consider the ski touring route #50 (Angeloga piste) from Pizzo Groppera summit down over Paso Angeloga, past Rifugio Chiavenna and dow to Soste. That 10km route is not as steep as the Canalone piste and will require some hiking/skinning. All of the aforementioned pistes are unmarked and uncontroled.

The best base is to stay in the village of Madesimo. After a long day of snowboarding, you can try looking for some apres ski action at the Acquarela.

Overall, Madesimo-Valchiavenna is the 30th most popular snowboard & freeride destination of all 57 snowboarding resorts in Italy. 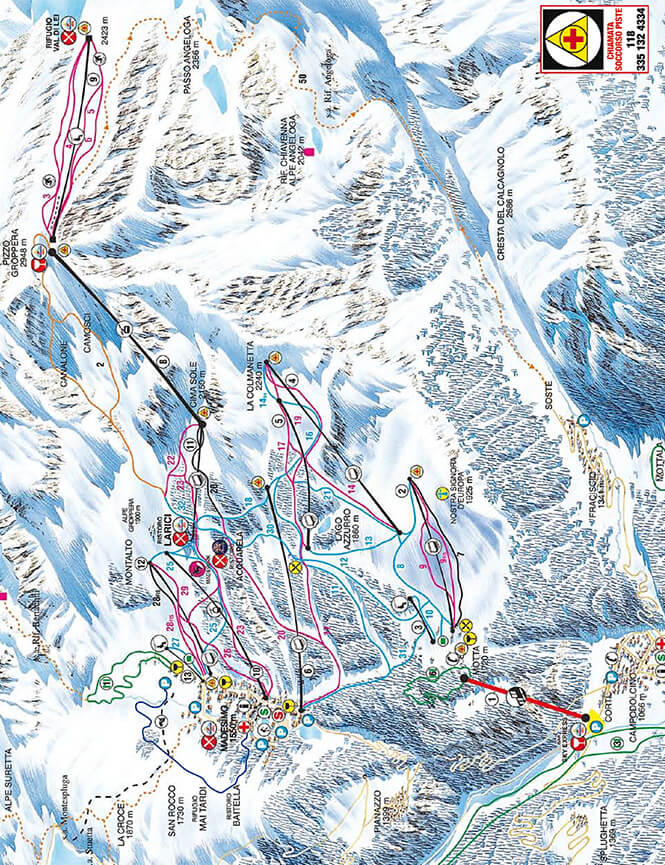