The 34th most popular snowboarding destination in Austria.

Southwest of Innsbruck and north of Neustift, the Schlick 2000 ski area has 16 pistes totaling 20km that are served by 11 lifts with a maximum vertical descent of 1,140m. The pistes offer excellent views of the surrounding Kalkkogel mountains. While relatively unknown, its bowl seems to collect powder and is certainly worth exploring for a couple days of snowboarding. If you are looking for some challenge, check out the marked, but ungroomed, Skiroute Kreuzjoch-Schlick. The longest run at Schlick 2000 is a 3km run the descends all the way to the valley floor. It's a long way to work your way back up to the mid-station, and the run down isn't that great, so most of your day will be spent doing runs from the mid-station on up. Therefore, the effective vertical is really only about 800m, not the quoted 1,140m.

Freestylers will find that there are two terrain parks. The Stubai Park Schlick 2000 is known for its kickers. The Free Nature Park has a naturally formed half-pipe.

After a long morning of shredding, check out some on-mountain lunch at Froneben Alm and Starkenburger Hutte.

For some apres ski action, make sure to stop by Apres Ski Bar Schlussliacht, but don't expect too much on weekdays since there are plenty of day trippers coming up from Innsbruck. For nightlife, head to the Dorf Pub in Neustift, then on to Nachkastl or Scala Club.

While the nearest village to Schlick 2000 is Fulpes, the traditional village of Neustift makes a great base, especially if you'd like to check out the other ski areas in the valley. As you consider a trip to Schlick 2000, there is a proposed lift expansion to interconnect with the the Axamer-Lizum ski area to the northwest.

To reach the snowboarding at Schlick 2000 by air, fly into Innsbruck international airport (INN). There is a quick public bus from the airport through downtown to the Innsbruck main train station, if necessary. Some of the hotels offer a free shuttle bus from the airport. From the Innsbruck main train station, there are regular public Regio Stubai bus #590 that runs up the Stubaital valley. Also, within the Stubaital, there is a free ski bus that runs from Schonberg up to the Stubiaer Mutterberg Station. There are actually two main ski bus lines in the valley, the bus #590 stops in Fulpes but doesn't go up to Schlick 2000. There is another ski bus #2 that runs from Neustift thru Fulpes up to Schlick 2000. While Schlick 2000 doesn't look that far from Fulpes, don't try walking it since it is actually further than you think. 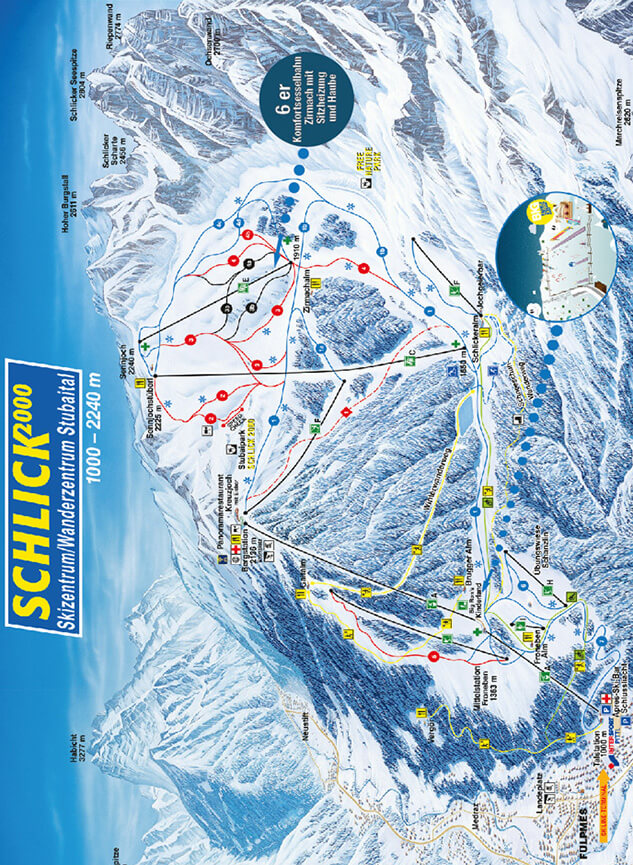