The 39th most popular snowboarding destination in Austria.

Southwest of Innsbruck and southeast of Landeck, the Kaunertal Gletscher ski area has 50km of groomed pistes served by 5 lifts accessing a vertical descent of 1,000m. Plus, there are 36km of ungroomed ski routes to be explored by hardcore snowboarders. While the listed vertical descent is 1,000m, most of the day will be spent doing laps above the mid-station, especially in the mornings when the lower slope are still frozen. In the months of December and January, the sun doesn't really hit the slopes to soften them until 11am.

For the 2021-2022 winter season, the new Weissseejochbahn gondola lift opened up a new peak that was formerly hike-only. It accessed one new groomed piste along with 2 freeride variant lines for a total descent of 550m.

Kaunertal Gletscher is well known for its five inbounds freeriding lines. There are over 36km of lift-accessed freeride ski route variants. These off-piste variants take about 2m of snowpack before they'll open up.

The Variant Weissseejoch ski route starts at the summit of the new Weissseejochbahn lift (3000m). This is the easiest of the seven variant ski routes. It connects up with the lower reach of Black #6 piste. After descending 550m, it finishes at the Oschenalmbahn middle station.

The Variant Weissejaggl ski route starts at the summit of the Karlesjochbahn lift (3000m). This is a moderately difficult line. It flows northeast down to the lower section of Variant Weissseejoch for a 350m descent.

The Variant Zollhaus ski route starts at the summit of the new Weissseejochbahn lift (3000m). This is a moderately difficult line that flows northeast. After descending 550m, it finishes at the Oschenalmbahn middle station.

The Variant Hinterer Norderberg ski route starts at the top of the Norderjoch I lift. It begins with a half hour hike along the old Norderjoch II lift line to the Norderjoch pass (there may be a ski cat transport available). Once on the pass, the ski route drops into Norderberg valley for a 1135m descent to the north towards Fernergries bus stop. This is a moderately difficult line.

The Variant Fernergries ski route starts at the Oschenalmbahn middle station. This is a moderately difficult line. It descents 270m to the northeast. It ends at the intersection with the Variant Hinterer Norderberg at Gepatschhaus (usually closed). The final end point is the Fernergries bus stop.

The Kaunertal ski region includes both the Kaunertal Gletscher ski area and the Fendel ski area which are interconnected by a free ski bus (65 min). The Kaunertal Gletscher is for more advanced snowboarding, while the Fendel area is more popular with families. Fendel is situated southeast of Prutz on the Glockturnkamm mountain within the Otztaler Alps. At Kaunertal, there is one of the best terrain parks in all of Europe that is well known for its kickers, rails, halfpipes and tabletops. Kaunertal is probably good for 2 days of snowboarding, but could get a little repetitive beyond that with few lifts and pistes for variety (keep in mind that the Norderjoch II lift on the map has been removed). While Fendel uses the same lift pass, it may be worth skipping it and head across the valley from Prutz to check out the massive Serfaus-Fiss-Ladis ski area.

For the freestyle snowboarders in your crew, Kaunertaler Gletscher has a large terrain park and a halfpipe to session. Located off the Karlesjochbahn lift, the Snowpark Kaunertal is divided into two halves with the upper section having a line of rails and a tank, while the lower section has kickers, rainbows, boxes and a fence wallride. The overall length of the terrain park is almost 2km! Many freeriders consider it to be one of the best in Europe.

There aren't many options for lunch on the mountain except for the two newer self-serve cafes with little apres action. After a long day of snowboarding Kaunertal Gletscher, head down to the Pfiff Alm at Feichtner Hof for some apres ski action or nightlife. Most snowboarders to the valley stay in the village of Feichten, which is a 40 minute ski bus ride from the Kaunertal Gletscher.

To reach the snowboarding at Kaunertal Gletscher ski area by air, fly into Innsbruck international airport (INN). There is a quick public bus from the airport through downtown to the Innsbruck main train station. Then, take the train to the Landeck station, where there is a Post Bus up to Prutz and another Post Bus up to Kaunertal. In addition, there is a free ski bus in the Kaunertal from Prutz up to Kaunertal Gletscher. Don't even consider driving yourself past the village of Fechten since the road becomes a narrow, winding, one-lane road up to the Glacier - just use the free ski bus.

Overall, Kaunertal Gletscher is the 39th most popular snowboard & freeride destination of all 81 snowboarding resorts in Austria. 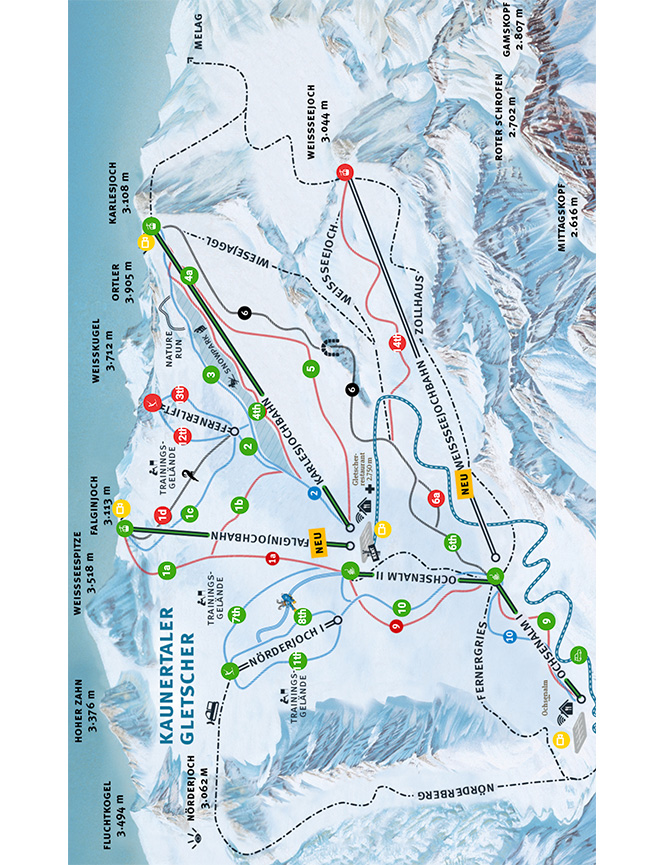