The 68th most popular snowboarding destination in Switzerland.

Southeast of Zurich and southwest of St Moritz, the Corvatsch ski area is where most freeriding snowboarders head to get their fix of off-piste lines. Located about a short 20 minute free ski bus ride from St Moritz Dorf, the Corvatsch ski area is located on a broad glacier and is the least crowded of the nine Engadin ski areas. It has 24 pistes served by 13 lifts with a maximum descent of 1000m. But, with the main mid-stations serving the upper pistes, the effective vertical descent is more on the order of 500-700m. And, snowboarders should be prepared for plenty of t-bar lifts, Poma lifts and numerous traverses. Since none of the groomers are particularly steep, the off-piste lines are what its all about. Matter of fact, the pistes are mostly intermediate and none are difficult when compared to other ski areas.

Up on the glacier, there are two groomed runs and one ungroomed ski route. These glacial routes tend to get wind-blown and icy, and its important to stick near the route markers to avoid crevasses. Overall, the northwest face of Corvatsch serves up the best off-piste terrain and its north-facing slopes have the best snow conditions in the valley. It's the site of the freeride competitions. But, keep in mind that it doesn't take much snow to close the glacier or the entire ski area. If it snows more than a foot overnight, don't expect much to be open.

Even the freestyler in your crew can find something at Corvatsch. The main terrain park called Corvatsch SnowPark is served by the Mandra t-bar near the midstation, and it has plenty of rails and kickers on a progressive flow line.

At the end of the day, follow the long piste Black #5 which leads all the way back to St Moritz Bad (look for some sweet side-country stashes along the route). It has been marketed as a challenging, must-do run, but its really a basic intermediate piste which ends quite a distance from the St Moritz Bad cable car leading up to Corviglia. Make sure to stop halfway down at the Restaurant Hahnsee for some authentic local cuisine.

The St Moritz ski domain is a real paradise for serious snowboarders, but be ready since it is crazy expensive. St Moritz caters to upper-crust, ultra-exclusive clientele, but it's diametrically-opposed to the plentiful off-piste backcountry freeriding available to shredders. Actually, St Moritz should be on every freeriders bucket list. Spread throughout the Upper Engadin valley, there are nine distinct ski areas mainly interconnected by ski-bus along with a few lifts. Of the nine, there are four main ski areas frequented by most tourists snowboarding in St Moritz: Corviglia, Corvatsch, Zuoz and Diavolezza/Lagalb. These resorts offer 88 pistes totaling 350km that are served by 56 lifts (27 t-bar or tow lifts) with a maximum vertical descent of 1,500m. For strong intermediates, a popular route to explore is the Engadin Snow Safari, which follows a 99km route with over 6,600m of vertical descent.

Unfortunately, St Moritz doesn't have much of an apres ski scene to speak of, which is surprising considering how many people are on the mountain every day. The apres ski scene in St Moritz is small. Literally and figuratively. The only action you'll probably find is the dozen riders hanging around the funicular mid-station Alto Bar, which is built inside two side-by-side repurposed cable cars (if the outside grill is still on, get a burger - expensive but amazing). After it closes and before the last funicular train down, head to the base station and look to the right as you descend the stairs for the Gondola Bar, which is also in an old cable car. Make sure to try the "nageln" game in the middle of the bar. If you're looking for a little more high-brow apres scene, continue down the stairs to Schulplatz and bare to the right. All paths lead past the outside Roo Bar at Hotel Hauser, which has insanely priced beer, loud bad music (alternative Soul just doesn't seem to go with the Alps), and plenty of fur-wearing poseurs. If you're getting hungry and looking for an authentic Swiss restaurant, try the Stuva Engiadina, the Chesa Veglia, the Veltliner Keller or the budget Arte Pizza Pasta.

Luckily, St Mortiz is known by poseurs for its late nightlife scene where you need to be seen. Around midnight, you will definitely want to check out the Stubli at the Hotel Scweizerhof, Diamonds at the Kulm Hotel, Kings Club in the Palace Hotel or the Vivai Disco in the Stefani. But, these are not open every night so check their schedules. Oh, and bring your gold credit card - you'll need it. An alternate to the late night bar scene on Fridays is the night skiing from 7pm to 2am - the on-mountain huttes are open with music until close.

St Moritz is located in the far southeastern corner of the Swiss canton of Graubuenden near the Italian border. The wind currents through the Alps tend to bring cooler temperatures to the Upper Engadin valley and produce better snow conditions than other nearby ski areas. The main village is St Moritz Dorf, which has the train station. While there are numerous smaller and less expensive villages in the valley, the real action is in the pricey St Moritz Dorf. You'll love seeing the high-end hotel ski valets in long over coats and caps that stand at attention waiting for guests at the funicular lift bottom station to carry skis back to the hotel for guests.

The main village is St Moritz Dorf isn't known for its old world charm. Most historic buildings were torn down over 20 years ago. The current concrete structures are reminiscent of the urban American "projects". And, the pistes don't even come to town requiring a downlift to finish the day. St Moritz Bad isn't much better either with most lodging a long walk or bus ride to the cable car. While it is normally recommended to stay at a centrally located hotel in the main village, in the case of St Mortiz, you may prefer the more quaint base village of Celerina, or even further out on the ski bus line at Pontresina or Zuoz. Should you choose to stay in St Moritz Dorf, be aware that even the high-end hotels have very small rooms that are smaller than prison cells (think 8 foot by 10 foot cell). And there is a very limited selection of restaurants. Plus, with the train station located well below town and the funicular lift above town, there is plenty of walking to be down. An alternate lodging option is to look for an on-mountain gasthof hutte where you'll find more convenience and better food. Corvatsch ski area is served by the two villages of Sils and Silva Plana. But, the their two respective base lifts are pretty far away and require a ski bus. Neither village has the traditional Swiss charm you may be expecting. If you're taking a ski bus anyways, you might as well stay in the quaint village of Pontresina.

After a long morning of snowboarding at Corvatsch, definitely plan to grab lunch at the Alpetta hutte. And, after a long day, stop by the Hossa Bar at Alp Surlej above the Surlej base for some apres ski action. To reach the St Moritz snowboarding from Zurich by train, start with the hourly train to Chur. Then transfer to the Bernina Express train to St Moritz, which winds thru mountain passes past blue glaciers. The Bernina Express also extends further south to Tirano, Italy, to connect with trains for Milan Malpensa airport.

To reach the snowboarding in St Moritz from Zurich by car, head southeast on Route A3 and then south on Route A13 to Chur. Turn south on road to St. Moritz for 70km. Keep in mind that bad winter weather regularly closes the three high road passes, so taking the train is highly recommended. 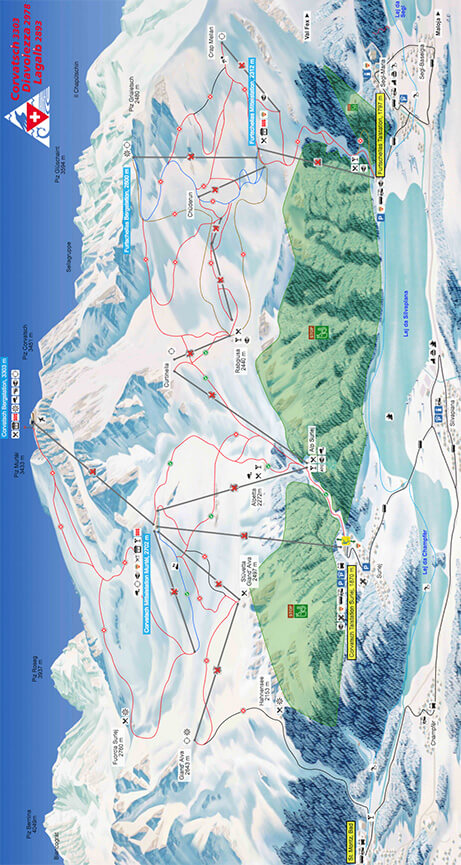