The 67th most popular snowboarding destination in Switzerland.

Southeast of Zurich and south of St Moritz, the Diavolezza/Lagalb ski area has the best freeriding in the Engadin. It is a glacier mountain with epic alpine terrain that is popular mainly with hardcore snowboarders since its the furthest transfer from St Moritz. It is accessible by train from St Moritz (40 min) into either the Bernina Diavolezza or Bernina Lagalb train stations, but keep in mind there are few base area services. The Diavolezza-Lagalb ski area has 12 pistes totaling 35km that are served by 5 lifts with a maximum descent of 1800m. The two base areas of Diavolezza and Lagalb are considered to be interconnected by pistes, but they are flat traverses requiring quite a bit of hiking. When planning your trip to this ski area, keep in mind that it doesn't take much snow to close the place. With just a foot of snow, it may close for several days and, when it does reopen, the popular glacier route can take even more days to reopen.

Speaking of the glacier route, from the Diavolezza cable car summit, the Ski Route #10 heads off the backside of the mountain descending 10km across both the Pers glacier and the Morteratsch glacier on the way down to the Morterastch train station and restaurant. Along the way, the marked but uncontrolled route winds through unusual ice formations and across some flat traverses requiring hiking. You'll need to stay close to the marker poles to avoid glacial crevasses. It is considered the longest glacial descent in Switzerland and typically takes about 45 minutes to get down to the train station, which gets you back to the base area. Keep in mind that the train station is well below the road on the other side of the valley, so you cannot take the bus back to the ski area.

From the summit of the Val Arias lift, there is an unpatrolled freeride route heading southeast down to the Lagalb base area.

Over on Lagalb, head up to the Piz Lagalb summit for the start of the Tour La Rösa. The Tour La Rösa route is an uncontrolled and unmarked freeride route off the back of Piz Lagalb heading south down to La Motta in the Poschiavo valley. It ends at the La Rösa shuttle bus stop. It descends about 960m. In the past, the shuttle bus returns at 10am or 11:30am and reservations are required (+41-81-839-39-39).

After a long morning of snowboarding, grab an on-mountain lunch up at the Bergrestaurant Lagalb (back of Stubli). There really isn't an apres ski scene here since there is only a small base area cafe.

Diavolezza-Lagalb ski area is part of the St Moritz ski domain. Overall, it is a real paradise for serious snowboarders, but be ready since it is crazy expensive. St Moritz caters to upper-crust, ultra-exclusive clientele, but it's diametrically-opposed to the plentiful off-piste backcountry freeriding available to shredders. Actually, St Moritz should be on every freeriders bucket list. Spread throughout the Upper Engadin valley, there are nine distinct ski areas mainly interconnected by ski-bus along with a few lifts. Of the nine, there are four main ski areas frequented by most tourists snowboarding in St Moritz: Corviglia, Corvatsch, Zuoz and Diavolezza/Lagalb. These resorts offer 88 pistes totaling 350km that are served by 56 lifts (27 t-bar or tow lifts) with a maximum vertical descent of 1,500m.

Since St Moritz is about a 40 minute train ride away and it doesn't have much Swiss charm, you may want to stay in the village down valley called Pontresina. It has more of the Swiss charm you may be looking for and has both train and bus stations. There is a free ski bus running up the valley from Pontresina to Diavolezza.

To reach the Diavolezza-Lagalb snowboarding from Zurich by train, start with the hourly train to Chur. Then, transfer to the Bernina Express train towards St Moritz, which winds thru mountain passes past blue glaciers and through long tunnels. Continue on the Bernina Express route heading south to Tirano, Italy (connects with trains for Milan Malpensa airport). There are two train stations serving the ski area including Bernina Diavolezza or Bernina Lagalb. 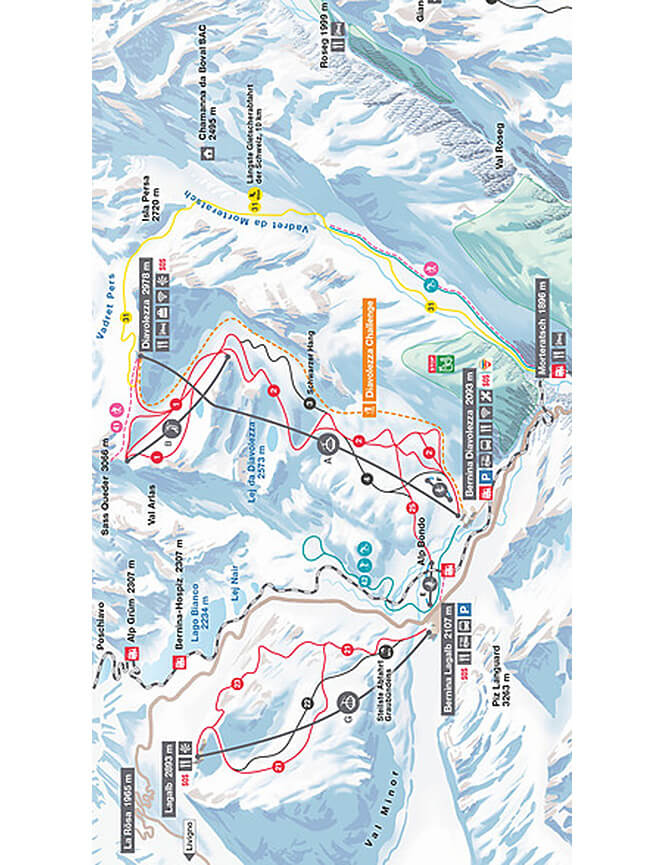